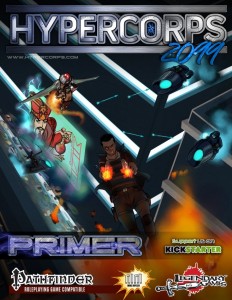 This primer for Hypercorps 2099 clocks in at 21 pages, 1 page front cover, 1 page ToC/Editorial, 1 page SRD, 1 page back cover, leaving us with 17 pages of content, so what’s this about?

So, what is Hypercrops? Beyond being essentially a campaign setting, it can also be pictured as a rules-modification, a template for rules, if you will. Each character receives a hyper score, which unlocks new words of power, grants a hyper bonus, a hero point and hyper abilities. Hyper bonuses? Yes, that would be a new bonus granted through a character’s hyper score. If a character learns to cast a buff via the hyper score, the regular bonus type is replaced with the hyper type, to give you an example. Hyper bonuses stack with themselves and all other bonuses, but the same sources can still not be stacked upon another – no simultaneous aspects of the deity or cat’s grace. Dispel magic can temporarily suppress hyper abilities.

With the obvious escalation of power thus inherent in the very set-up, it should come as no surprise that hero points work more akin to how they did in Arcana Evolved – from auto-successes, to rerolls to doubling actions taken a round, the options provided via hero points are significantly expanded. Hyper Score range from 1 – 10, though this primer, as a teaser for teh KS, obviously only covers the basics.

A second system provided herein would be one that focuses on luck and reputation – two new attributes that can be used to provide rather interesting narrative options, with neat sample examples provided – personally, this interests me infinitely more than the numerical escalation the aforementioned hyper-rules provide.

The pdf then continues to provide a selection of different Hyper-feats, which make pretty much clear that we’re not going for the nit and grit here, but rather for the full-blown super-power – with monster-abilities available via feats, feat-based bodytech-enhancement and extra powers (at the cost of flaws), there are quite a few cool ideas. Since flawed characters tend to be more interesting, we also get a brief glimpse at various flaws – and these, to me, are interesting – I’m looking forward to seeing their implementations.

A total of 5 hyper routes are mentioned herein -Abbernaut (for monstrous tricks), Hypernaut (word of power-use), Meganaut (better hyper attributes), Parallels (SPs) and Savants (skill/feat-jack of all trades) – wait, hyper attributes? Jup, these mean that you can utilize your attributes in unique, super-like ways – faster movement through dexterity, lobbing huge swaths of metal around via Strength – the like. This chapter does look intriguing!

Speaking of rules-changes/templates -Climb and Swim are combined into Athletics. Perception, however, is separated into Awareness and Search and there would also be Knowledge (Technology) and Use Technology and Vehicular Control. You’ll note some ways in which this set-up diverges from the default, but at this point, I cannot judge whether and how well this works out.

The primer also presents some rules for new firearms, molecular whips (*cough* monofilament whips, anyone?*/cough*), hoverboards…you get the idea. Armor may convert AC on a 2-to-1-basis into DR – which, imho, especially considering the significant increase in power, may be too conservative – there is not component in the game as overrated as DR and I think this may prove to be a bit conservative…we’ll see in the final book.

Editing and formatting are pretty good, I noticed no significant glitches, though I considered some blocks a bit harder to read. The pdf comes fully bookmarked for your convenience and the artworks provided are solid, especially considering that this is a free primer for the KS.

Mike Myler’s Hypercorps 2099 has a bit of a hard standing with me. I’m not a fan of super-roleplaiyng and I’m a diehard Shadowrun-fan – I like my cyberpunk dirty, gritty and deadly. That being said, contrary to what I anticipated, I found myself pretty intrigued by quite a few of the concepts presented herein. I’m a big fan of campaign overlays, since they tend to allow for rather complex operations, rules-scavenging and the like – so yes, consider me tentatively interested in this project.

Mike is also a talented designer with quite some experience under his belt, so I do believe that he can pull off some of the complex rules-operations suggested by this pdf. That being said, this is, imho, no primer – it’s a teaser. I do not consider this a primer because, while it introduces the concepts, many of which I consider intriguing, it does not provide enough material for me to properly judge whether they work out in the end – the ideas are there and I’m quite interested to see whether Mike can make like the Words of Power system, which I loathe with a fiery passion. This out of the way, I am tentatively going with a verdict of 4 stars – this is a promising teaser, but as provided, I cannot rate it higher – I simply lack the information required. The ideas are intriguing -so let’s hope this funds!

You can get this free primer here on OBS and here on d20pfsrd.com’s shop!

You can find the kickstarter here!