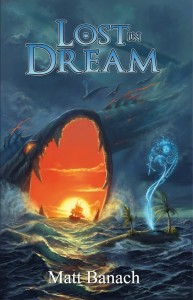 I’m going to deviate a bit from my usual standard here, since Lost in Dream is a fiction book – at 273 pages, 1 page front cover, 3 pages of editorial 1 page ToC, 1 page author bio, 1 page back cover, this one leaves 266 pages of content, so what do we get here?

Before I dive in: This review was moved up my review-queue as a prioritized review at the request of my patreons.

This being a fiction review, I am going to deviate in one crucial point from my usual shtick as a reviewer – I will not tell you explicitly what the story is about. Instead, I will try to give you a general idea and analyze the respective characters and plot according to my skills. Lost in Dream, first and foremost, is a novel set in the Dreamlands also shared by the legendary Coliseum Morpheuon; and yes, I purposefully evoked the Dreamlands here, not the Plane of Dreams – this is, very much in its tone and originality, a novel seeking to evoke the sheer wonder and grotesquery of H.P. Lovecraft’s legendary story – and it actually succeeds in this endeavor for the most part; unlike it, though, we begin in medias res in the company of a man called Rube (probably not coincidentally named akin to the famous Cartoonist…) and his daughter, as they’re standing aboard a vessel of the dread Denizens of Leng, watching a titanic sea monster gobble up telepathic whales…but as so often in dreams, things are not as they seem.

You see, one of the big strengths of this novel lies in the way that the prose, by omission and misdirection, manages to captivate the fleeting, opaque and unstable nature of dream itself – without, surprisingly, becoming annoying. An example: Rube’s daughter (and no, that’s not a SPOILER – it’s the first chapter…), isn’t with him, his initial conversation a lull, a phantom conjured forth by reality, more so than perception in general, being fluid.

Which brings me to a second and most important point concerning this novel: Lost in Dream is a gaming novel…and it isn’t. You know what they say, the old maxim, that authors should not play RPGs too much to avoid them and their rules creeping into the subject matter, limiting the perspective. (Exceptions to the rule exist – Clinton J. Boomer’s novels, for example – though even he deviates in his writing from RPG-y rules and utilize his own setting instead…)

This is and is not true I tend to agree with this notion, mainly due to my intense dislike for most novels, whether they’re published for the Forgotten realms, Pathfinder or any other such established setting. Most, not all, mind you. The dislike for this type of novel usually stems from two components: 1) If you’re writing for a game system, even implicitly, you’re expected to adhere to the system’s limitations and as such, e.g. Vancian casting and similar limitations need to be taken into account. 2) While such limitations make for great gaming, in most novels, they fail pretty hard to evoke a sense of tension that drives forth the plot. Similar observations can be made regarding creatures and characters. Ultimately, it is a “damned if you do, damned if you don’t”-Catch 22 situation….which brings this rambling excursion full circle.

If you’re familiar with the way in which the fluid reality of the realm of dreams is handled in game, you’ll also realize several important key factors. For one, the limitations, by virtue of the power of dreams, hopes etc. to shape reality and fuel the narrative, are less pronounced. Secondly, their singular focus and obsessions, in this book, Rube’s search for his daughter, becomes less a one-note character motivation and takes on another dimension, one that ultimately shapes the very journey from the shackles of the dread Denizens of Leng to the inevitable conclusion.

Beyond these, one should not be remiss to mention “Jax”, the blue-skinned fellow traveler that shakes Rube out of his initial contemplation. Where Rube is the straight man, Jax takes the role of the planes-wise mentor…and it is more often than not that his dialog made me smile: Beyond the scathing sarcasm employed by the good man, his utilization of time-honored insiders like the adored “berk” made me conjure up fond memories of Planescape and all the adventures embarked upon in that context.

The onomatopoeia utilized in the planar slang of Jax does its fair share to entertain the readers, while also cementing the basic feeling of uncanny estrangement (more in an Entfremdung-kind of way, if you’re familiar with the literary concept) that is also mirrored by his oscillation between high-brow sentence structures and less refined minor profanities, always creating a picture of someone not 100% used to thinking and speaking as we do…and hitting a stride regarding my own personal predilections.

Which also brings me, personally, to the biggest surprise regarding this novel: You see, gaming novels, particularly those straying deep into the weird and fantastical, tend to lose on one end of the spectrum: Either the threat falls apart and becomes unbelievable, as the heroes nuke the fridge (like Dresden Files’ Changes threw the whole premise of any balance or credible threat of…anything to Harry out…) while maintaining the high fantasy aspect. Or, personal, deeply human components take the upper hand and ultimately make you consider them respective protagonists unsympathetic by virtue of them not “getting their act together” when so much’s at stake. In a minor way, Rube does fall into the latter category in a minor way…but then again, it is his humanity, the theme of his obsession, his quest, which ultimately fuels the plot of Lost in Dream.

On a character-perspective, the respective protagonists are solid and do their job of serving as a means for identification well; the true value of this book, though, does lie in its absolutely exquisite and inspired world-building, which does render the overall experience of this book rather pleasant. Now, I do know how this sounds, when ultimately, it shouldn’t: This is not 2312’s plodding and detailed world-building and neither does it feature bland characters that are only tangentially there to justify the world-building: The protagonists very much remain crucial – once again, also thanks to the unique set-up and world provided. If the world is shaped by desires and dreams, one should expect the reality to adhere to them and their fictions – it is thus in a positive way, somewhat akin to Silent Hill 2’s narrative, that one can analyze components of the novel as to their respective actions regarding the protagonists…though here, discrepancies are not only existent, they make sense: After all, this is a collective narrative of a reality, not one tailor-made to punish one character.

If all of this sounds too high-brow of an analysis or too plodding, I should not be remiss to mention that this book’s overall plot pretty much is a tour-de-force, making this a page-turner, if you will: There is action galore and the pondering I embarked upon above do not represent the focus of the book – they are merely a product of it. It is very much possible to read this as a straight, fun and extremely creative action-laden narrative, should you choose to – though you’d miss out some of the more subtle components of the subtext.

On the formal side, the book comes with a pdf-version, a kindle-version and an epub-version; I used the former to read it and its bookmarks and one-column standard made it easy to read.

Ultimately, this novel is a great read, though one that made me wish it took a bit more time here and there, dived deeper into the psychological ramifications of dreaming and their effect on world, had sported a slight bit more subtle symbolism – but then again, I am a difficult audience to say the least. This book still can be considered an excellent read and a furious debut for author Matt Banach. My final verdict will clock in at 4.5 stars, rounded up to 5.

You can get this book (with a 30% discount!) in its electronic version here!

You can get the print version (same discount!) here!