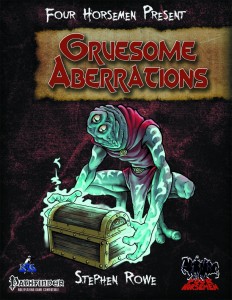 The first on the new Four Horsemen Present-pdfs clocks in at 13 pages, 1 page front cover, 1 page editorial/SRD, leaving us with 11 pages of content, so let’s take a look!

In case you’ve new to the concept of “gruesome” templates -in case you’ve missed the previous installments that featured the concept (for handy links to reviews and products, click on the “Gruesome-series” tab in this review on my homepage): Basically, we get a template as well as a sample creature, both of which deviate from what you usually get to see. First of all, the respective monsters do feature a shock value – particularly suitable for horror/dark fantasy scenarios, these values allow for a simulation of the unsettling effects these creatures can have on the heroes facing them. Beyond that, though, they quite simply tend to be designed in a thoroughly excellent manner that surpasses most creatures, at least in my book.

Why? Well, as you may have gleaned from my reviews, I tend to be a pretty brutal GM, but at the same time, years upon years of horror/dark fantasy games have instilled a desire in me and my players for them to be rewarded for being SMART. Not for being meta-gamey, but for being SMART. Gruesome templates tend to feature offensive/defensive capabilities that render the creatures brutal challenges…but they also feature a weakness the players and PCs can exploit to triumph…and better yet, the templates provide information to actually glean such weaknesses. This makes the series extremely rewarding for both GMs and players – GMs can see the fear in the PCs as they scramble for the hills; players get the satisfaction of seeing the lethal adversaries fall and be destroyed as they exploit their Achilles’ heel. I’m a huge fan of this type of design and so far, the supplements featuring the gruesome templates have been superb, to say the least.

The templates herein, after an explanation of the above-mentioned peculiarities, would be as follows: We begin with the CR+0 bound horror, which is tied in its life-force to a place, on object or a person, called the creature’s “charge” – they may possess said being and are practically immortal and may even rejuvenate from total destruction: However, via their charge, they can be influenced via their charge. This is pretty much a rendition of the classic “bound to darkness”-trope and the narrative potential is vast: Will the Pcs elect to kill innocent XYZ to stop the dread aberration? Can they escort the haunted charge back to a safe haven to get rid of the constantly respawning beast?

The CR+2 eternal template follows a similar vein: These creatures get MASSIVE defensive capabilities – from bonus feats to resistances and DR, these bastards are exceedingly hard to kill…and they auto-resurrect…only killed in a particular manner, which is unique for each eternal creature and which may be tied to creatures, artifacts, innocents, materials, etc. It is a cool take on the nigh-unstoppable nemesis that combines well with the prior one. That being said, both fill the same narrative niche.

The CR+2 fleshwarper creature can at-will modify its body to adapt to circumstances in both offense and defense. Additionally, a fleshwarper’s mere touch can instill painful, paralyzing deformity in a target and even twist the minds of the helpless to serve this nasty being – and yes, this pretty much would allow for a more versatile rendition of Resident Evil 4’s adversaries – just add parasites to the mix and there you go. The next template would be a mythic one – the Old One, who adds +1/2 tier to CR. Beyond massive boosts to intellect (minimum 20!!!), their very presence makes non-mythic creatures fall to the floor and grovel before the creature…and the effect may also be wiped from their minds! With triggered suggestion-instilling telepathy and options to ignore the laws of space, these guys are deadly…and yes, permanent confusion-inducing, spellcasting as a caster of their choice with levels equal to HD and yes, they are undying…but also, thankfully, apathetic, which may be the only reason why the PCs survive an encounter with such a magnificent adversary…

Editing and formatting are top-notch, I noticed no significant glitches. Layout adheres to a beautiful 2-column full-color standard and the pdf comes fully bookmarked for your convenience. The pdf sports 2 nice artworks.

Stephen Rowe’s aberrations deliver – each and every template herein has something serious going on for it and does feature some mechanically interesting tricks. At the same time, I do feel like there could have been slightly less conceptual overlap between the templates – we get 3 variations of the immortal nemesis-beast herein, which, while all different in focus and execution, ultimately serve similar purposes on a meta-level, though at vastly diverging power-levels. Ultimately, this remains my only viable gripe and hence, my final verdict will clock in at 4.5 stars, rounded up for the purpose of this platform.

You can get this damn cool collection of templates here on OBS and here on d20pfsrd.com’s shop!
Endzeitgeist out.