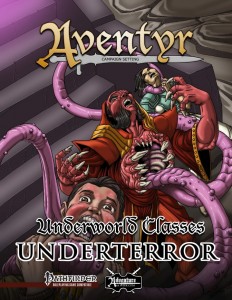 This installment of the Underworld Classes-series clocks in at 16 pages, 1 page front cover, 1 page editorial, 1 page ToC, 1 page SRD, 1 page back cover, leaving us with 11 pages of content, so let’s take a look!

What is the underterror? Well, it is a tradition mostly practiced by the dread Gitwerc, the tyrannical dwarves of AAW Games’ underworld and crunch-wise, a 20-level base class. The underterror receives d10, 2+Int skills per level, proficiency with simple weapons, axes, hammers and picks as well as light and medium armor and shields (excluding tower shields). They also receive 3/4 BAB-progression and good Ref- and Will-saves. At first level, they receive darkvision 60 ft, which increases by +10 ft every odd level for a non-standard maximum of 160 ft. at 19th level.

At 1st level, underterrors may alter self at will without gaining any abilities as a supernatural ability. But that’s not what this class is about – the underterror receives an evolution pool equal to 3 points at first level, scaling up to 22 at 20th level. These evolutions (taken from the eidolon’s array) become the main fodder of the class. While an underterror must be biped, he does not receive the bonuses an eidolon usually receives from said base form, though they may select them. Evolution points may be redistributed each level. Some evolutions are completely prohibited for the underterror, whereas others are delayed and receive a new minimum level to take them. Starting at 3rd level, underterrors may switch 1 evolution point 1/week via a 1-hour ceremony, with 8th, 13th and 18th level increasing the evolution point cap for the switch by a further +1, but also extending the required time by that amount in hours.

Now here is the thing – underterrors may not hit as reliable as other classes, but the evolutions allow for a significant array of extra attacks – one thankfully capped by level-progression. Now if you’re like me and shuddered at the required penalty/etc.-list, be assured that the pdf thankfully devotes a whole page listing tables and explaining the interaction of natural attacks – which would be even more useful, if the second column more clearly stated what sets it apart from the first column. Still, pretty helpful. At 5th level, they may evolution surge 1/day, +1/day every five levels thereafter.

At 6th level, underterrors may grant their evolutions to willing and unwilling recipients 1/day for 1 minute per class level, expanding the potency and duration later at 16th level. As swift actions, they may become dreadful creatures indeed, causing a debuff + shaken effect and further increase the potency of said ability at the expense of rounds available per day. Extra Evolution as a bonus feat is also gained.

At the highest levels, underterrors become immune to an array of polymorph effects and, as a capstone, they become an outsider that has attacks not only count as adamantine, it also allows for a 1/day swift activation of HEL Powers.

Now speaking of which – if you like HEL powers as a concept, the Savant of HEL-archetype receives a significantly increased array of HEL Powers alongside expanded lists to choose them from, but at the cost of never becoming huge and losing all extra attacks the base class may milk out of evolutions. Their HEL Power use is also expanded and rendered more efficient and they may even apply select, chosen metamagic feats to HEL powers. High level savants may also reroll saves and force rerolls upon adversaries.

The pdf also sports two new feats, one for extra HEL powers and one for an increased HEL pool.

Editing and formatting are okay -the glitch in the explanatory table is a bit unpleasant and here and there, the abilities could have been a bit more concise in their explanation/presentation, but that is a minor issue. Layout adheres to AAW Games’ beautiful two-column full-color standard and the pdf sports *A LOT* of gorgeous full color art. The pdf also comes with pretty rudimentary bookmarks – not enough to make the pdf truly comfortable to use.

Mike Myler and Julian Neale deliver a class that is not for the faint of heart – both in-game and regarding the work it takes to get these guys off the ground. The class utilizes evolutions and ll the nasty eidolon tricks and focuses on massive attack accumulation, with the general focus being completely different from Rite Publishing’s superb Masquerade Reveler: Unlike RiP’s class, this one focuses on a less fluid take on the concept, instead opting for a more continuous output. Make no mistake, this is an advanced class that requires some serious thought, with flexibility being mostly based around the scarce few HEL points and the option to switch out evolutions in lengthy processes. So from that point of view, the underterror is less flexible. On another note, though, it excels – once you’ve made your build, you’re pretty much done and can easily play a terrible, horrible monster in ANY module.

The constant, unlimited option to alter self makes underterrors functional in just about any context – even urban adventuring. And yes, the look on the face of some NPCs will be priceless, as the underterror unleashes his might. Alas, it also makes dipping into the class ridiculously strong. Darkvision, infinite alter self, evolutions – all for one level? Where do I sign? Especially any stealth-based/agent-class would reap immense benefits from this class – a level-based lock on the amount of alternate forms known would help mitigate this ultimate chameleon-dip. Apart from that, slightly more (and less ambiguous) guidance for players may have made this very complex class more user-friendly.

Is the underterror a bad class? No, not by any means! But it is one that needs to be handled carefully and maturely by both players and the DM and it needs experienced hands to prosper. In the end, it is a unique class to play, with minor rough edges. All in all, I will settle for a final verdict of 3.5 stars, rounded up to 4 for the purpose of this platform.

You can get this mutating menace here on OBS!
Endzeitgeist out.