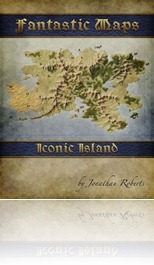 This installment of the Fantastic Maps-series by Jonathan Roberts is rather different from the other installments of the series in that it does not come as a pdf and depicts another type of map:

Whereas the series usually depicts some area with grids to use as combat/environment maps in the small scale, this instead takes one massive island as you’d depict it on a detailed treasure map from a bird’s eye’s view and provides an overview of an island.

Beyond the high-res jpeg of the island per se, we also get one version with icons. Icons? Yes, 16 .png icons are part of the deal: The brown icons range from anchor, axes, caves, 2 city-icons, 2 keep-icons, a ruin, a flag, a serpent, a skull, a sword, a wreck and icons for temples, towns and villages.

These icons are present on the 3 alternate versions of the high-res jpegs of the island – there is one sans any grid with the icons, one that also sports hexes in addition to the icons and a b/w-version of the map with the hexes and icons.

The map provided by Jonathan Roberts depicts a beautiful island rife for the population by the DM, be it with or without icons. In any exploration/nautical context, this map should come handy, whether it is for skull & shackles, razor coast or journeys to the west – this place should be interesting for you. However, I also have something to complain about: What if the Dm wants to print out the map of the island, treasure map-style (you know, glue it together, give it the coffee-treatment, go all the way), there is no way to do that. In contrast to other Fantastic Maps-installments, there is no blown up version of the map. While I get how that is usually intended for use with miniatures, I think a hex-studded version of the map, blown up (perhaps so its entirety spans 4-8 pages) and made into a massive, real treasure map would have greatly expanded the usefulness of the installment. Due to the lack of said feature, I’ll only settle for a final verdict of 4 stars for this installment.