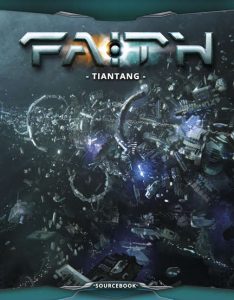 The first expansion sourcebook for the inspired FAITH game/setting clocks in at 99 pages once you disregard editorial/ToC, etc. The hardcover version contains a cool fold-out poster drawn by Hans Jenssen, which depicts a ghyro-zhan and a zero-G slum from an isometric perspective – a cross-section of sorts. I will get back to this per se neat handout later.

This review was moved up in my reviewing-queue due to me receiving a print copy of the book. I do not own the electronic version, so this review is based on the hardcover.

Now, the first thing you’ll note, is that the book is beautiful – much like the massive FAITH campaign setting, we get gorgeous artworks in a consistent style, with even nameless NPCs and items getting their own artworks.

4 such items are provided, featuring two suits and two drones. 9 nameless NPC statblocks are included in the deal, and the named NPCs littered throughout the book are not included here – a handy index at the back notes the respective page numbers where these stats are found for your convenience.

Much like FAITH’s core book, we begin once more with an immersive and well-written piece of in-character prose, before we actually get to Tiantang, which is probably the default starting point for most FAITH games.

Tiantang is a gigantic Dyson Ring – unbelievably, monstrously, large, a metropolis eclipsing multiple planets in size, with the greatest population density ever recorded. This sense of claustrophobia is also evoked by the introductory text. The pdf defines economic and social rank in 5 steps from lowest to highest, and explains the general structure of Tiantang. The vast majority of people live in Zero-G habitats in basically squalor; even commuting can be hellishly dangerous, and with starships etc. being used as habitats, Tiantang is constantly mutating and growing like a ginormous civilization-tumor. Still, this is not all: The so-called gyro-zhans maintain an artificial gravity by spinning immensely fast, resulting in “up” being towards the center. It is in such places that the middle-class lives in (relative) luxury compared to the vast sprawl of impoverished and skulling workforces. There also are palace-ships for the super-rich, and an algae-variety generates most food and bio-energy required by the vast metropolis. Tiantang is roughly split up into 11 sectors: While CS, the administrative hub and corporate neutral ground is usually not counted among those sectors, it is, in practice and presentation, one. Every sector is subdivided into hundreds of districts under the jurisdiction of businesses – whether legal or illicit is, as far as the Corvo are concerned, a matter of formality. Trading between sectors is costly and discouraged by corporate accord.

Now, the last page of the book notes the cost of ambulance service, military aid, remote hacking, etc., and in structure, the book’s first 78 pages are devoted to depicting Tiantang in much the same way as the campaign setting covered its ground. 4 of these are devoted to two-page spreads of the isometric hand-out maps with some supplemental notes, but both fail to specify any scale. This is, just fyi, symptomatic for the book.

That is to say, we move from sector to sector, are introduced to special places/organizations that hold power there, get a couple of adventure hooks to further development, and some NPC stats for movers and shakers. As the massive space station is the capital of the Corvosphere, we also learn about the Megacorp sectors and about some of their plans. Leitmotifs most assuredly would be the conflict between abject poverty and appalling luxury, and the adventure hooks employ a diversity of different angles, most of which deal with the realities of middle class plus, so not much information regarding slumming and the like.

Regarding adventure hooks, we can see a variety of unique and yes, inspiring ideas: We have a corvo-equivalent of Tesla slowly gaining traction; notes on Iz’kal infiltrators and spies and how they may have saved both Corvo and Iz’kal from annihilation at the ravagers hands. We learn about the struggle regarding the Medhi gate to the Labyrinth, about a possible conspiracy pertaining the ability to map the labyrinth…there are a TON, and I mean, a TON of cool angles. Heck, we even learn about one superstar of Corvo-music, about the criminal Tongs and how they interact, about how the megacorp districts diverge from one another and what the focuses are…the world-building is amazing and oozes flavor, and the hooks, as a whole, tend to gravitate towards being inspiring. That being said, Romeo & Juliet/Westside Story-like angles show up a bit too often for my tastes.

…and here is the issue with this book. As much as I enjoyed *reading* this book, as much as I liked the prose and world-building, as a gaming supplement, Tiantang, as prevent here, is a failure. I have no idea how pretty much anything works. Sector to sector travel and controls, daily life, size of the sectors – the book is opaque regarding these factors in a way that left me flabbergasted. I kinda know how small, isolated aspects of Tiantang should *feel*, I get the broad strokes, but after reading this book twice, I am 100% sure that I’d have to improvise pretty much every single detail that’s relevant.

This is not a functional sourcebook.

I have no idea how the corps act and how the hierarchy works. I have no idea how life works, how travel works, how traffic works in this super-dense metropolis…I know that commuting ships are lost mysteriously, I have an adventure angle that is really cool…but I have NO IDEA how the system usually works. This is not me picking out blind spots, mind you – this exasperating vagueness extends to pretty much every aspect of the massive metropolis. The defining crowdedness evoked in the beginning? It’s almost immediately lost, never to have any influence or context.

I’m going to return to this issue below, in the conclusion. The last pages of the book are devoted to a sample adventure. It’s the single worst sample adventure I could have imagined. First of all, it’s a basic who-dunnit mystery that doesn’t exactly make use of anything that’s Tiantang specific. It’s so super-generic, it is almost painful. You can file off the serial numbers and play this in pretty much any other game, any other metropolitan setting. Yes. That generic. Worse, the motivation for the PC’s adversary is that his protégé/love-interest was, no joke, that’s in the book: “raped to death.” (pg 93) And the PCs are expected to stop the guy due to his less than discreet murder spree versus rapists and killers. The adventure is not just structurally bland and generic, failing to capitalize on the unique environment (which, by virtue of its opaque nature, makes it actually HARDER to run in Tiantang…) it also throws a girl in a fridge at us. F*** this adventure. It wastes page-count the book desperately needed.

Editing and formatting are okay – the prose oscillates from not particularly inspired staccato to vivid, flowery descriptions. I noticed a couple of glitches, including sentence fragments missing, which stood out particularly here. Layout adheres to FAITH’s two-column full-color standard and the artworks are amazing. The hardcover is, production quality/paper-wise, a neat tome. I can’t comment on electronic features.

I don’t get it: Carlos Gómez Quintana, Mauricio Gómez Alonso, Helio del Grado and J.C. Alvarez have also worked on the core book – and that one is amazing. Tiantang, on the other hand, buckles under the lack of space it has to develop its amazing setting, crumbles. It’s not supposed to be just an introduction – it’s supposed to give you a good idea of the default starting region, and as much as I desperately want to, I can’t picture this place and how it’s supposed to work and feel.

You see, this huge thing is opaque in the worst way: It dangles a great setting in front of your nose, but once you try actually using it, you’ll realize that you’ve been blinded by the dazzling, broad strokes this is painted in. That works for a big campaign setting like the core book, sure. It doesn’t work for a concrete adventure locale/setting supplement. At all.

This is all style, no substance.

And it’s not (just) the page-count: While it would have been a challenge to depict Tiantang in 100 pages, it’s not an impossible feat: With structure and actually in-game relevant information instead of iterations and flowery prose on the class differences, it would have been possible. For an exhaustive description, we’d require probably at least 300 pages. The book wastes, time and again, space on adventure notes and details, highlighting a small section in meticulous detail – but, much like zero-G slums, these tidbits float around in vast emptiness; they don’t connect, they have no context for their details. It’s sure nice to learn about some Corvo-stars and music, but we lack and context to make them and their cultural impact matter.

Add to that the insultingly bland adventure, and we, alas, have a deep fall from grace here. And don’t get me wrong, I totally get *why* the adventure is so painfully bland and tries to paint over that with shock-value that wasn’t earned. How can you write a module for a setting that provides hyper-detailed tidbits in a vast, empty room?

If you want to read this for the sake of reading, then consider this a recommendation – it is, in spite of being slightly less refined or inspired in its prose than the campaign setting, a worthwhile reading experience.

HOWEVER. This is a gaming supplement. I’m supposed to rate it as such. And in this category, this is, alas, in spite of being full with great ideas, a failure. My final verdict will be 2 stars, due to the neat ideas and hooks, but as a supplement, this doesn’t work.

You can find the pdf of this book here on OBS!

You can get this in print here on Burning games’ shop.