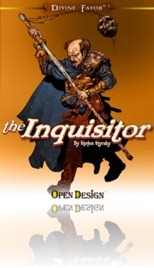 This part of the divine favor series from Open Design is 20 pages long, 1 page front cover, 1 page editorial/ToC and 1 page SRD, leaving 17 pages of content for the Inquisitor, so let’s check out what we get, shall we?

The Divine Favor series has been hit and miss for me, so let’s take a look into which category this one falls.

The pdf begins by introducing a new ability, the so-called censure, which brings the wrath of an inquisitor’s deity down on the sinners by utilizing a kind of minor curse that uses the judgment ability. 11 different censures are presented and none of them felt overpowered or unbalanced and since they use the judgment ability, the added versatility does not impede balance. I would have loved a suggestion on inquisitor’s learning them à la in SGG’s book on new judgments, though.

The second new class ability does replace a feature of the Inquisitor and a relatively powerful one at that: Condemnations take the place of solo tactics at third level. Starting with a selection of 5 at 3rd level, they are expanded on 6th by adding 6 more to choose from and again 5 at 9th and 12th level, resulting in a total of 21 condemnations to choose from. Essentially, they are touch attack-delivered curses that impose negative conditions from fatigued til turning to stone/paralyze.

Want more inquisitions? Divine Favor delivers by providing 11 new inquisitions with two powers each. It’s fascinating, really. The abilities per se are interesting, but it’s this one tiny little sentence of fluff at the beginning of each inquisition’s entry that makes me want to play an inquisitor utilizing them.

Of course, no crunch-heavy class-book for PFRPG nowadays would be complete without new archetype: The Ghost Hunter is a slayer of the incorporeal that makes calling for an inquisitor finally make sense: They may disperse ghosts and apparition and with the new spell final rest, they can end the threat of even rejuvenating foes.

The hand of god, a rather complex archetype, gets 8+Int skills and is a kind of covert ops unarmed secret agent of his church who is especially adept at infiltrating hostile territory, whether it is a cult or a nation of infidels.

The Penitient is an ex-inquisitor who has forsaken his fanaticism for forgiveness. What a wimp! 😉 Just kidding – great idea to keep a character in play!

If the Hand of God is the secret agent of a church, then the stalking shadow is the assassin – replacing bane and greater bane with sneak attack, he makes for a deadly foe. However, I don’t get why his sneak attack is called killing blow – I always think of the assassin when reading that… The sworn foe is a rather simple (and boring) archetype that gets the rangers favored enemy. Next! The Witch Hunter archetype gets a cool feature that lets him be the bane of all spellcasters by getting a modified version that surpasses improved counterspell. Personally, I prefer the SGG-class, but to each his own. The archetype works.

The 8 spells belong to the imaginative, useful and iconic kind: From aforementioned final rest to end the threat of rejuvenating undead to “Nail Foot”, which lets you drive a nail into a foot print to slow down the person to which it belonged like a caltrop and mechanically interesting spells that let you lend condemnations to others, the spells are all killer, no filler.

The pdf closes with 3 feats, one granting you an extra condemnation, one an additional kind of condemnation and one letting you transfer it via melee attacks.

Editing and formatting are top-notch, I didn’t notice any glitches. Layout adheres to the two-column standard and used parchment-look of the series. The artworks are stock with the exception of the cover. The mechanics introduced in this book add whole new dimensions to the inquisitor and I really like the iconic new abilities, spells and condemnations and censures. However, the archetypes somewhat felt not that exciting to me. Yeah, they are not bad. In fact, they are pretty good. But they didn’t truly stun me with their imaginative potential and some felt like filler. None do something new, all revisit some tropes that have been done to death via PrCs, archetypes or even full classes. In the end, I liked this pdf, though the oracle-one felt superior by a margin. My final verdict will thus be 4 stars.

Divine Favor: The Inquisitor is available from: