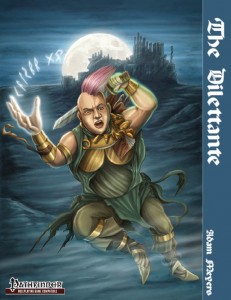 Rules-wise, this new base-class gets d8, 6+Int skills per level, 3/4 BAB-progression, good ref-saves, spellcasting starting with 2 spells and getting up to 22 at 20th level, spells up to 6th level. The Dilettante casts via int, but may choose spells from the wiz/sor, cle/orc or druid-lists, but they cast these limited spells in a rather unique manner: Via so-called aura points – dilettantes get class level + Int-mod aura points and must spend spell-level aura points to cast a spell they know and with regards to metamagic, they count as spontaneous casters and may not exceed the maximum level they can cast via metamagic. I assume a dilettante has to spend aura points equal to the metamgaic modified spell level and not the base level, though the pdf does not explicitly state this. Dilettantes also get proficiency with light armors and shields, simple and martial weapons and incur regular arcane spell failure-chances.

Aforementioned aura points can also be used as a free action to get a circumstance bonus to atk, damage roll, CMB or saves equal to int-mod or to get a bonus to skill checks equal to 1/2 class level as a part of the skill check.  At 3rd level, dilettantes may also spend an aura point to get int-mod as dodge-bonus versus a single opponent for one round.

A total of 27 so-called dalliances (chosen at 2nd level and every 2 levels after that), i.e. talents, allow you to customize your wildering in other class toolkits: Alchemist discoveries, bombs, trapfinding, uncanny dodge, improved healing, countersong/distraction, familiars, firearm training, grit, witch hexes, poison use, sneak attack  and so on – there are a lot of things to wilder from, and some of the dalliances allow for the Int-modifier to be used in place of Int, Cha or Dex/Str-based skills when using them. By the way – not all of these work as you’re accustomed to: Sneak Attack, for example, requires the additional expenditure of an aura point.

Channel Energy is also special – at 5th level, this ability is added to the Dilettante’s arsenal and it is not available via regular dalliances. Starting at 10th level, Dilettantes may use all types of skills untrained and at 16th consider all skills class skills. Also starting 10th level, the class may opt to choose major dalliances instead of regular dalliances: a total of 14 additional major dalliances are provided. Gaining e.g. access to the Rumormonger advanced rogue talent, further pushing healing capacity (and not incurring AoOs), gaining improved evasion etc. – though there also are some unique ones here, like for example the option to spend additional aura points to change half of the spell-damage into holy/unholy damage or moving up to your movement rate as an immediate action for 2 aura points.

Starting at 11th level, dilettantes may also spend 4 action points once per round as a free action to get an additional standard action and at 13th level, cha- and wis-mod further enhance the array of aura points available per day. 7 different Grand Dalliances (instead of dalliances or major dalliances) allow dilettantes to further go down one path at 18th level. The two high level abilities net more dalliances or feats and +1 to all attributes.

After that, we get two new feats to get more dalliances or aura points. Dilettantes and their place in the world are also mentioned and balancing advice with regards to magi, barbarians and summoners is given. The pdf also features sample characters (great for DMs) – a human at level 1, at level 7 and level 12 and the same level-range is also covered for a gnomish, an elven or half-orc dilettantes.

Editing and formatting are very good, I didn’t notice any significant glitches. Layout adheres to a 2-column parchment-style standard that features several beautiful full-color artworks and the pdf also comes with a printer-friendly, second version sans background. Both pdfs come with extensive hyperlinks – though unfortunately, e.g. not every instance of the word “knowledge” showing up should be hyperlinked to knowledge skill-checks – that sort of automated hyperlinking hurts more than it helps. The pdfs both have no bookmarks, which is imho a major downside.

Well…the Dilettante. A jack-of-all-trades-class and one that has some rather interesting, versatile options at its disposal. While it does not wilder in every class’ toolkit, it does offer a variety of different options to cobble together a unique playing experience. While you’re out of luck if looking for ki pools, magi abilities or abilities of inquisitors and paladins, personally, I really like that these divine/very specialized abilities are left out. The issue of MAD (multiple attribute dependency) is somewhat counteracted by the dalliances that allow the int-modifier to replace some of the other  attribute-dependent abilities.

The general direction of the class abilities is nice, though honestly, the dilettante left me feeling a sense of lack – and it took some time to realize why. Classes in PFRPG, unlike their 3.5-equivalents , are defined by more than one ability and the dilettante simply can’t cover them all. Which per se is fine, especially since the class does gain some unique tricks that blend the different disciplines – though not particularly many. It is these dalliances that shine the brightest and are mechanically the most interesting and honestly, I would have enjoyed seeing more of them.

In the end, the class offers a solid take on the jack of all trades class – the relative scarcity of aura points serving as a nice balancing mechanism, though the class could have imho used slightly more of them – the class gets superb versatility, yes, but even if it tries, it can’t really stand up to one of the “professional” specialist classes. The balancing thus probably is just as it should be…and yet. I think that with some additional dalliances (bardic bombs?) the pdf could be even better. Combined with the lack of bookmarks, I feel justified in rating this as a good, though not a stellar class – hence my final verdict will clock in at a solid 4 stars.

You can dabble in this class here on OBS and here on d20pfsrd.com’s shop!