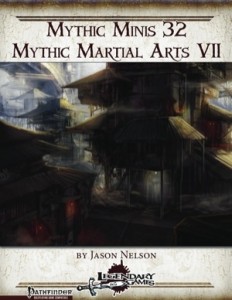 -Dispelling Fist: cast dispel spells and bigger brothers of said spells when hitting foes with an unarmed attack; alternatively, spontaneously convert a spell into dispel or its big brothers (provided you know them) when attacking by using a swift action. Personally, I think this should cost mythic power, but it’s mythic adventures here and your game may not be this restrictive.

-Unblinking Flame Fist: +1/2 mythic tier on crit confirmation rolls with stunning fists, roll twice versus e.g. effects like fortification; Additionally, use immediate action to feint versus AOOs you provoke when charging. On a success, the target receives a penalty equal to 1/2 your tier. Nice one!

-Unfolding Wind Rush: Move 1/2 speed + full attack with thrown weapons without sacrificing the highest BAB-attack. If you use mythic power, you may instead move full movement and execute the attack or lose the highest BAB-attack and move twice your movement rate. As if that wasn’t cool enough, for 1 ki, leave a wind wall in your wake. Glorious, inspired, smart and versatile – two thumbs up!

-Unfolding Wind Strike: +1/2 mythic tier to crit-confirmation rolls with thrown weapons, roll twice against miss chances; spend 1ki to add seeking or returning special weapon ability to thrown weapons – and use the latter to either imbue one weapon for some time or multiple ones for 1 round. Once again, glorious – though this is a “clone” of Unblinking Fist, it is thoroughly different in all key components – that’s how it’s done!

Jason Nelson delivers in this neat installment of mythic minis – more so than in the pdf on the elemental styles, the ones herein go one step beyond – while thematically linked and similar in the structure of the benefits they grant, their actual benefits are thoroughly distinct, mirroring perfectly the concept underlying these feats – built on the same style, vastly different results.

A truly nice installment of the mythic minis-series, well worth a final verdict of 5 stars + seal of approval.

You can get this cool mythic mini here on OBS!
Endzeitgeist out.