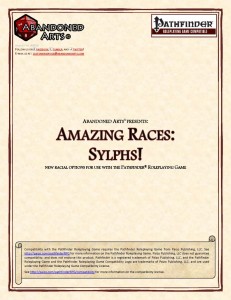 This installment of the Amazing Races-series, as always, is 4 pages long, 1 page front cover, 1 page SRD, 2 pages of content, so let’s take a look!

Much like the Oread before them, the Sylphs have been so far left most untapped and this pdf seeks to add some unique flavor to the race, so what do we get?

Well, we kick off with 4 new feats:

-Cloud Gulp: Negate mists/breath weapons, but be affected by them in spite of immunities. VERY cool one, since there to my knowledge does not exist a similar means of canceling these effects.

-Thundering Rage: Deal sonic damage when using elemental rage and if you have Storm in the Blood as a racial trait, you can deal 1d6 electricity damage to yourself as a swift action. Per se cool, but VERY specific.

The two character traits allow you to hold your breath Con x 4 rounds or get +1 to atk and damage after aiding an ally for AC or atk. Nothing special going on here.

There also is a new archetype for the Paladin-class, the Skyguard – an uncommon choice for sure. Themed around the concept of liberation and air – and as such, the basic ability of the archetype is cool in concept – instead of smite evil, the Skyguard may use winds to deal damage at a creature within 30 ft., dealing 1d4 slashing damage per class level the paladin possesses 1/day per paladin level- Per se a cool idea – but a crippled one – the increase in uses per day when compared to smite is bought with no significant bonus to hit as well as a problematic, very limited range that renders the ability essentially almost useless – especially at higher levels, since it does not allow for iterative attacks. Gaining minor AC-bonuses and DR also make for a very weak trade in for divine grace. Gaining elemental channel (air) and 1/day freedom of movement don’t change these weak payoffs, nor do the high level abilities, which remain weak and not particularly exciting.

Editing and formatting are very good, I didn’t notice any significant glitches. Layout adheres to Abandoned Art’s 2-column no-frills standard and the pdf has no bookmarks, but needs none at this length.

I applaud the approach taken with the Sylph – a race is imho very much defined by culture and unique tricks to pull off and this pdf seeks to introduce some – but ultimately falls short of its own concepts – where the first feat does something interesting, the latter ones as well as the racial traits and alternate racial traits fall slightly flat and remain, concept-wise, while not bad, also not particularly exciting.

And then there’s the archetype, which, even for my VERY conservative tastes, is simply weak. It is not often I complain about something being UNDERpowered, but this is one definite case of this being the case. The concept of the archetype is great, but its execution is woefully lackluster and especially compared with other archetypes we’ve seen from author Daron Woodson, rather uninspired. All in all, one of the weakest installments in the series I’ve seen so far and with the lack of truly intriguing material, my final verdict will hence clock in at 2.5 stars, rounded down to 2 for the purpose of this platform.