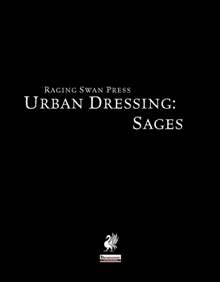 This installment of the Urban Dressing-series is 11 pages long, 1 page front cover, 1 page advertisement, 1 page editorial/ToC, 1 page SRD and 1 page back cover, leaving us with 6 pages of content, so let’s take a look, shall we?

The supplement wastes no time (or space) and provides us first a list of 50 entries that cover the general look of a sage’s domain: Small shrines, winking fiancés, strangely old back doors, trees decorated with ornaments containing scribblings of an ancient language – a solid table, though one lacking in something truly weird.

The interior of the respective places are also covered: From neatly organized scrolls, to steins and desks bolted to the floor, we have quite an array of different dressings to lend an air of mystique alongside a sense of normalcy to the respective locales. A d20 table of whispers and rumors further enhances your options regarding the sage in question – from being actually of another race to bitter disputes with rival sages or being a poet operating under a nom de plume – some solid ideas here.

There also are 20 rather complex hooks and complications regarding sages: What if the local sage ahs recently passed away and now agents from all around the world are on the hunt for said sages’ maps and notes – they might lead to long-forgotten treasures/nations/sites. Extremely awesome, since it takes the peculiarity of the installment into account, would be a short d6-table to check whether a given sage is actually available – perhaps the guy is not waiting for PCs to come around and earn a living! Two thumbs up – its small tables like this dealing with the unique topic that make dressing-files so much more useful!

We conclude this supplement with 10 short fluff-only entries (including hooks, mannerisms etc.) of sample sages, partially experts, partially PC-classes, all versatile. Nice to see here is that the evil sages among them actually are not gibbering psychos, but people with severe character flaws – two thumbs up for that! All too often, CE in a statblock means totally bonkers, while here, the character in question is actually fully functional.

Editing and formatting are top-notch, I didn’t notice any glitches. Layout adheres to Raging Swan Press’ elegant b/w-two-column standard and the pdf comes fully bookmarked for your convenience and in two versions – one optimized for screen-use and one to be printed out. The thematically-fitting b/w-artworks fit the theme.

Brian Fitzpatrick’s take on Sages at first didn’t wow me – the tables depicting the outside of the respective shops are nice, yes, but not too exciting. Then, the pdf turned things up a notch and actually gets rather cool. Now I’m biased here: Scholars are vain and eccentric and have esoteric interests – so where are the ticks, the obsession/specialty of the respective sages? Where is the table that tells you that a sage is particularly interested in the nature-magic-channeling capabilities of the honeybee? Or perhaps the scholar is particularly invested in the discussion of whether global imprisonment-spells cast on all evildoers would end the threat of the abyss and the moral implications of such actions? Perhaps s/he is particularly obsessed with a certain poet/genre/occurrence? Perhaps he only writes with giant eagle quills? So much potential, none realized – a table of actual preferred pursuits for the sages would have made this so much more awesome and could also be used to indirectly characterize the sage in combination with the exterior/interior tables – as written, the titular sages are rather scarce in the pdf. This dressing-pdf works superb in crafting the surrounding of the sage, but the personal touch the pdf would require for indirect characterization is curiously absent.

Which is a pity, for this pdf is very close to being actually superb in what it tries to do and misses the mark by a margin. In the end, this dressing is anything but bad, but also fails to be truly excellent and feels a bit lacking. Hence, my final verdict will clock in at a final verdict of 3.5 stars, rounded down to 3 for the purpose of this platform.