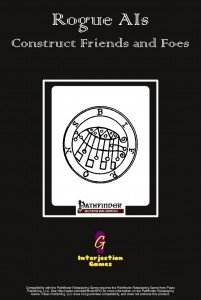 This pdf is 9 pages long, 1 page front cover, 1 page SRD, leaving us with 7 pages of content, so let’s take a look, shall we?

And we kick off with a rather cool and extensive background story – Copper Carl and the Mithril Men were once commissioned as a band/roadies to accompany one particularly greedy gnomish bard – upon his death, his avaricious, spiteful testament has been rejected by the law, resulting in the intelligent constructs becoming free. Ever since, the brass band – quite literally, has been entertaining the masses as a weird group of entertainers and champions for downtrodden constructs. Both Copper Carl and the Mithril Men are CR 4.

After these weird creatures, we are introduced to Flint and Tinder (both Cr 6) – the two constructs were created as bodyguards for one wizard named Aurelia an when their mistress was murdered, they have refused to yield to new owners, going mercenary to earn enough money to resurrect their mistress and get vengeance versus the nebulous assailants that vanquished their former mistress. Flint also has some VERY cool signature abilities – with metal resulting in fire damage for attackers and missed attacks resulting in plumes of flame as well, whereas Tinder may extinguish fires, be set ablaze and fire off thorns. A VERY cool due that could make for a cool weird buddy cop-vibe – or just fearsome foes…

The Maker is a CR 3 creature, a sphere set to fabricate whatever its now deceased creator desired, is a sphere with 6 arms currently fabricating obsessively daggers – from anything and every metal it can get a hold of.  Uncommon and a potential adversary/escort creature to recruit, yet another cool construct with multiple bleed-inducing abilities and massive crafting prowess.

The final duo is creepy indeed – Renee Corithas is a small undead girl, preserved mere hours after death and fitted with a metal prosthetic arm, she may be gruesome and the result of a guild’s failure and lax safety regulations. Renee, contrary to her appearance, is not evil, by the way and neither is the intelligent, welding torch wielding bodyguard-construct bodyguard Mr. Fixit, which may or may not be inhabited by the spirit of one of her relatives.

Editing and formatting re top-notch, I didn’t notice any glitches. Layout adheres to a two-column, b/w-standard with fitting stock art. The pdf has no bookmarks, but needs none at this length.

I’m impressed – uncommon, weird NPCs, each and every one of which comes with one or more unique signature abilities, this pdf is essentially all killer, no filler, offering massive background information on the cool constructs herein. This is one of the best mini-NPC-collections with a great array of creatures that have VERY cool signature abilities, stories and hooks – for a fair price indeed. I’ve seldom seen so many weird, cool creatures in a short pdf – these constructs are strange and unique in their ideas. I nevertheless maintain that this pdf should make for a great addition to the NPC-roster of any DM – and as such, I award a final verdict of 5 stars + seal of approval – congratulations to author Bradley Crouch!

You can get these cool construct-NPCs here on OBS and here on d20pfsrd.com’s store!