AL 5: Stars in the Darkness 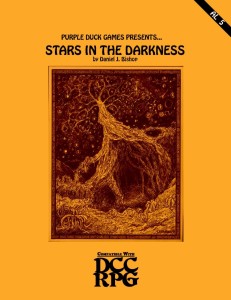 The fifth module/adventure location for the Dungeon Crawl Classics-system, now released by Purple Duck Games and penned by Daniel J. Bishop, is 38 pages long, 1 page front cover, 2 pages SRD, 1/2 a page advertisement, leaving us with 34 1/2 pages of content, so let’s take a look!

This being a review of an adventure-sandbox-locale, this review contains SPOILERS. Potential players will wish to jump to the conclusion.

All right, still here? The world is suffering – the pdf kicks off with a list of 30 different entries that align a lucky star to each birth augur – why? Because the skies are in turmoil. One by one, the lucky stars are vanishing from the skies – and the PC’s luck is starting to suffer. In order to reclaim their luck, the PCs will have to undertake a journey into a conceptual  space – think rabbit-hole, the transcendent journey throughout space and time into a space below the celestial tree, where a complex at the juncture of places and times not only holds the dread secret behind the disappearance of stars.

As the PCs may find out via visions and interactions, there once was a race of progenitors for elves, tasked with guarding and shepherding the stars – these winged beings have since degenerated, via the fell influence of a dread being as well as a vile drug – fully statted, of course. The PCs will have to combat the massive opposition awaiting them. Thankfully, they will have some support via a second, fully statted party that doubles as replacement characters – heroes from another world and time of the Praexi race – weird and alien, yet coincidentally speaking the same languages.

In order to truly liberate the stars that are being consumed, the PCs will have to brave bridges of the infinity of stars and defeat an indestructible dwarven incarnation of the true culprit – essentially a sentient black hole, complete with directional gravity that makes for one of the coolest show-downs I’ve seen in quite a while. The pdf also features full maps of the dungeon, both for GMs and player-friendly versions of the maps.

Editing and formatting are top-notch, I didn’t notice any glitches. Layout adheres to an elegant, printer-friendly 2-column b/w-standard with plenty of original pieces of b/w-artwork, with especially the depictions of the iconic locales being awesome and not something I expected in this product. The pdf unfortunately lacks bookmarks, which is imho a mayor comfort-detriment at this length.

Daniel J. Bishop has once again created a glorious supplement with iconic, weird and awesome foes, brimming with imaginative imagery – and were it not for the missing bookmarks, I’d immediately settle for a final verdict of 5 stars + seal of approval. Due to the lack of bookmarks, though, I’ll omit my seal of approval and still recommend this wholeheartedly also for DMs of other systems, if only for idea-scavenging.

Get this neat module here on OBS or here on d20pfsrd.com’s store!