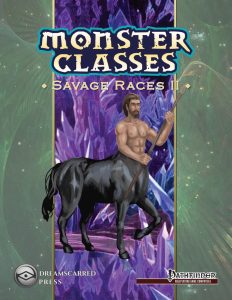 This installment of Dreamscarred Press’ Monster Classes-series clocks in at 9 pages, 1 page front cover, 1 page editorial, 1 page SRD, leaving us with 6 pages of content, so let’s take a look!

The pdf begins with the centaur, who gets +2 Str and Con, is a monstrous humanoid with a base speed of 30 ft., darkvision 60 ft and quadruped. Their 4-level monster class gets d10 HD, 4+Int skills per level, simple weapon proficiency as well as proficiency with the longsword, spear and longbow and all armor and shields expect tower shields. They gain full BAB-progression and good Ref- and Will-saves. At 1st level, they gain primary hoof attacks (1d4) and at 2nd level, they get +1 natural AC. 3rd level provides +10 ft. movement and 4th level increases their size to Large, but retains the Medium, undersized weapons. As one complaint, the table notes damage increase for the hooves to 1d6 at 4th level, which the ability does not note…so which is it?

Attribute-bonus-wise, centaurs gain +2 Str, +4 Dex, +2 Con, +4 Wis, +2 Cha, which is imho too much for the precious few levels. The centaur write up fails to address magic item slots (barding vs. armor?) and the old ladder conundrum.

The second race/class would be the Minotaur -racial trait-wise, these get +2 Str and Con, -2 Int and Cha, are Medium monstrous humanoids with 60 ft. darkvision, +2 to Perception and Survival and +1 natural AC. The 6-level racial class gets d10 HD, 4+Int skills per level, proficiency with simple weapons, greataxe and full BAB-progression as well as good Ref- and Will-saves. The minotaur class nets gore at 1d4 damage at 1st level, increasing damage to 1d6 at 4th level. Minotaurs, even at 1st level, never become lost and 6th level renders immune to maze spells (not italicized) and makes them never flat-footed, which is insanely powerful and should die. 2nd level provides scent and at the same level, natural armor increases by +2 and by a further +2 at 5th level. 3rd level also increases the racial skill bonuses to +4. AT 4th level, the minotaur grows to Large size and deals +1d6 damage when charging with his gore attack.

Attribute-bonus-wise, the minotaur gets +6 Str, +2 Con and as always in the series, no FCOs or age, height or weight tables are included.

On the same page as the glossary, we get 6 feats, which include gaining hoof attacks, rerolling saves, maze as an SP (minotaur only and lacking italicization for the spell quoted) as well as Mobile Archery (better centaur shooting), using lances as centaur (OUCH) and Running Trample.

Jeffrey Swank’s second array of savage humanoids suffer from different issues than the other more problematic installments of the series. The centaur suffers from the same friggin’ slots-issue and lack of notes regarding world interaction as every single iteration of the race I’ve seen. The minotaur suffers from a broken 6th level ability…and there is one more issue.

I’ve seen both centaurs and minotaurs done much better.

Rite Publishing’s In the Company of Minotaurs blows this out of the water. And Kobold Press’ Advanced Races Compendium sports both centaurs AND minotaurs as relatively strong, but fitting player races that don’t have the whole class/attribute-array-requirement. Additionally, all of these options provide a vast amount of cultural information and flavor.

Unlike the dragon installment, this does have some merit, though – you can potentially consider using some of the content herein to tweak your own iteration of the races if you’re not happy with Rite Publishing’s and Kobold Press’ interpretations.

Let me reiterate – this is not bad per se…but it has the unpleasant position of having to compete with some awesome products that are, alas, superior. Hence, my final verdict can’t go higher than 2.5 stars, rounded down to 2 for the purpose of this platform.