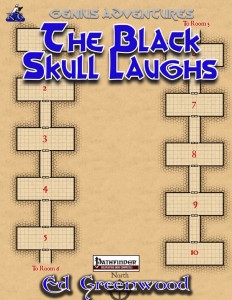 This is, layout-wise – the most boring dungeon imaginable -10 identically-sized rooms connected by 30-ft-corridors. That’s it. And yes, this is by design. The complex herein depicts a minor dwarven way station turned doom-laden crypt, recently disturbed, as per the tradition by bandits – who unleashed the so-called Black Skull. Now to clear this place and claim its riches, the PCs have an interesting task ahead of them: For one, they should get that there is a “safe route” – finding and deciphering the subtle clues that point towards it can significantly make the task ahead easier.

Now, as you know, one of my by now probably redundant rants is about how a good encounter sports proper terrain tricks and complications – well, this module *does* sport the like – in ample spades. If you realize that the author of this short module is Ed Greenwood, you also won’t be surprised at the sheer level of imaginative things that happen in these rooms:

Take for example floating sarcophagi, flying skulls and crawling hands, magical tapestries…there is a LOT going on within the few rooms of this short dungeon and the challenges are as brutal as you’ve come to expect from master Greenwood, though without the optimization tricks mostly used in new school modules; this module is pretty much brains over brawns and should drive home, within a few rooms and via the magical taunts of the mad Black Skull (using the aristrocrat class as a base, btw.), that careful exploration is not necessarily a task for the foolish. Have I mentioned comets of raw magical energy streaking through one of the chambers, roaring testimonies of the deadly tragedies that have taken place herein?

In fact, beyond interesting encounters, which universally have something unique going for them, the module also is pretty much awesome in the way in which it handles its indirect storytelling – with some legwork prior to entering the tomb and open eyes, the PCs can very much glean what has happened here – and they better should; beyond the deadly challenges posed here, they may actually end up fooled by their adversary if they aren’t careful…

Editing and formatting are top-notch, I noticed no significant issues. Layout adheres to a printer-friendly two-column standard and the pdf sports some solid stock-art. The pdf comes fully bookmarked for your convenience and with unobtrusive hyperlinks. The cartography is solid, but I wished we got player-friendly versions of the map.

You can do some great indirect storytelling with complexes your PCs explore – from similar themes and locking mechanisms to traps and the like, there are a lot of indirect ways to maintain themes of e.g. a sunken culture etc. However, this also means that some complexes ought to be somewhat pragmatic, functional, even – and thus, for once, I applaud the premise of this module. Indeed, the module actually voluntarily handicaps itself by working with what can arguably be considered the most boring possible dungeon layout.

This is Ed Greenwood, though. I always liked his notion of realism and the nasty tendency towards difficult modules and this delivers both. Each encounter herein sports some kind of intriguing, unique theme or hazard and even in the cases where a given encounter is CR-wise not too deadly, the imagery makes up for it. Now don’t get me wrong – I really like this module for its unpretentious premise and its exercise in what good ideas can do to flesh out the most basic of set-ups. That being said, at the same time, I would have wished the pdf had made slightly more use of the taunting adversary.

Now you should be aware of the fact that this module cannot be solved by rollplaying – it is pretty much old-school and rewards gamer-instincts and smart decisions. Personally, I like this, but some people might have probably liked DCs to negotiate with a giant burning head and similar solutions when the players are stumped. Now this is NOT a big flaw in my book, but something to be aware of – here and there, the deviation from what one expects as viable problem-solutions in PFRPG might well cause some consternation in groups not used to this type of thinking, this design-philosophy and here and there, a DM could probably have used a tad bit more guidance.

If you do not mind that – well, then this is indeed a cool, fun meatgrinder of a sidetrek. If old-school problem-solving or potentially very meatgrinder-y dungeons are not your cup of tea, then this is not for you – if you like them, though, then this is a great test of mettle for players and PCs alike. My final verdict hence will clock in at 4.5 stars – whether you round up or down very much depends on your personal tastes and whether you consider the premise sufficiently interesting. While I did enjoy this module and its evocative challenges and hazards, it also left me with a subtle feeling that it could have been even cooler by quoting more strongly the previous usage of the complex, hence, personally, I will round down. As a reviewer, though, I have a policy of in dubio pro reo and will round up.

You can get this neat, deadly module here on OBS and here on d20pfsrd.com’s shop!