The Rogue Alpha: A Tinker Archetype 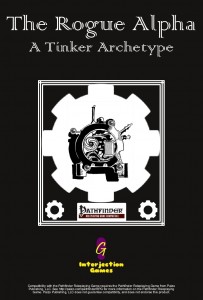 This archetype is 5 pages long, 1 page front cover, 1 page SRD, leaving us with 3 pages of content, so let’s take a look!

We’ve all been there – a treasured character dies and we need a new one – in-game, that’s a bit more problematic, though: We all remember the scene from “The Gamers”, where the group suddenly takes in the new mage standing right in front of the BbeG’s fortress. And, of course, such characters suddenly know all the information the player knew – usually this is explained via talks around the camp-fire etc., but that solution always felt unsatisfactory to me. Interjection Games has recently released the superb Tinker-class, one complex, glorious beast of a class and this is an archetype of an uncommon type. As the Tinker comes with more than the character, this pdf’s idea is essentially, that the Tinker’s treasured Alpha automaton becomes free-willed upon the death of the Tinker and BECOMES the new the player character.

As such, the archetype is uncommon – you get to play a full-blown construct and the issue of constructs on low levels are addressed. Rogue Alphas hence get their very own progression table – they get full BAB, good fort-saves and up to 12 build points as well as a maximum invention level of 6th. Rogue Alphas start game at two levels lower and may not multiclass into other classes and since the transition is from a class feature to a full-blown character, the stats are rolled upon transition – with the exception of con, since constructs don’t get a con-score. It should be noted that the archetype behaves like a  fighter archetype and as such, the Rogue Alpha gets 2+Int skill mods per level, though I would have appreciated that being spelled out in the pdf.

Now much like a tinker, a rogue alpha gets access to blueprints and an invention book, but unlike Tinkers, they can essentially only use these to modify themselves – with a caveat at a later level, but more on that later. As you can glean by now, a rogue alpha is not yet another tinker, but rather  loses all access to other automatons and at least temporarily, inventions netting class skills and skill ranks are disabled. Speaking of skills – Rogue Alphas may actually select one of their former master’s Knowledge skills as a class skill. In place of armor training, Rogue Alphas learn to scribe inventions down at 3rd level, get their int-bonus to bonus hp per level and at higher levels, may execute their integrated inventions as a move action instead of a standard action and later even as a swift action a limited amount of times per day.

At 9th level, the Rogue Alpha learns to forge a link with an automaton without opening itself to Tinker-domination and thus gains one automaton – his/her/its Beta: The Beta gains up to 7 HD, up to +5 BAB and +2 saves, up to 16 Str and Dex (starting off at 12) and 47 hit points and much like a tinker’s automatons, the Beta greatly benefits from being close to its master, gaining massive bonuses when being close to the Alpha. Later, the Rogue Alpha may deploy a minor version of itself a limited amount of times per day and may use pool abilities with the Beta and not be destroyed when reduced below 0 HP and may add permanent additions at the highest levels.

Editing and formatting are top-notch, I didn’t notice any glitches. Layout adheres to Interjection Games’ 2-column b/w-standard and the pdf has no bookmarks, but needs none at this length.

This archetype is interesting and ambitious in that it makes a construct playable and makes for a new type of character – instead of playing another tinker, you play your character’s legacy including a new class. The concept is glorious and the execution is more than solid. However, I do have one gripe – while the class is intended to be earned by gaining an Alpha via the Tinker-class, I think the period of “brokenness” at the lowest levels could have been easily solved to make this class work more universally – by making the Rogue Alpha at lower levels subject to negative conditions, for example and give them a pool of rounds per day, where they can ignore these “Prototype design-flaws”. That way, playing one of these at lower levels wouldn’t even pose a risk. Since this, while not a crucial flaw, remains a flaw nonetheless in my book, I’ll settle for a final verdict of 4 stars.

You can carry on the legacy of your deceased Tinker here on OBS and here on d20pfsrd.com’s shop!