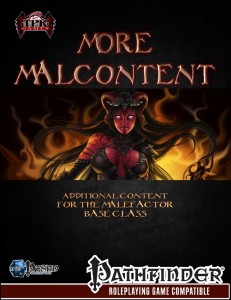 All too often in the days of old, we got cool classes -and never any support for them. Thankfully, these days are over – the 3pps of PFRPG thankfully cooperate and often support one another and their products. Rather nice is also that multiple classes have gotten supplemental products to further expand their options – which is absolutely awesome! And now, the Malefactor gets a massive expansion of the available tools – but what do we get?

After a one-page introduction to the matter at hand, we delve right into the meat with new archetypes for the Malefactor, first of which would be the Bog Witch: The archetype changes the class skills available and replaces strife surge with the ability to put on a face-paint of mud, netting cha-mod extra strife points that are used LAST and if the face-paint is washed off (it is PRECISELY mentioned how much water is required!), the points are lost. While not particularly complex, I really like how fluff and crunch are married here – a good start for the supplement.

Cavetappers get expanded weapon proficiencies , modified class skills, can’t bypass concealment via harrowed strikes and may use percussion instruments/their signature ratcheting flails to duplicate limited amounts of bardic performance-style abilities. Again, a nice blending of fluff and crunch, though not particularly complex. Frostblights change their skill lists and leave no footprints in the snow/icy terrain, tremorsense on icy terrain and 1/round roll twice and take the better result when spending a strife point in a melee attack – terrain-bound classes/archetypes tend to be problematic and this one just isn’t exciting. Essentially a filler-archetype. The final archetype is the revised Curse-Eater Archetype, gaining cursebreaker at 2nd level, gain HP from devouring curses, gain SR from devouring curses as well as the option to transfer the curses to foes. I like this one.

Next up are new feats, a total of 5 to be precise: Cursedrinker allows you to destroy cursed items, recharging your strife pool (nice feat!), whereas Split Malediction allows you to target additional foes with your maledictions, each additional target reducing the DC by 2. Hex Bringer nest Malefactor access to witch hexes, whereas draw upon the grave lets all maledictions you cast count as strife surged when within 30 ft. of a haunt or unhallowed location – which is cool, though it does pose a minor issue – if you’re like me and have started attaching haunts to items as well as locations, then this becomes mobile and permanent. Apart from that, I would have liked varying benefits based on haunt-strength/caster level of unhallowed areas. Not perfect, but still a passable feat. The final one is Oracular Conduit, which grants you an oracle-curse that progresses with your levels and also nets you access to a 0-level or 1st level spell as a spell-like ability. I assume these spells follow the Oracle’s default by working via Wis to their DC and are cast at the Malefactor’s caster-level, but the feat does not specify that, which is a flaw in my book since spell-like abilities usually work via Cha and I’m not sure which to use.

After the feats, we get new maledictions, a total of 22 to be more precise. It should be noted that the one page of advertisement is in the middle of the pdf – while I understand the reason for doing so, I also think that this is slightly problematic when printing out the pdf and is something to be aware of. Three of the maledictions allow you to create special traps like letting some overhanging things fall on foes (including damage-types for icicles etc.), trap foes in murk and create a special trap that makes those subject to it become hopelessly lost. They, like all the other maledictions, can be enhanced via dread escalation. Among the others, we get ways to deal non-lethal damage to creatures with breath weapons by turning their own weapons against them, increase your capabilities to break, lift, etc. objects, coldsnap items to impede item-use, loosen and open straps, dim lights, curse foes to accidentally buff foes or debuff allies, decrease DR, make vermin attack those afflicted with a sickly sweet stench incurred by being subjected to hateful honey, make foes easily flammable, drive creatures into a deadly rage (with some neat bonuses if you can really enter rages that deals subdual damage to the raging characters and thus works both defensively and offensively), let summoned creatures mutiny, displace items (making drawing them harder), caltrop foes, disperse animals and vermin, make incorporeal creatures more vulnerable versus corporeal creatures, curse healing via a tumor that results in confusion, divert projectile weapons and echo the damage of poisons or diseases. My favorite ability, though, would be Blind Spot, which creates its ominous blind spot in the field of vision that gets total concealment – this one in particular is simply awesome!

The first PrC would be the Black Cat Rager, who gets full BAB-progression, good ref-saves, 2+Int skills per level and may use maledictions and other spell-like and supernatural abilities while in rage. If rage wasn’t ample clue – this PrC essentially is a combination of a beast totem-using barbarian and a malefactor, enhancing claw damages and rage/rage-power progressions. Helping the Rager is harder than usual as a minor penalty for the class and it gets a choice between two capstones. The second PrC is the Hellbound Witch, that gets 2+Int skills per level, 3/4 BAB-progression, good will-saves 5 levels of spell-progression and is essentially a combo-class between malefactor and witch, allowing the class to meld hexes and maledictions into one deadly curse. You might notice something absent from my usual formula – both PrCs unfortunately lack their hit dice, essential information for using the two PrCs. I hope this crucial information will soon be added.

The pdf closes with 2 new ratcheting flails, an oil that creates artificial strife surges as well as an unluck bringing animating scrimshaw albatross.

Editing and formatting per se as a whole are neat – though glitches have slipped here and there past the watchful eyes, negating some of the appeal of this pdf. Layout adheres to a printer-friendly 2-column b/w-standard and the artworks provided are neat. The pdf comes with full bookmarks and hyperlinks for your convenience.

I love the Malefactor -as long as you’re not up to searching for DPR and if the other players are okay with that, the class rocks. That being said, the content herein is high in flavor and offers some glorious options for the Malefactor – idea-wise, this is definitely a great supplement. However, there is some filler interspersed throughout the pdf and the editing could have used another glimpse, with several rules-relevant glitches, chief of which would be the missing HD for both PrCs, detracting from what would otherwise be a great supplement. It is said glitches as well as the interspersed filler here and there that drags down what has great potential to a supplement that is good, but flawed. As such, as much as it pains me, I have to rate this down to 3 stars.

You can plunge foes into misfortune with new tools for your Malefactor here on OBS and here on d20pfsrd.com!