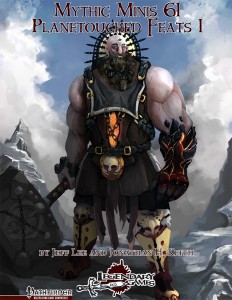 -Blistering Feint: +4 to feinting when wielding weapons that deal fire damage. Add fire damage + tier damage to foes feinted and have it risk catching fire. Foes that start burning can be targeted as an immediate action at your highest BAB. Interesting option and nice imagery!

-Dwarf-Blooded: +2 to saves vs. poison, spells and spell-like abilities, +4 to CMD vs. Bull Rush and Trip while on the ground. Okay, I guess.

-Echoes of Stone: +6 to Performance while udnerground and to Survival to avoid becoming lost there. Also, gain tremorsense 10 ft. as long as you don’t move Also: One mythic power for stone tell as a spell, with your character level being the caster level. that should probably be an SP and movement needs to be defined – after moving, for example, one stands still. Tremorsense? Yes or no? I assume, this requires a round of no movement, but not sure.

-Firesight: See invisible creatures within 10 ft. of a flame. Cool!

-Murmurs of Earth: Gain your tremorsense as a swift action. Use mythic power to expend its range to 30 ft and increase the duration by +1 round per 3 tiers you have – no minimum, btw..

-Oread Burrower: Gain full burrow speed through sand, gravel, etc. Use mythic power to make a tunnel, which collapses behind you after 1 round per tier. Alternatively, when expending mythic power, burrow at 1/3 your speed and make a tunnel last. Nice, but I wished the tunnel’s collapse referred to the collapse/buried alive rules. I also wished this allowed for control of when temporary tunnels collapse – as provided, higher tiers may make hunting down the burrower easier.

-Oread Earth Glider: Earth glide at base speed + 5 ft per every two tiers, min + 5 ft. Burrow through stone at your base speed.

-Stony Step: Move through +5 ft. of stone/earth-based difficult terrain per round as though it were normal terrain. Use mythic power to execute a charge and ignore all such terrain between you and your target and charge through creatures of the earth subtype. Also grants +2 to atk and +1/2 tier in damage to charges if you and the target are touching earth or stone. Solid one!

Jeff Lee and Jonathan H. Keith deliver an array of interesting Planetouched Feats that provide interesting extensions of the concepts of the base feats, often allowing for additional, cool tricks not available for the base feats. While not always perfect, the feats generally are a cool selection and thus, my final verdict will clock in at 4.5 stars, rounded up to 5 for the purpose of this platform.