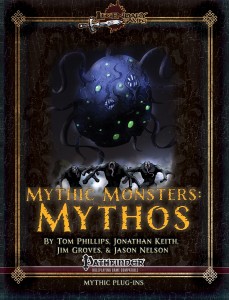 This installment of Legendary Games’ Mythic Montsers-series is all about the Mythos and 34 pages long,1 page front cover, 1 page editorial, 1 page SRD, 1 page ToC (with CR/MR), 3 pages of introduction/how-to use, 2 pages of advertisement and 1 page back cover, leaving us with 24 pages of insanity-inducing threats, so let’s take a look, shall we?

This pdf kicks off with a nice legendary games-synergy that explains the [mythos]-descriptor for magic and also, as a subtype, before providing new mythic path abilities: Archmaes and Hierophants may learn elder signs: These signs are not only described (which allows players to actually make them!), these 4 signs allow for the addition of the mythic tier as bonus to identifcation of mythos-magic, improve conjuration/summoning, blocking extraplanar travel and improve objects or enhance your banishing/dispelling prowess. Oh, and before you ask – yes, we actually get a concise list of creatures from Paizo’s bestiaries that would be “mythos”-compatible. The second ability, available to archmages and tricksters as a 1st tier ability, would be alien alchemy, which makes all alchemical items (including bombs) more potent versus creatures of the mythos.

Beyond these, we also are introduced to 4 new alchemical compounds: From the cha-enhancing incense of Xakauba to the mythos-specialized dustof appearing that is the powder of Abu Ghauzi or the Space Mead that allows for survival sans air or the vision-inducing Unguent of Khefnis – these alchemical compunds are awesome, come with prices and Craft-DCs and all have options to use mythic power to enhance their potency even further: Sheer coolness and two thumbs up for these; Now can we have a whole book of them please?

But this is a monster book, so let’s take a look at the monsters and their mythic abilities, shall we? The weakest adversary herein would be the Celebric Fungus at CR 4/MR 1 – proximity to these threats blurs the vision of unfortunates to the point where otherworldly phantoms hamper their ability to strike their targets. Non-mythic creatures having to save twice versus their enchantments also makes for a rather nasty effect, as does their nauseating scream or daze-inducing touch.

Mythic Denizens of Leng get perhaps one of the coolest, weirdest abilities I’ve ever seen for a creature – whenever they would take bleed damage, said damage is negated, as their blood flies through the air in an extra-corporeal form of blood-circulation that defies the laws of gravity – among others. This, however, also results in their toxic blood being sprayed at attackers. Beyond the mythic enhancements to their abilities, a damn cool idea. Mythic faceless stalkers learn, by the way, to change between their own and a humanoid’s face is a maddening cascade of rubbery flesh that may result in the disassociation spellblight as well as cha-damage… Gibbering mouthers of the mythic variety may make the duration of the insanity their babbling causes last longer and add the gibberish of their confused victims to their own potent powers, while Mythic gugs may entangle foes in their own intestines… EW!!! (Also, this may cause severe damage to all physical stats…)

Mythic Hounds of Tindalos may bilocate, i.e. exist twice at the same time by importing themselves from the future, netting them one of the most powerful, cool abilities I’ve seen in quite some time! Worse, they can manipulate the fate of their victims, forcing them to roll checks multiple times, taking the worse result. Have I mentioned the ability to duplicate detrimental effects they cause? These things are no truly frightening! Mythic Leng Spiders, with their nigh-indestructible nets and the ability to  draw targets into other planes are cool, but don’t manage to reach this level of abject awesomeness.

Mythic Moon Beasts learn to send helpless victims into a coma that has them transform into denizens of Leng and mythic Neh-thalggu learn to share telepathic visions of their terrible home-world, damaging their sanity and on the defensive side, they may use mythic power to shift through space and planes. Mythic Shantak can channel the void between the stars, dealing a bit of damage and heaping detrimental conditions upon hapless PCs or deliver devastating flyby attacks. Finally the CR 24/MR 9 mythic shoggoths can spawn non-mythic shoggoths or implant embryonic shoggoths in targets and they may also counter each and every attack with an AoO – suffice to say that gravity does not hold sway over these terrors. The final creature, the Mythic Byakhee, gets the ability to molt with nightmare-inducing results and create noxious acid pits to boot.

Editing and formatting are top-notch, I noticed no significant glitches. Layout adheres to Legendary Games neat full-color two-column standard and the pdf comes fully bookmarked for your convenience, as well as with hyperlinks – at least partially. Due to some sort of strange glitch, the Denizens of Leng, Gibbering Mouther, Hound of Tindalos, Leng Spider, Moon Beast and Greater Byakhee all lack the hyperlinks, while the other statblocks feature them. Weird. The two artworks herein are okay, though slightly less awesome than usual for Legendary Games – they did not drive home the sense of fear I expected.

I’m a sucker for mythos-threats, as just about all of you by now will probably know, and these mythic creatures are actually CLOSER to what mythos creatures should be able to do than the base creatures, which, at least for me, more often than not fall short of the weirdness they should be able to accomplish. The authors Tom Phillips, Jonathan Keith, Jim Groves and Jason Nelson have delivered a bestiary, which I will use to represent mythos-threats in non-mythic games – these beings should evoke terror and that they do, thanks to the vast array of unique, new, cool abilities! The amount of iconic signature abilities, the cool supplemental material – that’s the icing on the cake and more than enough to offset the rare case when one particular version does not 100% live up to the level of awesomeness of the others. The inconsistent hyperlinking would be my only other gripe, but at least for me, that’s not enough to rate down a supplement that vastly enhances the alien terror and thus enriches our games – not necessarily exclusively on a mythic level. My final verdict will hence clock in at 5 stars + seal of approval.

You can get these terrible threats of the mind-shattering variety here on OBS and here on d20pfsrd.com’s shop.