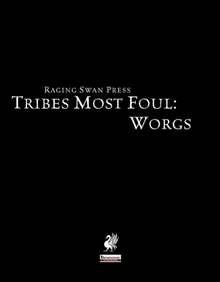 This installment of Raging Swan Press’ Tribes Most Foul-series is 11 pages long, 1 page front cover, 1 page advertisement, 1 page editorial/ToC, 1 page SRD and 1 page back cover, leaving us with 6 pages of content, so let’s take a look!

As always with TMF-supplements, each tribe herein comes with a full tribal roster, lore-DCs to glean knowledge on the respective tribe, information on combat, tactics, ecology, lairs and habitat as wella s advice on how to place the respective tribe in the campaign. Beyond that, we also get some fluff-only NPC-write-ups and one NPC-statblock per tribe. Now onwards to the tribes!

The first would be the “Howls from the Desolation” – separated by some cataclysm or earthquake from the landmass, the hunting ground of these worgs is inexorably drifting towards the southern pole and ever colder climates, with the ecosystem of the drifting landmass declining ever further, while the two-caste pack of worgs and winter wolf bone witches are faced with ever decreasing amounts of prey. The sample advanced old bonded winter witch 9 winter wolf makes for a “cool” (haha!) sample NPC here and as a nice little bonus, the bonded bone witch-spells are included in a small box here. Overall, one cool pack, also fitting for northern climes, impending ice-ages or simply desolate places like Slumbering Tsar’s Desolation – especially in winter.

The Gaolers of Bleakmoor would be uncommon, to say the least – from skeletons to fast zombies, shadows and even vampires, these worgs may once have been alive, but now they are undead menaces, bound to the will of *drum roll* the dread Cossaylor, an advanced antipaladin 14 worg (CR 19!) LICH! This tribe’s concept is so incredibly awesome, I can’t emphasize it enough – beyond the desolation of the first tribe and its theme of desperation, here we have perfect fodder for horror in its truest form – simply glorious!

Hard to follow that…so what are the Regnant Void worgs about? Well…essentially about night hags interbreeding with worgs to create changeling worgs that haunt the dreams of those unfortunate souls doomed to a be rendered mindless, catatonic wrecks by their nightly predations. Yeah. And you thought undead worgs were bad news… And yes, this tribe is wicked indeed, its sample character being a changeling worg cleric 8.

Editing and formatting are top-notch, I didn’t notice any glitches. Layout adheres to RSP’s 2-column b/w-standard, though, as befitting of worgs, we this time get no tribal standard. The pdf comes in two versions, one for screen-use, one optimized for the printer and is fully bookmarked.

This TMF-installment is uncommon – not humanoids, but friggin’ worgs. What can one expect? I expected some marauding packs with different social structures – the like. Pff. David Posener went above and beyond awesome and has created three thoroughly unique, evocative tribes worthy of your support – full of awesome ideas, storytelling potential and uniformly divorced from being common in any way, these worgs deserve to be feared and admired – we get the so far best Tribes Most Foul-installment, on par with certain were-creatures and a definite recommendation – these dark, disturbing hunters deserve to be let loose on your unsuspecting players – make them fear the howling in the night again! Triumphant 5 stars + seal of approval are the only possible verdict here!

You can get these cool packs here on OBS and here on d20pfsrd.com’s shop.