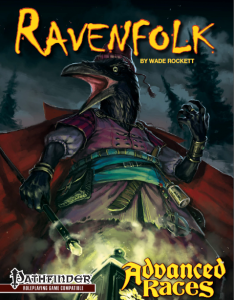 This installment of Kobold Press’ Advanced Races-series is 19 pages long, 1 page front cover, 1 page editorial/ToC,1 page advertisement, 1 page SRD, leaving us with 15 pages of content, so let’s take a look, shall we?

All right, let’s get one thing out of the way – I LOVE Tengu and I adore the Midgard Huginn – blending one of my favorite races with a distinct Germanic/Scandinavian tone, the fluff of this race is simply glorious. Idea-wise…but can the content stand up to the concept? Racial trait-wise, Huginn (or Heru/Heruti, as they are known in the South…) get +2 Dex and Wis, – 2 Con, 30 ft movement, low-light vision, +2 stealth and perception, +4 linguistics (and two languages per rank invested) and are sword-trained (read proficient) with ALL sword-like weapons.. A list of examples are given and honestly, I don’t get why punching daggers have been included in it. Seeing that weapons like elven curve blades and kukris are included, I think a slightly tighter set would have been still enough. They also get a 1d3 bite attack, which I assume works as a primary natural weapon, though the pdf does not explicitly specify that. Fluff-wise, the insights into Ravenfolk culture, psychology, nesting as well as the unique concepts as conveyed per their intricate Feather Speech, which contains otherwise untranslatable concepts – this chapter is just awesome. Did you for example know about the Huginn rookeries and ghettos, about the tsar of Vidim using the Huginn as elite-soldiers and spies? We also get to know about the Huginn of Zobeck as well as those of Nuria-Natal before being introduced to the Ravenfolk’s take on various adventuring classes.

A total of 13 alternate racial traits are provided, allowing you to flavor your Huginn as servants of Horus, Wotan etc. Huginn blessed by Wotan may for example learn to speak with the dead, southern mystics arcane sight (though the spells are not properly italicized). Another trait allows the huginn to get a 1d8 claw attack in lieu of being swordtrained – I assume as a primary natural weapon, but I’m not sure since the pdf fails to specify. Also: Does this claw attack qualify as improved unarmed strike? While from the standard-rules it of course doesn’t, it would be kind of cool as an idea. (And no, I won’t hold that against the pdf.) Another trait allows for the investment into the fly-skill (and said skill as a class skill) sans having access to a fly speed as well as for the diminishment of falling damage via the fly skill.

A total of 6 racial feats allow for further customization, with those born from the bloodlines of Huginn and Muninn, the ravens of Wotan, being able to reroll saves versus enchantment or transmutation-spells 1/day – neat! The other 4 feats unfortunately offer cool fluff, but also rather lame +2 bonuses to skills as well as bonuses to e.g. damage versus aberrations, saves versus necromancy etc. Oh well, the fluff of the feats at least is rather cool.

We also get new archetypes: Wotan’s Doomcroaker-oracle get clairaudience/clairvoyance as a spell-like ability (AGAIN not italicized) or contact other planes. The capstone allows for legend lore AT WILL as well as automatic stabilization and immunity to fear effects, though at least the stabilization will be all but inconsequential at this level. An ability for more negative HP until the oracle perishes would be neat… Marc Radle’s excellent spontaneous caster, the Shaman-class, gets new fodder with the Black feather, which nets the shaman not only relatively fast flight and the ability to assume avian shape, but also feather fall at will and the new corvid spirit guide. Sea Ravens are essentially huginn vikings that can forego basic weapon dice (i.e. dealing only str-mod damage plus similar modifiers) for free intimidates as well as bonuses while at sea and later the rapid attack quality of the mobile fighter archetype. Tomb Raven Wizards double numeric effects of spells targeting undead, which makes them superb slayers of undead and deadly necromancers – to the point where I’m not sold on the effects – doubling? Seriously?. They also get an additional attack on the turn after an ally’s been reduced to 0 hp or fewer –  though this ability needs specification: Is this attack an action? Is it executed at the highest BAB? What if there is no eligible target? This one needs cleaning up. The final archetype would be the Thief of Secrets is an acolyte of the teaching of Thoth-Hermes and gets detect magic at will as well as 1/day obscuring mist and passwall. They also are specialists of fighting with quarterstaffs. Okay, I guess.

We also get 6 new spells – an improved level 3 version of fox’s cunning (and its mass version), a cantrip for strange obscure pieces of knowledge from Mimir’s Well. Mine! makes an object of your desire (at close range, but the spell lacks the precise range usually included in spells) insubstantial. This spell is a can of worms – when cast on magic gear, for example, does the wearer becoming incorporeal prevent the item from falling? What about cursed items? Those that require attunement periods? The idea of the spell is cool, but the execution would require a significantly more detailed text. Ravenfolk’s Revocation allows the caster to prevent creatures from flying, but thankfully only works on creatures already on the ground. Cool one! Finally, Shrieking Flock acts as Mislead + a frightening effect for targets with not that many HD. Nice variant.

Editing and formatting are good, but far from perfect – while there are not that many issues in the rules-language as in the Dragonkin-installment, the amount of avoidable italicization-glitches is a bit annoying. Layout adheres to Kobold Press’ beautiful 2-column full-color standard for Midgard and the artworks in full-color and b/w are universally awesome. The pdf comes fully bookmarked for your convenience.

Author Wade Rockett has delivered a compelling supplement here, but one that sees me torn – the crunch herein, while not flawed, just isn’t that inspiring – rules-wise, you will not be wowed by this supplement. Where he instead excels is with the fluff – the insights into Huginn society and psychology, the fluff behind many of the pieces of crunch – they are awesome and make the at times downright bland bonuses e.g. a couple of feats deliver seem almost jarring. Where the blending works best, superbly so, in fact, is with the items, both mundane and magical – they are universally awesome, cool and fun and deliver an eclectic blend of storytelling potential/narrative-driven options, unique weapon-enchantments and culturally significant items – were this just about the items, this would be 5 stars + seal of approval.

Alas, it isn’t and I have to take the relatively uninspired feats and archetypes, the problematic spell, the formatting glitches etc. into account – and, unfortunately, they do drag the pdf down from the heights that the information on Huginn culture, the items and superb coolness of the fluff would deserve. In the end, I will settle for a final verdict of 3.5 stars, rounded down for the purpose of this platform because though personally, I value ideas above everything else, the minor issues add up. However, one can still design/assign other rules to the ideas herein, whereas ideas are what inspires one to do so, and idea-rich this indeed is – the author has taken more than a tiny sip from Mimir’s Well. One final caveat: When not using this in Midgard, i.e. ignoring the fluff, detract 1 star from the rating.