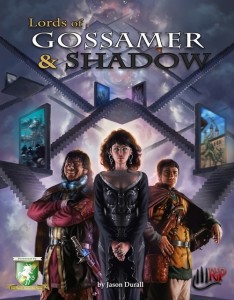 This massive sourcebook for Erick Wujcik’s Diceless system is 168 pages long, 1 page front cover, 1 page editorial, 1 page list of patronage/Kickstarter-thanks, 1 page ToC, 1 page back cover, leaving us with 163 pages of content, so let’s take a look, shall we?

Born from Amber Dicelss Roleplaying, LoGaS depicts a setting which, unsurprisingly, makes use of countless worlds – the Gossamer worlds, made real by ethereal, true power. These countless worlds are connected to another via the Grand Staircase, an unfathomably huge staircase that features countless doors leading to countless gossamer worlds. Behind the screen, the forces of eidolon and umbra wage war eternal – eidolon being the force of supreme structure and organization, the ideal form of the multiverse, whereas umbra, its opposing principle, is essentially the chaos and entropy that seeks to undo all – the shadow lurking between gossamer worlds, constantly striving to claim worlds – whether temporarily or permanently. You are one of the travelers of the grand stairs, made aware of its countless possibilities, as mere wandering it starts to enhance your prowess to superhuman levels – the lords and ladies of gossamer are indeed powerful enough to change the destiny of whole worlds and have carved mostly secure worlds from the vast number of them. But balance demands duality and hence, there are the Dwimmerlaik, servants of the shadow that wage war unending on the self-anointed wardens of the great stairs.

Now after a short glossary of basic terms for newcomers, we dive into character generation – First, you choose a concept (more on those later) and then, you assign 100 points – you have to buy attributes, powers and extras from this array of points – the thing is, you may undercut or overstep this – earning good or bad karma. Rather cool! Also unique: All characters start at superhuman levels in all 4 attributes – you can get more points by cutting down to various mortal levels, though. Now attributes are handled via an auction at character creation – whoever bids highest, becomes ranked one – this character cannot be surpassed by the others in the given field, only approached. The auction per se comes with step-by-step guidelines, two alternatives/modifications to the system and easily and comprehensibly presented. Essentially, the player’s bidding determines the relative power rank and how many points its costs to be up there -almost, for later buying attributes nets you .0.5 ranks on the ladder – you’re almost, but not as god as the one that has the full rank. It should be noted that only characters who do not bid for an attribute can diminish it to paltry mortal levels, thus gaining more points budget. And you’ll want those points, for powers, among which easy egress to the great stair, can be found, also cost points – a LOT points. Mastery of the power of eidolon or umbra e.g. costs a whopping 50 points. Now I mentioned bad karma – it’s essentially what is called “Stuff” – having bad stuff means that the universe treats you rather badly: Rain, unpleasant reactions etc., while good stuff means the opposite. It should be noted that the book does something smart in offering players points for e.g. selecting background music, making quote lists, campaign diaries, quest logs etc. – which is awesome and a practice I’m using in a modular version in campaigns throughout the systems I play.

Of course, a Gamemaster also has some say regarding e.g. parents, allies, mentors and items – character creation is essentially a dialog here – which is great for storytelling and assures a more fulfilled playing experience for everyone. The 4 attributes (psyche, strength, endurance and warfare) are well explained and the powers also have a lot of material herein – from essentially having a list of magic (including words of power to utter when invoking the spells) to the privileges that powers grant, each has a lot of different options available – with the exclusion of hard numbers/dice, the sky is the limit for more than a few of these, including a very wide array of different modifications of creatures and artifacts, allowing you to essentially design beings and items to your heart’s content – again, costing those precious points, though… And the interesting thing here is, that secret bidding and precise capabilities are not known to the other players – after all, much like in Amber etc., intrigues and yes, potentially even fighting among the player characters is a distinct possibility… – which also makes character advancement interesting – upgrading to the next rank on the attribute ladder is done by the GM (since you don’t know the final results of the auction after the secret ranks have been added…) and may mean you incur bad stuff – rather interesting.

Of course, combat is rather different from most other settings due to a) the PCs being essentially demi-god-level paragons and b) there not being any dice around. Hence, GMs get a lot of advice and examples on how to handled combat, PC death and similar situations -and on how running a diceless game changes the overall tone of a roleplaying session. And yes, these are things to consider and make players aware of – with immature players, every situation could turn into an argument and much like in character generation, all is dialog here and hence, Gamemasters in particular should take a very close look at all those examples and take them to heart as well as explain to the players how different the experience will turn out to be.

Now, of course, we also get the setting-information – R’lyeh, Valhalla, Hell – everything you can conceive exists on the Great Stair and the Gossamer Lords & Ladies and their war with the Dwimmerlaik as well as the opposing principles of eidolon and umbra already make for a compelling and rich tapestry of options before the sample lords & ladies of gossamer and the both named and generic dwimmerlaik are presented – the latter of which get access to a deadly tool called channeling, which does btw. an awesome job at keeping them a viable and deadly versatile threat to even the powerful demigods the player characters are. Add to that undead, minotaurs and similar mythic beings, shapechangers etc. and we have a nice arsenal of adversaries ready.

The book also contains a short introductory module, adventure seeds, a list of inspirations, a reference-appendix, a note of thanks by the author, an index and a total of 3 sheets, one of which allows a player to design his/her own domain. (Yes, I forgot to mention that one – you can, of course, have your own home-base/world/plane…) Oh, and the pdf comes with form-fillable char-sheets.

Editing and formatting are top-notch, I noticed scarcely any minor glitches. Layout adheres to a beautiful 2-column full-color standard with purplish/violet, unobtrusive borders. The pdf comes fully bookmarked for your convenience. Beyond the books initial patronage model, Rite Publishing ran a kickstarter for more art – and oh boy, does it show – this is one of the most beautiful books I’ve ever seen a 3pp produce – the artworks are classy, awe-inspiring and make you want to craft the depicted characters immediately, evoking a wide plethora of associations and at the same time carrying a very distinct flair and unifying artistic vision. Glorious!

When I was a child, I played diceless with my friends – though not the system. We’d run around outside in the garden, venture into the forests, and our characters would have special powers, which we determined beforehand – thus, by climbing on top of trees, lying down on mossy earth, scavenging raspberries and evading noisy squirrels, we walked through a land crafted by our own imagination, a world layered atop our own, where wonder and endless potential loomed, where our fantasy was the only limit. Video-games proved to be fun inspirations for us, but nothing ever came even close to our holistic fantasy of universal wonder, the countless tales we had woven.

Then life happened – one can, alas, not remain blissfully ignorant and this world’s gossamer weave clings closer and closer, until the doors of one’s fantasy start slamming shut, becoming mere windows that still can provide a glimpse of the exceptional, but that’s it. And sooner or later, we have to concede that “The kids aren’t all right”, as harsh realities come crashing down.

Roleplaying, to me, recaptures a tiny fragment of this spark of immediacy once lost, a means of weaving a yarn greater than the sums and ambitions of its parts. The catch is – ultimately, more often than not, the rules get in the way. “You can’t do that.” And while I love the thrill of the rolling dice, at times, I long for a storytelling where one jumped across a bed of flowers, imagining carnivorous plants or seething magma, one essentially all but unhampered by restrictions or balance-concerns – and this is as close as you can probably get to it. Jason Durall has created a setting that is similar enough to Amber’s tradition to keep fans happy, while at the same time, at least in my opinion, expanding the possibilities – this setting transcends fantasy and sci-fi, horror even, as genres and allows you to tell YOUR story – with no limitations to your imaginations but those you and your players compromise to adhere to. This book does so much in inciting the imagination, it’s almost unbelievable – this is collective storytelling, codified by a solid, easy to grasp ruleset that keeps balance sans impeding any sort of creativity. I am extremely positive that just about any DM (and even player) can benefit from reading this book, even if one does not intend to run a campaign – why?

Because this book makes it possible for you to experience once again the wonder, when you fought Godzilla with Excalibur, when your cyborg-buddy cast the spell to seal the devil in your lamp, when the power rangers duked it out with the Ninja Turtles and you were caught in between.

Oh, and one thing – this system does not require you to be at a table – provided everyone knows the rules, you could quite frankly play this system with tucked in char-sheets while hiking, camping and doing similar activities, perhaps adding a slight LARPish tint to it for additional fun (“All right, if you manage to jump across this little tree stump, then your character can do XYZ”) – be responsible, though! I know that’s how I will probably use this game.

If you haven’t noticed by now – I love this system. Will I make it my dominant one? No, I love rolling the bones too much and a bit of roll-playing, frequent character deaths etc. are exciting to me and my players. But once in a while, a very pure ROLEplaying experience, one that omits the “roll”, is glorious and quite probably might change how you think about our hobby, storytelling etc. Oh, and if you’re like me, this book will open doors towards realms of inspiring, unbridled creativity you deemed once lost – recapturing some components of that magic, where everything, for a moment at least, is possible. My final verdict will clock in at 5 stars +seal of approval.

You can get this cool system/setting here on OBS (also in print!) and here on d20pfsrd.com’s shop.