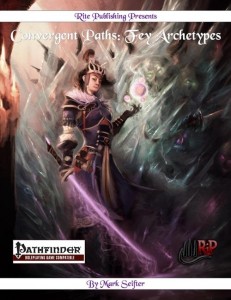 The second installment of Rite Publishing’s Convergent Paths-series is 16 pages long, 1 page front cover, 1 page editorial, 1 page SRD and 2 pages of advertisement, leaving us with 11 pages of content – so let’s take a look, shall we?

Following the direction established in the first issue, we once again have the class options provided herein framed by a well-written narrative – and honestly, I do really enjoy these. If you read as many crunch-heavy supplements as I do, you’re welcoming supplements that don’t read like an EULA. Just wanted to for once acknowledge this, as the narrative also roots the content in a thematic context and, from experience, I know that my players prefer it like this – fluff accompanying their crunch. That out of the way, let’s take a look at the Faerie Knight, a cavalier archetype.

The challenge of these cavaliers is less reliable that the base challenge – the damage to challenged targets only scales up to +10, but depending on the level of the faerie knight, bonus damage equal to +1d3 (up to +6d3) is added to damage – nice way to represent a more chaotic version of the class feature. Faerie Knights also add the fey creature template to their mount, but thankfully not at once, instead improving over the levels. The mount is intelligent and requires gold to be replaced once it dies. The faerie knight does lose banner, greater banner and tactician for all this gained power via the mount though, and while it doesn’t require Handle Animal, it has its own mind – which can be quite interesting. Not needing expert trainer, the knight also gets a bonus to social interactions with fey. At higher levels, the faerie knight may send his mount to the realm of the fey to procure assistance from the fey – though frivolous use will have repercussions…

Monks may now opt to become so-called Laughing Men – who get Bluff, Diplomacy and Knowledge (nature) as additional class skills. Laughing Men get a new array of feats to sue with bonus feats in lieu of their regular ones and also replace flurry of blows with the option to make feints, intimidates and wild empathy checks at -5 as part of a full-attack action, allowing the archetype to later even make a second check with an additional -3 penalty and at 15th level, even a third one at -7. Furthermore, he can use ki to roll social skill checks twice, taking the better result. When using this ability, the laughing man doesn’t even have to speak the language of those s/he taunts and may use said options versus plants, animals and vermin, treating them as if they were not mindless. He also becomes harder to demoralize/influence, gets the wild empathy class feature of the druid. By the way – the words of the Laughing Man are just as efficient as sticks and stones and may break your bones! As part of the flurry of words, the laughing man may use words as ranged unarmored strikes with a 5 foot range increment.

Instead of purity of body, at fifth level laughing men may use wis-mod for bluff, diplomacy, intimidate and wild empathy, but need to expend their swift action to do so – which becomes relevant when learning to feint/demoralize etc.  – 3 foes at once. Plus, laughing men may divide this ability between feints and demoralization attempts Starting at 15th level, he may make three of these skill checks versus one foe – when succeeding in 3 bluffs/intimidates/wild empathy, laughing men may opt to negate the effects of all successes for one unique effect depending on the skill employed.

The third archetype herein would be the masquerade reveler – for the barbarian! And be forewarned – these revelers are nothing for players shying from the task of additional book-keeping. But oh boy is it worth it – instead of regular rage, revelers create so-called masks, which consist of 4 evolution points. For the purpose of which evolutions qualify, the reveler counts as biped humanoid with arms and legs. At each barbarian level, the reveler gets another masque, providing quite some versatility. Type of ability, effective levels – all of the complex questions such a system will perpetuate, are addressed – kudos! I did try to find an instance of less than precise rules-language and found none.

The abilities the reveler gets at later levels further enhance the awesome concept of masks.

After these archetypes, we are introduced to feats of the fey,7 to be more precise: Faerie Knights may improve their whimsical challenge by expending a second use of it to maximize the d3s involved. And if you really want to get nasty, you can take another feat, that allows all allies to also get these maximized d3s when you utilize the former feat. OUCH!  Three of the feats make up for a feat-tree of the Sidhe style, which adds additional benefits to those feinting or intimidating successfully at a base level. The two follow-up feats allow you to make demoralized opponents provoke AoOs from your allies or further penalize foes you feinted. Revelers may spend 3 rounds of masquerade to change masks in combat. With the second feat, you can get a bonus after using the change of masks for the second time in combat.

The pdf also provides us a new sample creature, the CR 7 Gancanagh. that secretes a new drug (provided as well!) and may exude an aura of selective silence while plying his socially based, mindbending abilities. The fey also comes with cool signature weaknesses and a bond with one of its possessions that makes for good adventure hooks/smart fighting-rewards. Speaking of adventure hooks – 3 sample ones are provided.

Editing and formatting are top-notch, I didn’t notice any glitches. Layout adheres to RiP’s 2-column full color standard and the pdf comes fully bookmarked for your convenience. Special mention deserves the gorgeous cover by Kevin Ksottam as well as the neat artworks herein – two pieces in particular I haven’t seen before and apart from one classic stock art image (which fits in nicely, though), they are rather impressive.

This is, at least to my knowledge, author Mark Seifter’s first PFRPG-product and it is promising indeed – the whimsical challenge class feature and its feat-expansions rock – though honestly, the fey mount feels bland. Yet another pet-archetype? Come on! There’s nothing wrong here, but think about it –  getting a horse that can change into equipment /buffs (yes, can be found in mythology!) would have imho been so much cooler than getting a strong, slightly more useful mount.

The laughing man suffers most from these archetypes:

On a concept-level, it lacks a loosening of the lawful alignment restriction and honestly, basing it wholly on demoralize and feinting has been done before as well – not in this combination, granted, but still. Beyond that, the archetype is even more MAD (multiple attribute dependant) than a regular monk – who already has it worse than any other class: Requiring cha for the signature skills and Int for skill ranks, this archetype imho requires a realignment of cha-based skills to wis or wis-based powers to cha as well as increased skills per level. Furthermore, I’m not sold on the massive skill-based usage – 3 rolls to get a unique effect at high levels? Ok, that is MUCH leeway to roll bad once and waste a lot of other potential benefits. Additionally, the unlimited use of unarmed strikes at range is VERY powerful and should have some kind of cap. Also: The fluff concept of paradoxes/words are weapons is simply not that well integrated mechanics-wise. At this point, I was rather disappointed.

And then – BAM! The Reveler. O.M.G. This one is so GLORIOUS. Seriously, this archetype ranks among my favorite for the barbarian – in ANY publication. The supplemental feats  range from cool to a tad bit on the weak side and the new creature once again can be considered a winner.

Author Mark Seifter definitely has potential – there is nothing terribly wrong with the first archetype and while the laughing man fails rather miserably at what it sets out to do, the reveler makes more than up for this by its pure unadulterated awesomeness. The supplemental content and prose suffusing the pdf also do their share in making this pdf a well-worth purchase for you, if not a perfect one. The Reveler alone is worth the fair asking price and hence, I’ll settle for a final verdict of 4 stars and remain in anticipation of the author’s next offering.

Don a masque, start laughing and join the dance of knights and ladies here on OBS and here on d20pfsrd.com’s shop!