Courts of the Shadow Fey 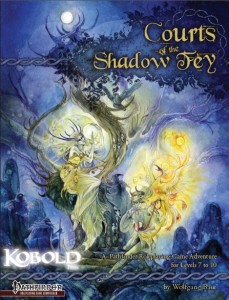 This mega-module Kobold-in-Chief Wolfgang Baur was originally released for D&D 4th edition, but I can’t comment on that once since I don’t have it – I only have the PFRPG-conversion done by ennie-award winning designer Ben McFarland. That being said – I’ll break my usual format for adventure-reviews – to pieces. I’m not going to go through this step-by-step – the review would become redundant fast and extremely long to boot. Instead I’ll just say one thing:

GET THIS NOW. Seriously. Buy it. Give it as a gift to your DM. If you’re a DM, get this NOW. If you, for whatever reason, want to buy only one Kobold Press-adventure – BUY THIS ONE.

You’re still here, aren’t you? Ok, I guess I have to do better.

First of all, let me address that this book features skill-challenges, i.e. obstacles your combined group can surpass by combinations of skill checks, with each player contributing (hopefully) something to the fray – they are designed in a way where even fighters will have something reasonable to do. Furthermore, above and beyond and a great help for DMs a bit weak on the fluffy roleplaying side, suggestions for the respective argumentations on why the skill in question works/doesn’t work are given. Beyond these even, class abilities, spells and feats feature into the respective checks and get covered in a level of detail I’ve never ever seen in any publication – without bloating the book. And if you don’t like skill-checks, you could still use these pieces of information as simple roleplaying guidelines. The same holds btw. true for incantations, which, while a part of the module, do not occupy a crucial role and can be abstracted rather easily. Ben McFarland has done an astounding job of translating the module into the context of Pathfinder-rules. It should also be noted that the module is relatively light on Midgard-specific fluff, i.e. it can be transported to Golarion or any other world you choose with minimum hassle – you just have to switch out cosmetic terms like “Zobeck” for another big city name and there you go.

And that’s about it regarding the formal qualities of the crunch – next up follows a VERY BRIEF synopsis of what you can expect – and thus from here on out reign the SPOILERS. Players, do yourself a favor and jump to the conclusion. You don’t want this one spoiled, believe me. I’d actually love to play this, but having read it, that is out of the question.

All right, we kick off when Zobeck (or another big city of your choosing) experiences a swift occupation: One day, everyone wakes up and finds that the shadow fey now run the town – and who violates their capricious decrees has to contend with their harsh, humiliating repressing punishments. Turns out after some research and diplomacy with the envoy of the scáthesidhe (shadow fey) and some reading between the lines, that an obscure deal between the former ruling family and the shadow fey has expired and that they now consider the city their domain – with an almost unstoppable Statthalter on the way.

In order to reclaim mortal sovereignty over the city, the PCs have to research a ritual to send them off on the perilous journey towards the home of the shadow fey – and should they survive this journey into the very heart of shadow, they’ll be surprised: The Scáthesidhe have made elitism a form of art and at first, the courts seem empty – those of too low status actually can’t even perceive the upper ones of the layered, fey-glamour-clad echelons of the courts and in order to gain an audience with the queen of the fey, they’ll have to first rise in status. From lowly goblin servants, lantern dragonettes and fey rakes to the higher echelons of court, the PCs will require all their wits and capabilities to survive the perils of the dueling season and slowly work their way up through a court enamored with the theft of memories, illusions and deception. Courtly intrigue and harmless and not so harmless pranks abound even before the PCs become aware of the existence of the Demon Lord of Roaches as a fixture in the court, of the various deadly factions (which include a celestial and old weaving crones that are more than they seem) or of the alluring courtesans and courtiers that can play a pivotal role in the rising through the ranks of the courts – if the PCs can manage to win (and keep) their favor. And yes, the affections of the shadow fey may very well turn out to be something rather problem-laden, as some of the numerous NPCs, both mortal and immortal that frequent the courts can attest to.

Even before the Black Prince’s favorite quickling swordmaster challenges the PCs, even before the factions start actively recruiting PCs, we actually get a codified, complex and thoroughly rewarding rules-framework for the depiction of rising through the ranks of a court, a system, which when reskinned towards mortal courts, could be used for Song of Ice and Fire-like machinations. And I have only scarcely touched upon what there is to come – what about e.g. a hunting trip with the hostile and antagonistic Black Prince and a chase for the immortal firebird, represented via a cool, mapped mini-game? The very best banquet-scene I’ve ever seen in an adventure – easy to run, complex and thoroughly weird? A roach-like, loyal warrior who just wants to find a nice place to lay eggs – which have to unfortunately hatch from a body? The lists upon lists of events, intrigues etc.? The glorious maps?

What about the fact that the finale, after the PCs may finally get their audience with the Queen, requires them to find the insane Moonlight King in a maze of light-hazards and unique dangers and either kill him (in a fight that challenges brains and brawns) or convince him to  abstain from the claim to Zobeck? Have I mentioned the potential to transcend the bounds of mor(t)ality in the aftermath of this module?

Editing and formatting are the one weakness of this module – while not bad by any measure, I did notice a couple of editing glitches that could have been caught and here and there a small conversion relic in places where their presence is not crucial in any way. Layout adheres to a beautiful 2-column b/w-standard and the provided handouts and maps should water the mouths of any aficionado. The artworks are original b/w-pieces that fit thematically well within the context of the book, creating a seamless, unified impression. The pdf is extensively bookmarked for your convenience, though I’d still recommend getting dead-tree for this one.

Wolfgang Baur and Ben McFarland are immensely talented designers and authors – that’s no secret. But even as a fan of many of Wolfgang’s pieces, I can’t recall any one that blew me away like this one did. Not one. This is the 123 page refutation of the claim that social interaction in Pathfinder is boring, the triumphant sneer in the face of all who claimed that d20-based systems with their combat-focus don’t lend themselves to social interaction, court intrigue or any scenario, really, that requires subtlety. “Courts of the Shadow Fey” is a legend, one I slowly digested over multiple months, because every single page herein had some idea, some spark that made me cackle with glee, a pervading sense of jamais-vu suffusingthe pages – more of it than in the whole catalogs of some companies. I have no doubt that this module will become one of the must-have-played pieces of Pathfinder with its complex sandboxy structure, its attention to details. Its inventiveness and its elegant, at times beautiful, at times creepy blending of themes serve to more perfectly evoke what being “fey” is all about, it redefines evil in the context of fey as a form of elitism that may very well be justified.

Even if I tried, I could have never conveyed the sheer scope and awesomeness of this module, cover all the ideas herein, short of copying about 90% of the module. This is the gold-standard of what an ambitious module should be like and while perhaps not recommended for novice DMs, this is  incredibly good – almost painfully so. And much like its unconventional ending that resounds so well with the theme of returning from the lands of the fey, turning the last page of this book left me with a sense of loss that it had ended, that there were not another 100 pages of shadow fey waiting for me. If I could, I’d rate this 6 stars. I got this book this year, so it will feature on my top 10 of 2013-list. It’s one of my favorite Open Design/Kobold Press-books released. It’s one of the best adventure-resources out there, either as module or setting and in scope, quality and detail on par with one of my all-time favorites, Coliseum Morpheuon. I’ll repeat it again: GET THIS. Even if you run Golarion, not Midgard. Want a break from Kingmaker? Get this. Run another setting? Get this. Don’t have a group and want a good read that is inspiring? Get this. Need ideas for fey tricks, hazards etc.? Get this. This is my unanimous recommendation towards anyone who even remotely is interested in the topic of fey: WHAT ARE YOU WAITING FOR? GET THIS! Final verdict? 5 stars +seal of approval – this might be the best thing Wolfgang Baur has written so far – I know I consider it the best one, and Ben McFarland has gone above and beyond to make this module work in PFRPG. When do we get the courtly intrigue handbook for mortal courts?

Well…have I mentioned in my review that you should own this? Not? Well, here’s the link to OBS!

(And if you prefer D&D 4th edition, here’s the link to that version!)