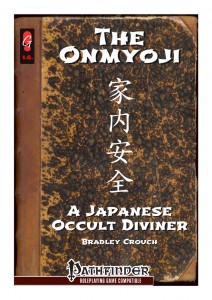 So what is the Onmyōji? Mechanically, we receive a 20-level base-class with 1/2 BAB-progression, good will-saves, d6, 4+Int skills per level, proficiency with simple weapons, kukri, double chicken saber, tonfa, monk’s spade and naginata as well as proficiency with shields. When wearing armor or shields the onmyōji is not proficient with, petitions increase their cost by +1 and talismans are reduced to 1/2 duration. Onmyōji begin play with a spirit pool equal to cha-mod, which grows to 12+cha-mod (+2 every 3 levels). They also start with 2 prayers known and scale that up to 11. At 2nd level, they have the first petition and scale that up by +1 every even level thereafter. It should also be noted that an onmyōji receives access to two cantrips/orisons that cna be changed as a new sequence of abilities added via the most recent update.

An onmyōji begins play with a shikigami, a kami bound to the onmyōji’s service in an origami paper vessel. If said shikigami dies, it can be replaced after 1 week for 200 gp per onmyōji level in an 8-hour ceremony. Shikigami are tiny constructs with d10 HD (and 1/2 HD-progression), a fixed Str of 6, 10 Int, Wis and Cha and a Dex-score that begins at 14 and sclaes up to 15 at 7th level and 16 at 15th level. The shikigami has 1/2 BAB-progression and no good save. It begins play with 2 skills (and has its own skill-list of class skills) and begins play with a feat, receiving another one at 5th level and every 4 levels thereafter. Sounds fragile? Well, while within 20 feet of the onmyōji that is its master, it receives the master’s Wisdom modifier as hardness. Additionally, while within this range, it grants the onmyōji bonuses as if a familiar. Its origami-form determines its natural attacks. It may also place talismans the master knows while within this range, drawing on the onmyōji’s resource, but using the shikigami’s HD rather than the class level to determine talisman duration. A shikigami can communicate with the master onmyōji and it has a spirit pool equal to its HD, but may only use these points to influence talismans it has placed itself. This short-range benefits increase by +5 ft at 2nd level further for every HD the shikigami has. At 5th level, the shikigami receives improved evasion. At 9th and 15th level, the shikigami receives more bonus hit points, counting as a larger-sized construct – which btw. are provided in a handy table. It should also be noted that the shikigami may now participate in the added cantrip/orison ability.

Now I mentioned the spirit pool – this can be utilized in a variety of ways: The onmyōji can extend the reach by 5 ft. per onmyōji level for the purposes of placing talismans for 1 round or extend the duration of an active talisman within 60 ft. by 5 rounds. He may extend the duration of ALL such talismans at 13th level. At 5th level, the onmyōji may increase the hardness of all active talismans within 60 ft. by wis-mod for 1 round and at 7th level, an o-fuda talisman’s radius within 60 ft. may be expanded by 5 ft (2 o-fuda talismans at 14th level). 11th level onmyōji may pay 2 spirit points for a +10 ft. radius-extension. (2 at 16th level)

All of these can be activated as swift actions. As an immediate action, the onmyōji of 11th level or higher may temporarily increase a talisman’s HP by wis-mod times 3. At 17th level, a spirit pool point can be used to make the next talisman not count against the daily allotment and 20th level onmyōji may treat o-fuda talismans as onamori talismans for the purpose of its prayer. Sounds confusing? Well wait a second and read on, it’s actually pretty simple and concisely presented in the pdf.

First, let me explain those talismans: Talismans are small tokens usually made of paper, cloth or wood, decorated with glyphs. An onmyōji begins play with 2 prayers and learns an additional one at 3rd level and every 2 levels thereafter. When placing a talisman, an onmyōji can choose a prayer that is compatible with the talisman-type and the onmyōji has to have a wis-score of at least 10 +1/2 the minimum level of the prayer’s level requirement. Talismans do not allow for saving throws and have a limited hardness equal to wis-mod, hp equal to class levels times 3. Destroying a talisman ends its effects; otherwise, it lasts for 3 rounds, +1 round for each class level. An onmyōji may deploy class level + wis-mod talismans per day. There are two types of talisman, first of which would be o-fuda. These generate their warding effects in a 10 ft.-radius upon being placed and canot be moved while placed, only destroyed. The second type would be the onamori – these are attached to creatures the onmyōji threatens, either voluntarily or via a touch attack. These only affect the creature to which they are attached. Failing to hit does NOT expend talisman-uses – nice!

Onmyōji of 2nd level and every 2 levels thereafter also learn a petition to the spirits. These are governed by Charisma, with a 10 +1/2 min level minimum requirement in the ability score analogue to the Wis-based talismans. Petitions have a DC of 10 + 1/2 class level + cha-mod.

The class comes with favored class options for the core-races, aasimar, drow, hobgoblins, kobolds, orcs, puddlings and tieflings – and they are interesting, actually – e.g. adding bleed damage to onamori is pretty interesting and fitting for half-orcs/orcs… Now, we also receive a significant array of onmyōji-feats – increased spirit pool-size, more petitions, reduced costs of a petition, gaining temporary spirit points when executing an ability chosen from the spirit pool’s options. Granting shikigami a bonus feat, granting shikigami the option to wear an item in the neck slot or increasing attributes of your shikigami/sharing an petition with your paper pet or increasing the size of a shikigami’s spirit pool/sharing the master’s level for onamori when close by…interesting. It should also be noted that the most recent update has introduced multiple limited-use spell-like ability-granting feats to add to the fray. Some of these new feats also are assigned as prerequisites for new petitions and the gifting of tricks, but more on petitions later.

Speaking of interesting – I love the idea of friendship-feats. These special feats are aligned with the 7 lucky gods of Japanese mythology, significantly increasing the potency of the petition aligned with said god. However, an onmyōji may only have ONE friendship-feat at a given time…so choose wisely your allies among the gods! Really like the fluff of these feats. Petitions essentially constitute the spells of the class, all coming with required levels (instead of petition-levels) and drawing from the same spirit pool resource. Conjuring force-damage dealing phantom legions, petitioning the scarecrow god Kuebiko for a divination – but one that only extends half an hour. Shields of temporary hit points, or a status-like effect based on heavenly bureaucrats – the petitions themselves are not only mechanically interesting, they also evoke a ridiculously awesome imagery and often come with quite an awesome narrative potential. Daikoku-ten, for example, may create mundane goods for you, but they do vanish upon executing the petition the next time… Raising the dead can also be achieved by petitioning Fukorokuju. Or perhaps you want to conjure forth a kami of the morning dew, which may explode upon the target receiving damage to douse the unfortunate in healing spray?

These petitions stand out due to two facts – for one, they provide Interjection games’ interesting knack for cool mechanics and nifty combo-potential. however, more so than in almost all IG-releases, these petitions also BREATHE the awesomeness of the extensive Japanese mythology and supplement the great rules with an imagery that is ridiculously evocative and steeped in lore. Everyone even remotely into Japanese mythology will have a field day here, grinning from ear to ear. Ever wanted to fly on ethereal cherry blossoms? Yeah. You read these and can immediately picture them – even in the cases where the mechanics are interesting, but not too special, it is the imagery that makes the petition awesome. For less romantic imagery, what about emitting a dread shriek of the dishonored and perished souls or unleashing Raijin’s thunderclap on foes? On the mechanical side, the most interesting petition herein essentially takes all the 1/day spell-like abilities granted and turns them into a pool, for more flexibility – nice!

Talismans should also not be neglected in my enumeration of options herein – they also come with minimum level restrictions and most prayers (but not all) can be used on either o-fuda or onamori. The onamori’s can be considered single-target effects, while the o-fuda, if used wisely, can make the onmyōji’s area-buffing absolutely unique and rewarding, allowing you to finally lure foes into your cleverly laid-out o-fuda traps. Guiding attacks, increasing the potency of the elements, increasing the healing of allies – all pretty cool and sporting mechanics that deviate enough from spellcasting to maintain the unique flavor of the class – what about e.g. granting allies the option to spit weaponized energy-based saliva? Temporary negating age-based penalties for the image of the venerable monk standing up and kicking badass butt? Yeah, I love these.

Editing and formatting are top-notch, I noticed no significant glitches. Layout adheres to Interjection Games’ printer-friendly 2-column standard and the pdf comes with a solid array of bookmarks. Artwork is a blend of traditional illustrations from mythology and even photographs for a surprisingly concise presentation that original artwork probably couldn’t have surpassed.

I’ve read and analyzed *A LOT* of Interjection games classes – and whenever I think I’ve seen all the tricks Bradley Crouch can come up, his creativity bubbles forth like a hot spring, creating something I did not expect. The onmyōji combines being a unique pet-class with a unique, yet easy to grasp spellcasting system and excellent enabler-capabilities for a class that is utterly, completely inspired. Not only is the crunch creative and unique, the class also breathes a rich mythology that adds the fluff-icing on the crunchy, perfect bacon of this class. I *adore* the onmyōji – it may be one of the best classes Bradley’s done so far and I sincerely hope we’ll see future expansions (the class has SO MUCH untapped potential beyond its glorious incarnation herein!) for the onmyōji. It is utterly unique and a must-buy addition to each campaign even remotely wildering in Japanese or Eastern mythology. This is one of the best 3pp-classes currently out there and well worth a final verdict of 5 stars + seal of approval and is a candidate for my Top ten of 2014.

You can get this awesome class here on OBS and here on d20pfsrd.com’s shop!

Do you like Brad’s designs? There currently is a KS running – VERY close to funding. Check out Bradley’s take on making bloodlines infinitely more interesting here!