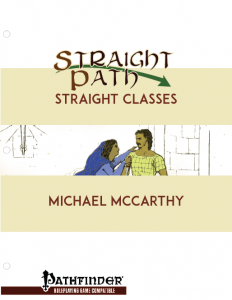 This supplement clocks in at 25 pages, 1 page front cover, 1 page editorial/ToC/intro, 1 page SRD, 1 page back cover, leaving us with 21 pages of content. The pdf comes with a second version, optimized for screen-use with e-readers. It employs a landscape layout and clocks in at 34 pages and is content-wise identical to the letter version to be printed out.

So, what is this? In short, this represents a quick and dirty rulebook for quicker character generation, condensing PFRPG’s classes down to 16. The book classifies characters in 3 rough categories: Martial characters, skilled characters and spellcasters. The focus of the book is to provide quick NPC-creation rules as well as an option for new players to learn the system. The books does that by first classifying abilities: “Always” abilities are, bingo, always on. “Anytime” abilities can be used as often as you’d like. Occasional abilities can be used once per minute (10 rounds) – this is perhaps one of my least favorite decisions made here, as it makes abilities work cooldown-based, which is pretty rare in PFRPG. Abilities classified as “With Preparation” can only be performed after a good night’s rest and once – spells are classified as “with preparation” abilities. These ability types are italicized when they show up in rules-text. While we’re on the subject of formatting: Abilities end with a full-stop, not with a colon here, which made me think of 5e more than PFRPG. That’s just cosmetic, though.

Gaining a feat or increasing an ability score by 1 is covered and we have synergy with Straight Skills as well, in case you’re using that pdf. Spellcasters prepare their spellslots ahead of time.

Skilled characters have 8 skills, d8 HD, get a feat at every odd level, ability score increases at 4th level and every 4 levels thereafter. Second and third attacks are gained at 7th and 15th level, respectively and we get ¾ BAB-progression as well as good Ref-saves. Skilled spellcasters prepare their spells and get spells of up to 6th level.

Spellcasters have 4 skills, d6 HD and get a feat at every odd level. (They are erroneously referred to as “martial characters” here. Slightly unwise: These characters are referred to as “Casters” in the rules-text, when their proper moniker is “spellcaster”, which should not provide issues per se, but is somewhat counterintuitive. Spellcasters obviously get spells of up to 9th level and get ½ BAB-progression, good Will-saves.

Now, based on these core chassis types, we take a look at the respective classes – Barbarian, Cavalier, Fighter, Monk, Paladin, Bard, Hunter, Inquisitor, Magus, Ranger, Rogue, Wizards, Sorcerers, Oracles, Druids and Clerics are covered. One highlight here would be the humorous tag-lines all of the classes get: The Ranger is, for example, noted as the “original murder-hobo”; barbarians note “anger-management not required.” It’s a small touch, but it makes reading the crunch-heavy pdf more fun.

Now, if you take a look at the classes, you’ll notice that they indeed are simpler: A barbarian’s berserker fury, for example, adds class level to atk and damage and gain DR of the same amount, but rage penalizes AC and Reflex saves by -4. Now, the abilities themselves are sometimes rather interesting – like getting twice the AC bonus from light armor. Mounts have ½ the rider’s hit points and share saves and AC, for example. Notice something? Yeah, this basically makes the classes, in a way, behave more like their 5e counterparts.

Now, the best way to think about this would be to picture it as an OSR-style hack for PFRPG; it still requires that you understand PFRPG. The pdf does not explain spellcasting and DCs, saves or rules-terminology like that – instead, it focuses on being a handy tool for quick and dirty gameplay. This does change quite a lot regarding the base assumptions: Bonus types, for example. Damage types are not really codified – the bonus damage for foregone iterative attacks is not specified, while a magus channeling energy into arcane strikes does distinguish between energy types. Sorcerer bloodline nets spells that can be cast anytime. (Chosen from what? The bloodline’s list? That of the sorcerer?) As you can glean from that, we have a different experience here – which is grafted onto PFRPG’s rules. There is an instance of infinite casting here, consequently, also infinite healing, which e.g. the oracle can yield occasionally. Provided, the spell was chosen for the mystery. Odd: Proficiencies are a bit weird: magi, for example explicitly get medium and heavy armor proficiency, while the other simple classes don’t specify the like.

The pdf also provides very brief notes on NPC-classes, with warrior, expert and adept fitting on one page with their tables, and commoners acting as fixed low-HP mooks. The animal companion of the druid, for example, is based, stat-wise, on the adept.

Editing and formatting are okay, I guess – there are a few minor hiccups on a formal leve, but the issue I have is with the rules-language. Layout adheres to a 2-column standard with yellowish tables and high-lights. The pdf has no interior artwork. The pdf is fully bookmarked for your convenience, though oddly martial and skilled characters get nested bookmarks and spellcasters don’t, which can be slightly confusing at first.

Michael McCarthy’s “Straight Classes” are a great idea per se. Simplifying class options is a smart move per se and can potentially be really handy for the GM and for newer players. Potentially. You see, they are contingent on knowing how a lot of PFRPG works, as the pdf’s classifying of abilities doesn’t really manage to denote the myriad of concepts that the draw upon. That means that you need at least an experienced GM to make proper use of them.

The pdf has another issue, namely that it attempts to divorce classes and their mechanics from the remainder of the game, which only works partially. Considering the intricately entwined rules of PFRPG, that should come as no surprise, but the interaction of the simplified options herein with the non-simplified ones is weird. Spellcasting, for example, requires that you know about action economy. At the same time, the iterative attack modification seems to be mostly divorced from it. The interactions between this pdf and PFRPG’s core rules generate a lot of issues and change in some instances the basic premises implied by the game – infinite spellcasting, to name but one.

Beyond this pretty big problem, we have issues in internal consistency – when DRs can diverge and energy types can, we’d need to distinguish between physical damage types as well, to name but one.

In short: This pdf doesn’t work because it labors under the misconception that the classes can be simplified as something divorced from the system as a whole, when, in truth, the modifications herein would require a discussion of action economy and a rewriting of spells, feats, etc. as well. Now, granted, this is billed as “quick and dirty,” but my contention is that it does not succeed at its goal. The interactions are so problematic that they make the gameplay rather opaque; to the point where I thought that I’d be better served with 5e or one of the OSR-games, who offer simplicity with precision.

Now, I consider a simplified Pathfinder and class-options like this a good idea; at the same time, this does not manage to blend its simplified rules well with PFRPG’s options. It can be used, yes, but it does generate a ton of rough patches regarding the more intricate components of the rules. As such, my final verdict cannot exceed 2 stars.