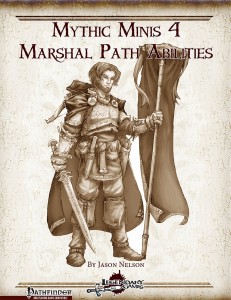 We kick these new abilities for the marshal path off with 3 new 1st tier abilities:

–Unbroken Will: React with +2 to atk and saves after being affected by intimidate or a mind-influencing effect. If the effect would penalize atk or saves, suspend these penalties for one round. Additionally, non-mythic characters that prompt this ability via intimidate/mind-influence are flat-footed in this one round against you, whereas mythic adversaries get a sense motive-check against your bluff. I assume that the bluff-check is a free action here. At 4th level, you can use mythic power to confer this ability to an ally  -does the marshal use the ability as it’s conferred or not? At 8th level, all allies within 30 foot may benefit from this for two uses of mythic power – the question remains: Is the ability retained by the marshal? I’m honestly not sure. Also: I don’t understand why the target is flat-footed against you for more than one attack.

We also get 3 3rd tier abilities:

-Conflicting Orders: When someone within 30 feet uses aid another, handle animal or a teamwork feat, you may negate this bonus as an immediate action. What about two characters acting at the same time using their teamwork feats? Does negating the benefit of one also cancel out the other? This works automatically for non-mythic creatures and those of a mythic tier below yours. You may also spend one use of mythic power to make a level-check versus caster level check (Why not against a fixed value? PFRPG usually uses a check versus fixed value mechanic, not competing d20-rolls…) to undermine the magical orders of charms/dominations etc. You may counter the orders of multiple creatures (mythic tier creatures) by expending 2 uses of mythic power. This second use of the ability should probably be a mind-influencing effect, which it as written, is not.

–Friendly Flanking: You always count as flanking when adjacent to an enemy with an ally, you don’t have to be on the opposite side of the enemy. Spend 1 use of mythic power to share this with 1/2 mythic tier allies for 1 minute. Rather powerful…I’m not 100% comfortable with this one – add squads of rogues = PAIN.

-Shatter Resistance: Spend mythic power as part of an attack to temporarily lower spell resistance by your mythic tier. Okay, I guess, but not that interesting.

We also get a 6th-level ability:

–Resurging Speech: Use Resurging Words as a full-round action. If you speak for 1 minute, you can remove the fatigued condition and may heal hit points instead of granting temporary hit points. When spending 10 minutes, you may instead remove the exhausted condition and heal damage as well as grant mythic tier+ cha-mod temporary hit points. This one is actually rather cool, making a per se weak 1st tier choice work better at higher levels.

Jason nelson delivers the second expansion of path-abilities – and while these are better than the ones the champion got, I am not 100% sold on quite a few of them and overall, there are wordings that could use some slight specification. that being said, this is by no means bad – hence my final verdict will clock in at a solid 3 stars. Solid, but not required.