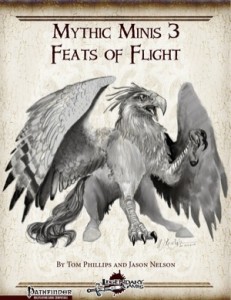 This pdf is 3 pages long – 1 page front cover, 1 page SRD/editorial, leaving us with 1 page of content detailing mythic feats of flight, so let’s take a look, shall we?

-Devastating Flyby (mythic): + mythic tier bonus damage on flyby attacks, also make drag, reposition or trip as a swift action with such an attack sans AoO with a bonus equal to your tier. When scoring a critical threat, expend one use of mythic power to automatically confirm the crit. Awesome – this makes flyby finally work in the iconic ways you’d expect!

-Flyby Attack (mythic): When making a flyby attack, you don’t provoke AoOs with your movement from the target. Expend one use of mythic power to move twice your fly speed during a round of a flyby attack. Nice!

-Hover (mythic): As a non-AoO-threatening standard action, use dirty trick on all corporeal foes within 60 feet when hovering, potentially blinding/dazzling/staggering foes temporarily. The duration can be extended by spending mythic power. AWESOME!

-Silent Soarer (mythic): Get no penalty to stealth when flying at normal speed, also get minor bonuses when hitting foes flat-footed. Alternatively, use mythic power to add your mythic tier to stealth for 1 hour. Neat!

-Stratospheric Soarer (mythic): Immunity to altitude sickness and environmental damage from cold. Also better attacks from above and use 2 uses of mythic power to sleep while flying. Cool!

-Wingover (mythic): Make 360° turns sans requiring a fly-check or movement. Get a bonus to acrobatics to move through threatened squares and spend 1 use of mythic power to combine wingover to make turns while charging. Yes!

-Wingstorm (mythic): As a full-round action, create gust of wind as an Ex-ability, with increased areas if you are larger. Spend mythic power to duplicate the mythic equivalent of the spell.

Editing and formatting are top-notch, I didn’t notice any glitches. Layout adheres to Legendary Games’ 2-column full color standard and the pdf has no bookmarks, but needs none.

Tom Phillips and Jason Nelson have hit the nail on the head here – the vast array of feats herein is killer, allowing you to duplicate all those cool tricks you know from literature – also, a dragon with these feats is simply awesomeness incarnate and so much closer to what dragons *SHOULD* be able to do – and beyond solid rules, these feats also breather the coolness and style mythic feats should come with – hence my final verdict will clock in at 5 stars + seal of approval.

You can get these cool mythic feats here on OBS and here on d20pfsrd.com’s shop.