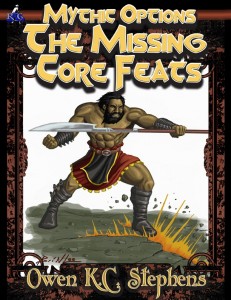 This pdf is 15 pages long, 1 page front cover, 1 page editorial/SRD, leaving us with 13 pages of content, so let’s take a look, shall we?

We kick off this pdf with a short fluffy introduction before explaining the intent of this pdf – simply put, it expands the mythic rules by providing all the mythic versions of feats from the core book that have not been covered in Mythic Adventures. Take for example the armor proficiency feats – their mythic equivalents allow you to add1/2 their AC-bonus to CMD and allow you to expend mythic power to add “it” to touch attack AC – whether that refers to the full AC-bonus or the halved AC-bonus, though, I’m not sure. The mythic version of agile maneuvers allows you to add both str and dex to calculate CMB. Mythic Combat Casting scales up its non-mythic brethren-feat’s bonus to +8 to concentration and you no longer lose the spell when failing the check. Additionally, ranged touch attack spells successfully cast defensively no longer incur an AoO.

The mythic crafting feats are interesting – for one, you may 1/day expend mythic power to accomplish 8 hours of work for an item you are creating – the items potentially just pop up, I guess since no duration, not even a standard action, is given. While that is a very minor issue in my book, brewing potions no longer limited by level cap is kind of awesome. Mythic Craft wands allows you to make wands sans charges that work 3/day instead of ones that have 50 charges, whereas crafters of rods may use constant or limited use items sans wearing them in the proper slot. Mythic Craft Wondrous Item deserves special mentioning, since it allows you to actually change the form of your item into another – though the boundaries there are thankfully fluff and left to the DM, e.g. changing items into ioun stones and the like becomes possible – though costly: Different shapes are more expensive, ioun stones adding a whopping +100% to the item’s price.

The mythic weapon proficiency-feats make iterative attacks be reduced by only 4 instead of the standard 5 and does not modify the amount of attacks granted, meaning the second attack is NOT gained at a reduced BAB of +5, but still at +6 as per the default rules. Okay, I guess, but nothing too exciting here. There is also a group of feats that essentially deals with extra-uses of limited per day abilities, adding additional uses per day and allowing you to expend mythic power when having expended the respective ability for the day to still use it, thus gaining additional channel energy/lay on hands/ki etc. uses.

On the saves-side, there are mythic versions of improved iron will/great fortitude/lightning reflexes that allow you to 1/day replace your save’s result with 20+ your will-save upon failing a given save, making for a nice last second save. Mythic Improved Two-weapon Fighting allows you to follow up successful AoOs with your primary weapon with your secondary weapon and also make attacks with both your primary and secondary weapon as a standard action. Does this means it’s stackable with vital strike? Vital Strike is per default an attack action (a standard action)  -if so, are both weapons modified with the benefits of vital strike? This is rather important, since the feat-chain for vital strike herein is rather insane, even for mythic rules – the improved version multiplies all damage, even that which is normally exempt from multiplication by the number of weapon damage dice and the greater version ignores hardness/energy resistance etc. Now if two weapon fighting can be combined with vital strike here, would the combined weapon damage dice of primary and secondary weapon be multiplied or would each weapon “only” get its own damage dice? As written, all damage dice used for one use of vital strike would be multiplied, which would lead to even more ridiculous amounts of damage…. On another side – Mythic Improved Two Weapon fighting has a bit of a weird discrepancy between BAB and mythic tier-prerequisites – BAB+6 and 5th tier feel a bit disjointed. Usually, one assumes roughly 1 mythic tier per 2 levels, which would either make this mythic tier 3rd or BAB +10. While the majority of feats herein adhere to aforementioned guidelines, here and there strange deviations like this can be found.

Metamagic feats also get a mythic overhaul  -maximize spell’s mythic brother amps up damage to 150% and allows you to cast the spell as its regular maximized version without having it prepared in advance thus by expending 2 uses of mythic power. Beyond rather obvious solutions like this, quicken spell allows you in its mythic incarnation to prepare any spell as a quickened spell and even cast those with specific numbers of targets as an AoO at the provoking adversary. What’s slightly odd would be Mythic Shield Master – while I can get behind getting AOOs from being missed or retaliatory AoOs, I’m a bit at a loss as to why the additional AoOs per round granted follow a strange curve – +1 AoO for bucklers, +2 AoOs for small shields, +3 AoOs for large shields…but only +1 AoO for a tower shield. The logic here seems to be larger shield=more AoOs; Not complaining about the feat, mind you, just not getting the logic why bucklers and tower shields are equally “bad” at granting additional AoOs –  Either +4 AoOs or +2 would make more sense to be. *shrugs* (That won’t feature in the final verdict, though!)

Remember the discrepancy I mentioned between BAB and mythic tier? The most obvious offenders would be the Xing-critical feats – Mythic Sickening Critical, just to name one, has a prereq of BAB+11 and mythic tier 2nd. Effect-wise, these btw. allow you to 1/round expend 1 use of mythic power to inflict the effects of the respective feat upon foes rather than dealing regular damage – but never more than one feat’s effects. Okay, I guess, but not that mind-blowing. Mythic Whirlwind attack is rather insane – One target eats your full attack in addition to your regular whirlwind attack, while with 2 uses of mythic power, you can full attack EVERY TARGET IN RANGE. Doesn’t sound so bad? Add class levels to a monster of colossal size, equip a reach weapon, watch everything DIE- especially since unlike its basic non-mythic version it does not come with the caveat that bonus or extra attacks are exempt from this whirling typhoon of death. BAB+4 and 5th mythic tier once again feel a bit disjointed.

Editing and formatting are very good, I did not notice any significant glitches. Layout adheres to an easy-to-read two-column full-color standard with okay artworks interspersed. The pdf comes fully bookmarked for your convenience.

Owen K.C. Stephens is a talented designer and provides a pdf here that is extremely helpful for mythic campaigns, one that adds quite a bit of options to the table and one that even has what one could consider ingenious options. Here and there. Honestly, not all mythic feats are that interesting and while well-crafted in Owen’s trademark thoroughness, here and there some potential issues have crept in – while I won’t indulge in the fallacy of assuming any type of coherent balance when it comes to mythic rules, some feats herein go a bit far for my tastes, even in the context of mythic adventures. Add to that the discrepancy in BAB/mythic tier with some feats and the none-too-cheap (though still justified) price-point and we arrive at a final verdict of 3.5 stars – and whether to round up or down ultimately depends on you: If what I’ve mentioned bugs you, round down, otherwise, round up. While as a person, I do round down, as a reviewer my rating adheres to in dubio pro reo and hence round up to 4.

You can get these immensely useful feats here on OBS and here on d20pfsrd.com’s shop!