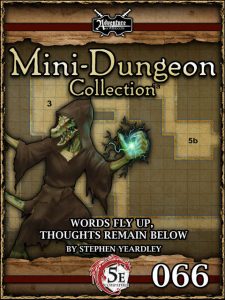 Okay, so what happens when a xhkarsh happens upon a bunch of kobolds currently fighting a drow antipaladin? Well, in this case, the creature managed to kill the drow and has since then whipped the kobolds into shape and recruited a cadre of diverse creatures under its banner. In the 5e-version, the emphasis on taking PCs alive has been removed, and it’s not the only thing: The table to randomly determine the placement of the adversaries herein has been eliminated as well. On the plus-side, we get the previously-mentioned Xhkarsh from tome of Beasts reprinted here and stats for a kobold chieftain as well. This is per se rather cool and indeed, the respective rooms sport tactics for the creatures that are most likely to be here. The presence of these tactics renders the complex rather dynamic, but brings me to the crucial issue here: You see, the dungeon has two levels, and one of them is 1 square left, two down of where it’s depicted on the map. There also are pipes and everything and the strategy of the adversaries is per se nice…but over the neat enemy set-up, the module forgot depicting the dungeon. The map doesn’t help there either, making the whole complex feel opaque and sterile and the 5e-version doesn’t really manage to remedy that.

Editing and formatting are very good, I noticed no significant glitches. Layout adheres to a beautiful 2-column full-color standard and the pdf comes sans bookmarks, but needs none at this length. Cartography is full color and this time falls a bit short of what we usually get, being more bare-bones than usual. Huge plus: We get a GM AND a Player-version of the area in which this takes place, providing full VTT-friendly compatibility.

Stephen Yeardley usually does much, much better. The two-level set-up is interesting, but suffers from the limitations of both wordcount and map-detail and the dungeon itself falls somewhat short of what it could easily have been. Try as I might, I can’t really recommend this one, in spite of its really cool premise – it feels like half a module and while the 5e-bonus critters are nice, the loss of the enemy placement table and less interesting monster-choices mean that Chris Harris’ conversion somewhat evens out when compared to the PFRPG-version. I strongly suggest you check out the other mini-dungeons penned by Stephen Yeardley, though – they tend to be amazing. For this one, though, my final verdict can’t exceed 2.5 stars, rounded down.