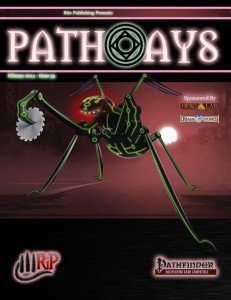 This installment of Rite free Pathways-e-zine is 40 pages long, 1 page front cover, 1 page ToC, 9 pages of advertisement and 1 page of SRD, leaving us with 28 pages of content, so let’s take a look!

After David Paul’s editorial gives us a run-down of the contents of this issue and the options contained herein, we are introduced to Steven D. Russell’s template for this issue, the Chine creature at CR +3. Essentially, these beings hail from worlds where science (and intelligent constructs) have started assimilating everything. Studded with a massive hardness of 20 and fast healing – which is a bit odd, since usually construct creatures (apart from animated objects) get a DR – possibly even DR/-, but rather rarely hardness. Oh well, it’s most an issue of nomenclature and does not impede functionality. Each Chine creature also gets an array of special abilities – a total of 16 ranging from blindsight to buzz saws and plasma tools are provided, adding more customization options. Worse, they come with electrical charges and wounds incurred from them can slowly turn you into a chine creature! On the downside, while they are highly resistant to energy, they lose all spellcasting prowess and supernatural aptitude and actually are rather susceptible to magic. The sample creature would be a mi-go at CR 9 – okay build. The artwork is okay, but nothing to write home about.

Liz Winters talks about using Realmswork and mastering in an interesting article and, as always, Raging Swan Press’ Creighton Broadhurst has a new creature as well – one surprisingly far-out for a Raging Swan-character, and one better off for it: We are introduced to Klar, the GNOLL SAMURAI (Ronin) at CR 5. Yeah. Good Gnoll Samurai. Awesome.

Recently, some of the cool unique races by Rite have seen some support in Pathways. This time, we get favored class options for the half elf/half ogre-magi Wyrd: A total of 17 alternate racial traits for the wyrd are provided. Unfortunately, I’m honestly not sold on all of them – take greater spell resistance, which replaces one of their late level slas with SR 11+char level; Not being able to lower this one may be rather…interesting, but since the main sources of healing no longer need to be spells or SLAs, I think it may end up a bit on the strong side. On the other hand, better withdrawing (not provoking AoOs from two squares rather than one) makes for an interesting idea. As a nice option, the favored class options also cover gladiator, hellion, luckbringer, malefactor, Vanguard and War Master as well as the UC-classes – neat to see the support!

Steven D. Russell also has a new bard archetype for us, the Grifter – a con-man/spin-doctor who may conceal information from others, veil enchantments into casual conversation etc. – Grifter can cause even speak with dead result in lies!  A smart, cool archetype that investigative players will loathe when used on an NPC… quite some story-telling potential here.

This issue’s interview is all about Purple Duck Games, as Mark Gedak, mastermind of Purple Duck Games and 4 Winds Fantasy Gaming explains some recent cool projects they have on their hands as well as providing some insights into their Porphyra-setting – be sure to check this interview out!

Finally, we get some reviews of 5-star files by Mark K. and yours truly.

Editing and formatting are good, though not as tight as some other Pathways -issues. I noticed a couple of obvious glitches that could have been prevented. Layout adheres to RuP’s 2-column full color standard and the pdf comes fully bookmarked for your convenience.

Over all, this installment of the Pathways e-zine is a solid offering with some nice love for the cool Wyrd-race, a neat template and a nice archetype – my favorite this time around, though, would be Creighton’s good gnoll samurai – far-out and cool, the character is sure to make an appearance in my game, also thanks to the nice full color illustration! This e-zine is free and hence, well worth your download, even if it’s not 100% perfect – in the end, I’ll settle on a final verdict of 4 stars with still a definite recommendation to download this asap.

You can get this nice e-zine for FREE here on OBS and here on d20pfsrd.com’s shop!