The Roots of Bitterness (NGR/OSR) 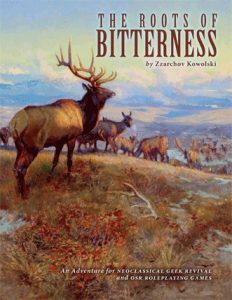 This module clocks in at 15 pages of content, already disregarding editorial, etc.

Structurally, the module organizes its material with colors – Orange denotes a hidden danger; Red the most obvious person/monster, Blue the most obvious detail, and green text denotes treasure. This color-coding is helpful. The module, as usual for Zzarchov Kowolski’s self-published modules, we get two rules systems – NGR (Neoclassical Geek Revival) and OSR – the latter not adhering to a specific system, instead noting movement, AC etc. in relation to other creatures/items, etc. – AC “as chain”, that sort of thing. I am not a fan of this, preferring proper adherence to a specific system, but I won’t penalize the book for that.

Thematically, we have a classic dark fantasy/horror wilderness module here, and structurally, the module is enhanced by one of Zzarchov Kowolski’s trademark wilderness encounter tables, where you roll d8, d6, and d4, the d8 denoting “Where”, the d6 “What” and the d4 the “Weird” component; doubles, triples and maximum values have special entries. If you’re familiar with the author’s other modules, you’ll know these types of table already, and realize how good these are when running a “lost in the wilderness”-type of situation, or just covering the party bumbling about. The module comes with a single spell presented for NGR and OSR, with the magic-user level in OSR and power/difficulty in NGR making sense for it.

Difficulty-wise, this is designated for level 1-2 characters, but OH BOY can this be deadly. Unless your players are super-hardcore/skilled, I strongly suggest going at least 2nd level with this. This module can theoretically TPK a group of much higher levels. If you think you can just murderhobo through this, you’ll die quicker in the finale than an thoroughly intoxicated non-gamer noob thrown into Anor Londo without having played Dark Souls before. The module can ONLY be solved by being smart, courtesy of its boss fight. There is no valid way to “rollplay” through this without dying.

…and I LOVE this module for it. The adventure’s success or failure is almost entirely contingent on, you know, actual ROLEplaying. Awesome. Note: There is a good chance that, even if the players do everything right, that one of them will die in the finale.

I know. You haven’t seen this module before, have you? Yeah, well, the adventure only was released as a special incentive for a few bundles of holding – and I don’t own it, so I can’t comment on it. How am I writing this review, then? Well, turns out that this was included in the limited edition hardcover “Zzarchov Kowolski’s Adventure Omnibus Vol.1” – which you can’t usually purchase either. Its KS has come and gone. HOWEVER, for a very brief timeframe, you can once more get this module, as the first adventure omnibus is available for purchase by supporting the kickstarter for the second book.

So yeah, there’s your window – it’s brief, but better than nothing.

As far as the location is concerned, we have a quasi-Russian steppe, with large herds of game (particularly elk) and ample water, but which is considered to be haunted nonetheless; a recent population boom has seen a local boyar “encourage” people to move here. That went as well as expected, and several caravans of settlers have vanished. Then the boyar sent Cossacks, but these fellows aren’t too keen on undignified work, such as bumbling about the wind-swept steppe. Enter the party, as they arrive at a poor encampment around a muddy pool…

All right, only GMs around? Great! Making their way through the poor and rather desolate encampment, the party can meet up with Fedor Chernov, leader of the Cossacks, who is willing to pay, as Cossack patrols have gone missing as well.

And indeed, as the party explores the steppe, they will soon realize that there are deadly threats about, if not from the carcasses of game, then from encounters: The naked, raving wild men attack with bone clubs, antler’s carved into stabbing implements and worse, and during the night, the few shrubs, small trees and trees of the steppe can animate and become deadly combatants, as though the very steppe wanted the party dead.

All aspects here blend together for some very clever environmental storytelling – the wild men seem to exclusively use elk bones and the like, which can be taken as a hint – something hates the animals. And indeed, there is an old entity here: At one point, this was no steppe; then wizards happened, and in their epic conflict, the region burned, fell – and only one tree elemental survived, witnessed how its wood would never regrow, thanks to the predation of the elk. And now, settlers are coming – and with them, more potential for herds. It can’t let that happen. Thus, the wild men, mentally broken, execute its orders under the direction of a wodewose alpha.

But how to stop an entity that can speak the language of leaves, is HD-wise far beyond the abilities of the party to deal with, that can possess any plantlife and make it attack? Being smart, that’s how.

The tree elemental’s lair is a small hillock, featuring a single tree stump and saplings, with claustrophobic tunnels underneath. Only halflings and similar small beings can use weapons that aren’t compact. Roots are EVERYWHERE, and beyond the niches where the wild men rest, there is the shrine, which contains the face of the tree elemental. Attack it…and you’re pretty much dead. While the tree elemental is possessing some other plant, it is “asleep” here, though – and that’s a chance. You see, in the ceiling, there is a well-concealed tunnel leading to the heart chamber. This tunnel is thorny, and climbing it while the elemental is awake means, well, you’re dead. Upstairs, there is a narcotic liquid (magical and potent, but very likely to knock you out…) and the wooden heart. Stabbing this with a metal weapon will kill it…in 1d4 rounds. Good luck surviving against the 13 + 13 HD monster and its 5d6+5 roots, though…

Or, you know…you could negotiate a truce between settlers and tree elemental. They’d have to promise a few things, you know, the usual, no herds, no tree felling, annual human sacrifice and that sort of thing, but that’d be a safe strategy, right? Well yeah, but then, the party would need to deal with the very pious Cossacks, who won’t tolerate paganism…

Editing and formatting are very good on a formal and rules-language level. Layout adheres to a two-column b/w-standard that uses color as helpful highlights, making the text easier to parse. The b/w-illustrations by Chris Huth are awesome and capture the tone of the module really well. The cartography of the final dungeon remains my biggest gripe here – we don’t get a player-friendly version sans labels, and the map lacks a scale.

Zzarchov Kowolski’s “The Roots of Bitterness” is a fantastic dark fantasy yarn that manages to be minimalist in scope, and yet impresses in almost every way. The wilderness engine performs as intended and familiar, but what sets this apart and elevates it beyond the delightful “Gnomes of Levnec” and other wilderness modules the author penned, is its focus on player skill and choice over rollplaying. This module can be won, but oh boy does it take experienced and clever players. This teaches, very well, to be attentive, to think, and conclude. The finale has zero room for error, and yet, it can be solved simply by brains. Heck, the stab that can “win” this adventure? It doesn’t even require an attack roll.

Add to that terrain components, and we have peak-level Zzarchov Kowolski here, executing a style honed and refined before in a nigh-perfect way. This module is not for the faint of heart, but oh BOY is it awesome. In fact, I had all modules in the adventure omnibus prior to getting it in print, because, well, I’m a sucker for print. Beyond my preference for the print medium, I consider this module to be sufficient to have made getting the omnibus worthwhile. Yep, that good.

If the above sounds like it’s up your alley, do yourself a favor and get the first adventure omnibus while you can. My final verdict? 5 stars + seal of approval. This also gets my “best of”-tag.

You can get this module for a very limited time – the kickstarter for the second adventure omnibus also has an option to get Vol.1 – and thus this module. Personally, I think the book is very much worth it. The kickstarter can be found here!

If you consider my reviews to be useful, please consider leaving a direct donation, or joining my patreon here. Thank you.