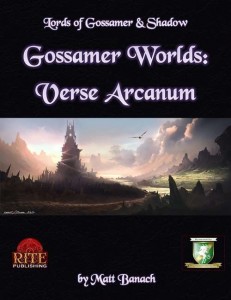 This installment of the Gossamer Worlds-series clocks in at 10 pages, 1 page front cover, 1 page editorial, leaving us with 8 pages of content, so let’s take a look!

So what is the Verse Arcanum? In one sentence, I’d describe it as “ye old fantasy setting” – elves, dwarves, magic galore, curses, prophecies and adventurers – fey and miles-long wyrms (true dragons in the most lethal, city-leveling sense…) and just about all other things and creatures you know from these settings can be found in this UNIVERSE (not just world!). Rainbow bridges? Check. Nasty Umbra-worshipping subterranean dwarves that specialize in unmaking magic? Check. Dual-natured elves that are at once light and dark elves? Yup.

Now of course, in the context of Lords of Gossamer and Shadows, the Verse Arcanum works differently – each Lord (or Lady) may erect one tower and said tower acts as his/her domain – no total control to be gained here. The influence of the tower and the respective ruler is felt via the demesne, or domain of said tower, in which the respective ruler controls the land. Now logically, this is not something most locals are keen on – and adventurers questing to take down the wizard’s tower, annoyingly self-righteous paladins…here’s the chance to hurl all those characters back at the players…

Beyond world trees containing whole worlds and civilizations, wizard academies and the like, the Verse Arcanum offers potential galore for a more meta approach to fantasy gaming.

Editing and formatting are top-notch, I didn’t notice any glitches. Layout adheres to Rite Publishing’s full-color two-column standard for LoGaS-supplements and the pdf comes with glorious, thematically fitting original pieces of artwork. The pdf comes excessively bookmarked, which is nice to see, even at such a short length!

Matt Banach’s Verse Arcanum is at once very conservative and one might argue, not as unique as some of his other creations. On the other hand, it could be seen as creative by its trope-inversion, by its essentially post-fantasy-gaming perspective on traditional fantasy tropes and as such, has quite some merit. Now one thing that personally didn’t wholyl gel with me would be the focus of this Gossamer World – it’s a universe, I get it. But why not devote a larger source book to it? The wyrms, for example, being the awesome beasts that they are, could have used some stats in the context of LoGaS and the dualistic nature of elves, dwarves etc. almost begs for an array of unique cantrips, spells etc. to learn. The tower defense angle is also rather awesome, but more concise effects on the demesne et al would have been awesome.

Don’t get me wrong, this is a great book, but it also is essentially a teaser-level pdf that can only go into so much detail for an idea that is slightly too much for the constraints of the pdf. Unlike other Gossamer Worlds, this is more about the twists on fantasy in the context of LoGaS, not about playing grounds, and it just doesn’t follow up on the ideas with proper effects.

Hence, my final verdict will clock in at 3.5 stars, rounded up to 4 due to the low price point and awesome production values.