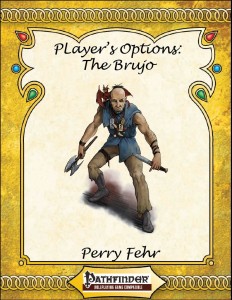 This pdf clocks in at 10 pages, 1 page front cover, 1 page editorial, ~2 pages of SRD, leaving us with ~7 pages of content for the new Brujo class, so let’s take a look!

The Brujo is a full caster who casts spontaneous arcane spells from the witch list via charisma, gets 1/2 BAB-progression, good will-saves, d6, 4+Int skills per level and they receive proficiency in simple weapons plus hand crossbow, hand axe, throwing axe, sap and short sword, but no proficiency in armors.

Brujo receive Eschew Materials as a bonus feat at first level and also have to be part of a cabal – direct harm within this cabal is forbidden, but other than that, roleplaying and creativity serve as the boundaries. Each cabal has an associated animal to which Brujo may talk as well as an ability that receives an upgrade at 9th and 18th level. Apart from one cabal, all cabals feature such a totem animal and an associated elemental weakness. As a weird design decision, several of these totems and their abilities requires the expenditure of curse points and the wording, while not bad, could have used a slight tightening here and there.

The aforementioned curse points come in a pool of 3+cha-mod points, +2 per every two levels. A Brujo may expend up to Brujo class levels curse points at once, and expend curse points once per round, but also during attacks of opportunity, which opens a can of worms – formal per round or from Brujo’s turn to turn? Don’t know and a minor clarification would help here. Via ranged touch attacks, Brujo may make so-called cursed strikes with a range of 30 ft. as a standard action or trigger cursed strikes as part of a melee attack as a swift action. If used at range, the target receives a save against 10 + 1/2 class level + cha modifier, in conjunction with melee attacks, there’s no save. The issue is – the ability fails to specify whether the melee attack has to hit regularly or versus touch attack AC. I do assume that the ranged use is not an option for AoOs as per the usual rules, but a minor clarification would be nice here as well. This is a nitpick, though, and will not influence the final verdict. Range is increased to 100 ft at 9th level and 400 ft. at 18th level.

The effect of such cursed strikes is a penalty to atk, AC or skill checks on a one for one basis. The issue is, I don’t have any idea how this works – does one curse point net the penalty to ALL of the three stats? Or would one have to pay 1 for atk-penalty, another point for a penalty to AC etc.? What about skill-checks – one point per skill? One point for all? Want to know about another massive issue with this class? It nowhere specifies how curse points are replenished. Daily? Resting? If foes fail saves? Don’t know. The central mechanic of the class doesn’t work as written.

2nd level Brujo receive either a familiar or an overpowered fetish – the fetish eats the first specifically targeted magic the Brujo is subjected to – utterly negating the effect. No choice, nothing. targeted healing? Eats it up. Disintegration versus a 2nd level Brujo? Eats it up. This ability improves over the levels, but the broken component is not fixed, it instead receives more daily uses. This quasi-immunity needs control and some level-scaling. They also learn to craft fetishes that provide protection against certain creature types and at 4th level, the Brujo learns to assume animal shapes (which is upgraded throughout the levels) and some spell-like abilities that thematically fit.

The 9 feats provide more curse points, transferring of spells to familiars etc. Alas, the issues have crept in here as well – take Familiar Spell – the feat refers to prepared spells, of which the Brujo has exactly zero. Or take the ability to add curses to spells – per se a good idea. Action-wise as a swift action, the ability fails to specify whether the target receives an additional save against the curse or not; whether AoE-spells apply to curse to all targets etc. – does not work as written. Sacrificing familiars to regain spell levels is an interesting last-ditch resort.

We also get a level 1 sample NPC Brujo.

Editing and formatting are okay, I didn’t notice any significant formal glitches. Layout adheres to PDG’s 2-column b/w-standard and the pdf comes fully bookmarked for your convenience.

Perry Fehr takes on a class that is okay in its concept – spontaneous caster with witch-list and cool fluff? Yeah, good idea. And this is one of THOSE classes. It *almost* works in almost every regard. Almost. Each of the basic abilities of the class has one flaw or another that actually renders it unusable as written. The Brujo is very close to working in a cool, concise manner, but as of yet, not one component of the class properly works. This one can easily work and a capable DM can finish the design-work sans any issues, but as written, RAW, this needs work. I’m confident this one will be revised and made a cool, working class, the rough edges filed off, but for now, I have to remain with a final verdict of 1.5 stars, rounded up to 2 by a margin.