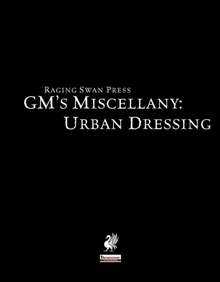 This massive compilation of Urban Dressing-content clocks in at 239 pages, 1 page front cover, 1 page advertisement, 1 page editorial, 2 pages of ToC, 1 page statblocks by CR, 1 page advice on how to read statblocks, 2 pages of author bios (yay for those – seriously, more books should have them to generate name recognition), 1 page SRD, 1 page back cover, leaving us with a massive 228 pages of content, so let’s take a look, shall we?

Okay, so this massive book contains the originally free tavern game Dragon and the Thief, So what’s it Called Anyway, So what’s for Sale, Anyway I +II, So what’s the Tavern Like, Anyway I+II, random Urban Encounters, Barroom Brawls (a pdf any DM should own!) and the Urban Dressings for Alleyways, Docks, Graveyards, Guildhalls, Market Stalls, Parks, Pirate Towns, Sages, Shrines, Temples, Theatres, Thieves, Traders & Craftsmen and The Watch. These all have in common that I’ve written reviews for them, which you can easily find by searching for the respective product. Since I don’t like repeating myself unduly, I won’t comment on these and instead dive right into what makes this book different from the sum of its parts, all right?

First of all – unlike some compilations of individual pdfs, this book does not simply cobble the material together – the organization is actually pretty smart: Need names? In the beginning of the book, we get all the composite name-generator tables for e.g. organizations, taverns etc., back to back.

The following organization is generally pretty alphabetical regarding the areas of the city – i.e. all the info for alleyways, then the info for docks (and docked ships), then graveyards (including weird characters and epitaphs), then guildhalls – you get the idea. Now generally, I think that Market Stalls would have been a great place to also position Traders and Craftsmen, followed by the “So what’s for sale…”-items, but that’s probably a matter of taste.

On the new content-side, we get two 100-entry tables on ruined buildings – both characteristics and appearance and general dressings and also a total of 20 complications for these buildings and 20 legends surrounding them – now don’t get wrong, these are glorious, but feel like they could have benefited from a Dungeon Dressing-style cheat-sheet of terrain hazards…you know the type one find also in the other Dressing-series by Raging Swan Press. We get the same amount of tables for statues and monuments, btw., though here the dressing-table is much more extensive and covers more than the small entries provided for ruins – instead of e.g. “Smashed in windows”, we get monuments that double as guard posts, some with starnge depressions etc. So in that regard – cooler here! (Also: Monuments don’t require a terrain-hazard cheat-sheet or the like, so no complaints here.) The appearances of Wizard’s Towers are also delightfully extravagant, and as such, the table fits only 50 long entries in the two pages devoted to it. However, 100 different dressing should provide ample modification for these, especially due to the rather eclectic selection provided. And if you’re starved for ideas, 20 hooks and complications and 20 legends, all adhering to this level of lovingly crafted detail, further add to the experience and variety.

Now I was not particularly kind to “Random Encounters: Urban” and so, Raging Swan has added additional ones to this book – the first of the new ones being “Fire Sale!”, in which a shopping trip to the alchemist results in a sudden fire and a bid to save the alchemist and keep the shop from blowing up – cool! The second new encounter would be all about a dormant, intelligent sword coming back to sentience when a hapless smith was supposed to modify it. Hilarity ensues. Awesome. An Imp-Oracle of fire and soot makes for an interesting info-broker/pyromaniac and investigating a case of vanishing corpses also makes for a nice diversion. Have I mentioned the dread encounter with the Boogeyman of the Alley, a lethal urban fey that is disturbing indeed? Or the encounter in which the PCs have to brave the unstable scaffolding of a church to make sure it’s properly renovated…and defeat the old gargoyle nesting there?

The new encounters have in common that they universally mop the floor with the original Random Urban Encounters and actually make for iconic playing experiences. SO kudos for these cool additions!

Now it should also be noted that the “So what’s for sale”-pdfs have been nicely collated and taverns, as one of the apexes of any self-respecting adventurer’s life, also have been collated- a rather good generator, followed by the sample taverns from installment II, with the barroom brawls thrown in for the mix makes for a nice piece of reference.

Editing and formatting are top-notch, I noticed next to no issues of concern – quite a feat for a book of this length. Layout adheres to raging Swan Press’ two-column b/w-standard with old-school b/w-artworks thrown in and mixed with thematically fitting stock art. The pdf comes extensively and fully bookmarked for your convenience and in two versions, with one optimized for screen use and one optimized to be printed out.

Okay, if you’ve been following my reviews, you know that the one Dressing-series that doesn’t routinely blow me away, is Urban Dressing. Far too often, the pdfs somewhat lost focus on what they wanted to be – a background dressing? A building generator? A selection of fluff-only NPCs? Now not all Urban Dressing-pdfs can be accused of a lack of focus, but quite a few can. It is my joy to report, that the new content provided for this compilation ranks among the best in the whole series, with especially the copious new encounters blowing the old ones out of the water and the handy tavern-compilation and organization making for one fine and often used component. Now that being said, when a component pdf has a lack of focus, it’s still here. The Theatre-tables, while expanded, still can’t decide on whether a sight or sound belongs on stage, the audience’s area or backstage etc. -a finer gradients for some of these tables would have made them more useful. the Installments dealing with criminals and watch are still rather rudimentary and not particularly inspired and so on.

On the other hand, we have simply evocative entries that, on their own, could spark whole adventures, exotic and inspiring sights and the spirit of wonder RaginG Swan Press’ dressings evoke more often than, all suffusing some of these tables and entries.

The organization of this book, in case that was lost on you, is superb and makes navigation exceedingly easy, though , due to some quirk, it doesn’t feel as exceedingly, superbly intuitive as the book on Wilderness Dressing, but I can’t fault it for that. The truth is, this book is the best compilation of the old urban dressing-series one could hope for – while the newer installments have brimmed with creativity and found their place, this book takes the older entries and whips them into a shape that is infinitely more useful than its component parts, both by refinement and organization and proximity. The new content is neat as well.

So how to rate this, then? See, this is where it becomes complicated – on the one hand, this book contains pdfs I consider rather subpar, whereas it on the other hand also provides some great new content and often-used classics that have seen ample successful use in our games. In the end, I consider this book to be exceedingly useful, but also short of the awesomeness that the Wilderness Dressing-book is – DMs looking for a way to make their cities more vivid – get this. My final verdict will clock in at 4.5 stars, rounded down to 4 for the purpose of this platform.

You can get this exceedingly useful toolkit here on OBS and here on d20pfsrd.com’s shop.