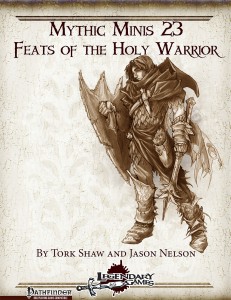 This Mythic Mini about tricks for divine champions provides 11 new mythic feats, so what do we get?

-Adept Champion: Activate as a free action instead of as a swift action, enhances CMB against targets of your smite. Okay.

-Dragonbane Aura: As a move action, grant allies within your aura 5 times mythic tier energy resistance for 1 round, but halved versus non-draconic (ex) and (su) abilities. Double resistance and increase duration to 1 minute by expending mythic power.

-Enforcer: Treat all attacks versus non-mythic foes as crits for the purpose of demoralize, confirmed crits increase the duration by mythic tier rounds and upgrade the effect to frightened, while following with damage dealt rounds as shaken. Not a fan here – this makes quite an array of high-CR non-mythic foes very susceptible to fear, with intimidate being pushable higher than the DC. It’s a problem of intimidate further enhanced by mythic rules. Might work for you, doesn’t for me.

-Greater Channel Smite: Activate as a free action, retain unused dice until they are expended. Usable only 1/round, but dice are stackable, though thankfully, carry-over dice are limited to a maximum of twice your mythic tier. Nice!

-Greater Shield Specialization:+ mythic tier to AC versus critical confirmations and use mythic power to negate criticals beyond the limit. Powerful, but cool since it makes shields more valid.

-Pure Faith: +1/2 mythic tier to save versus poisons, expend mythic power to neutralize poison on yourself.

-Shield Specialization: Gain a fortification-style ability equal to 5% x mythic tier. Solid and stacks. Like it!

-Swift Aid: Aid another for +3 as a swift action; Also: Freely distribute the +3 bonus and enhance the aid with mythic power for added oomph. I *really* like this one.

-Trick Riding: No more penalties in medium armor when riding, auto-succeed at checks of DC 20 or below and grant mount temporary hp via mythic power. Nice!

-Word of Healing: +10 ft times mythic tier range for lay on hands, no more halving AND may harm undead as well as heal the living. Okay, this one is a tad bit too strong in my book – it greatly enhances lay on hands, which isn’t something to take lightly in the first place and does a lot sans requiring mythic power.

Authors Tork Shaw and Jason Nelson deliver a neat array of mythic takes on feats that will not only benefit paladins and clerics – quite a few of these feats will have general applications as well. That being said, the feats themselves range from awesome to okay and while there is no true glitch to be found, the balance (and yes, even in mythic games, this exists) in some of these seems to me a bit off. In the end, I will thus settle on a final verdict of 4 stars – some gold, some slightly less awesome feats – a good installment.