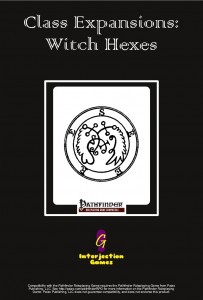 This pdf is 4 pages long, 1 page front cover, 1 page SRD, leaving us with two pages of content for new hexes for the witch-class, so let’s take a look!

The pdf kicks off with a hex that is very specific, but in line with mythology – it allows the witch to become a living bridge across a given gulf. Teh second hex is rather cool, allowing a witch to animate her broomstick as a scaling animated object. Also rather cool: Witches can attune themselves to the echoes of souls perished and be assaulted by their unfinished business (think Blackwell Games), helping her dealing with sinners. Witches may also gain a minor DR, shroud creatures against divinations by making the casters of divinations suffer from unpleasant visions or curse adversaries to need twice the amount of sleep.

Witches that dabble in herbalism may enhance their prowess when using the heal-skill and heal additional hp – but foraging/tools are required, making this especially useful for settled characters/NPCs. Witches may now also properly paint pentagrams to increase her caster level checks – for a price. Pyretechnics is a hex I’m not comfortable with: Rendering a witch at first immune to natural sources of fire and later gains even resistance to the element. The issue is: What constitutes natural fire? A forest fire? A chimney’s fire that engulfed a whole mansion? The rather ill-defined term means that I won’t consider this one for my campaign, though per se I like the fluff. Also: Not sure whether the intended pyre-resistance and cosmetic “burns” the witch gets are enough – what about the threat of suffocation from the rising fumes? At least in my game, pyres and burning areas have a real risk of suffocation…

There’s also a hex to curse the witch’s adversaries with increased surcharge and social penalties and a hex to tell fortune’s granting a 50-50-chance to  grant the target creature a bonus or penalty to its rolls. Taking on established witch-lore, witches may now  also survive longer when submerged and even breathe water and walk across it at higher levels. Iconic and cool – I really like it! Finally, there’s a hex to create zombies.

Editing and formatting are top-notch, I didn’t notice any significant typos or the like. Layout adheres to Interjection Games’ black-bordered, printer-friendly 2-column standard and the 1 piece of stock-art seal feels like it belongs to the pdf – nothing to complain. It should be noted that the pdf is excessively hyperlinked to d20pfsrd.com for your convenience. The pdf has no bookmarks, but needs none at this length.

The hexes herein vary in quality, but only slightly – generally, the concepts covered are solid and achieve with a solid grasp of the rules what they set out to do – even when it comes to more complex topics, which is a definite plus. While personally, I handle herbalism as per Necromancers of the Northwest’s stellar pdf, I can’t complain about this hex. Munchkins will have to look elsewhere, btw. – generally, the hexes are well-balanced and if in doubt, are rather on the lower end of the power-scale. While not all of the respective hexes are great or awesome, there are some herein that definitely make shelling out the fair asking-price well worth, though aforementioned pyretechnics-hex, while cool in concept, imho needs some clarification and thus costs the pdf some of its star-potential. In the end, I feel justified in rating this offering 4 stars – a solid buy for witches and especially if you want to represent some heretofore uncovered tropes in witch-lore, then this pdf will cover some of them.

Get these hexes here on OBS or here on d20pfsrd.com’s shop!