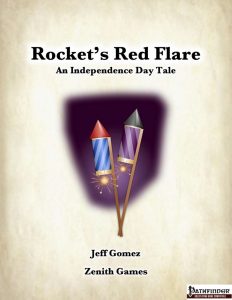 This little module clocks in at 12 pages, 1 page front cover, 1 page editorial, 1 page SRD, leaving us with 9 pages of content, so let’s take a look!

Okay, so beyond the adventure presented here, we do get pretty extensive rules for fireworks and their scoring; these rules begin with stating the different ways to create fireworks: Magic, alchemical mixture, magic powders or blast powders – all have skills etc. assigned. As for magical fireworks, up to two spells may be cast into a firework powder.

The scoring of a magical firework works as follows: The damage and effects of spells are treated as though they struck a 1 HD target and the target failed all saves. Randomized effects, miss chances, etc. are rolled. Area effects add +1 to the scoring process; if the fireworks cause conditions, these may also provide a bonus…or penalty. No one wants to look at a nauseating firework, right? Well, I’d honestly like to see one, but then again, I’m a weirdo. 😉 Damage dealt and/or healed are summed up, then divided by 5 and rounded down to the nearest half – this is a bonus. Certain descriptors can also yield bonuses: Fire, light and sonic are obvious, but e.g. force, mind-affecting etc. are also codified – these range from +2 to +1. Finally, schools and sub-schools and e.g. concealment or cover granting components are taken into account and the highest spell’s level is added. This section is pretty damn cool – it basically breaks down and codifies spells according to their potential to awe. The system is easy to grasp and nice.

The more conventional fireworks are skill-based, though repetition is the bane of a good score: The PCs should alternate between the different types. Don’t have any of the primary skills needed for firework shows? Fret not: The pdf offers a variety of suggestions to use other skills to improve fireworks, making sure it’s a team effort. Accompaniment with music can also help and the pdf even provides a variety of descriptions of fireworks for different scores. A simple selection of entries for crowd reactions complements what boils down to a really nice teamwork-based skill-challenge that may be worth the fair asking price of the supplement on its own.

All right, now let’s proceed to the actual module. It is intended for characters level 5 – 7and takes place in the village of Washingtown on the island of Murca. It has recently seceded from a tyrannical empire (after a poison-laced tea party) and declared independence….which is now celebrated, obviously. If that section did not put a grin on your face, well…it’ll happen. The pdf, unlike previous holiday-modules by Zenith Games, clearly designates read-aloud text as such. While e.g. DCs or names aren’t bolded for your convenience, the fireworks-scoring-rules mean anyways that you’ll have to read the entirety of the module prior to running it.

Last year, the half-elf Renedict Barnald, nicknamed Rocket, sold his soul to the forces of darkness for the ultimate display of fireworks. Upon completion, rocket was transformed into a fireworks elemental, who slew a lot of people, only to flee the scenery. The PCs are in town, one year later after these events, as the weirdly-dressed town elder Uncle Sam hires them to participate in the contest to ensure safety. The PCs get a proper workshop (Rocket’s former lab), and, as they explore Washingtown, they’ll realize that pretty much everyone carries a crossbow. “Never try to take a crossbow away from a Washingtownian.” The other teams competing would be the half-orcs, led by Samadam and the gnomes under the leadership of Bingimin Frinklin.

In the workshop, the PCs will only have 12 hours to prepare, but they’ll thankfully find a list noting the ingredients of Rocket’s special mixtures, which add to the score of the firework, big time. The first of these would be…Freedom Eagle droppings, which must be harvested in the vicinity of a nest. The magical beasts are fully stated (adults and eaglets) and they are, bingo, affected by a constant freedom of movement. Before you start yelling “Unamerican!”, killing freedom eagles is a bad idea, big time – they have nasty death curse, so non-lethal problem solution is preferred here.

The second ingredient can be found in the ruins of the nearby civilization of Biberty, where the desired moss grows near the feat of the Huge Statue of Biberty (CR 7) – once more, fleeing may well be prudent here. After getting these secret ingredients, the PCs get to prepare their show and compete with the other teams…and after that, the mighty Rocket’s Red Flare (CR 8) will crash down, attempting to steal the magical star-spangled banner. This potent item can be worn as a cape, granting freedom of movement, which may be activated as an immediate action. It also nets a +4 morale bonus to saves vs. fear (home of the brave, after all!) and even sports synergy with the cavalier’s banner-feature…but, well…retreat is never an option when you wear it. Cool item!

Conclusion:
Editing and formatting are very good, I noticed no serious hiccups. Layout adheres to a no-frills two-column standard of basically text; italicizations and bolded components have been properly implemented, and headers alternate, fittingly, between red and blue. The pdf has no bookmarks, which may constitute a minor comfort-detriment, though, at this length, I’m good with it. Artworks are public domain b/w-pieces. The module sports no maps, but doesn’t really need them.

Jeff Gomez’ “Rocket’s Red Flare” is by far the strongest of his three holiday-themed adventures. Structurally, we get a surprisingly deep firework-show engine that I will definitely use again; in contrast to the other modules, we have an emphasis on cooperation and tasks that don’t need to be resolved with combat. The boss is amazing and deadly…and the module is genuinely funny. It is a great little satire on American mentalities and peculiarities without being mean-spirited in any way – it is self-conscious in the best, most warm-hearted ways and a great example of self-reflection through the medium of RPGs. Now I can see die-hard Murica-above-else folks consider this module to be insulting, but frankly, it is so funny, enjoyable and, while it does sport satirical jabs here and there, they are in the tradition of Horaz, not Juvenal, attempting to cause reflection instead of tearing down the target. Now, while I am not an American, I know that many of my readers are and, from what I could glean, I am pretty positive that this may well be even funnier for Americans.

Even if you’re not interested in the module at all, the firework rules may well make this module worth getting, considering the low asking price. My final verdict will clock in at 5 stars + seal of approval, for a genuinely funny module that lacks the dark cynicism of the previous two adventures.

You can get this hilarious module (and the cool associated firework-contest rules) here on OBS!