Where there’s a Will (5e) (priority review) 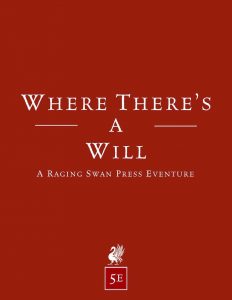 The second scene, then, would be about the deceased pirate getting a funeral of sorts at Traitor’s Gate (see A Day Out at the Executions); here, 6 exceedingly detailed NPC writeups are presented, alongside with a bit of read-aloud text, mannerisms, background, distinguishing features, and notes for interaction with the party. Cool per se, and system-immanently, the eventure works better in 5e than in all other systems. Why? Because it uses the default NPC stats of 5e in its NPCs, which does mean that you have concrete rules for social skills and combat to fall back on if required.

Part 3, then, would essentially be the reading of the Will in a shady pirate’s bar, so whether or not the party actually is there will depend on the morals of your group. The tavern is not mapped, and there is an additional NPC for further complications here. The celebration itself, somewhat to my chagrin, is also bereft of rules – even though knife-throwing, drinking etc. all can easily be gamified without spending a lot of words. The “notary” does hand out maps, and then offers a quest of sort – for a legendary artifact, which, yep, does not come with stats. (Though, if you do have the 3.X-book Elder Evils, you’ll have a good idea for an end-game for it…) Much to my chagrin, the important parts, the celebration itself and the reading of the will, are totally glossed over. The latter, very volatile situation, is even relegated to a single paragraph. No, I am not kidding you. No if/then, no details…it was a serious downer for me. Heck, picture it: a proper tavern, highly volatile situation, lots of booze…it wouldn’t have been hard to devise some proper rules, perhaps even a lair action or two. *sigh*

But the execution? It left me rather disappointed. The eventure spends a lot of time on a plethora of NPCs in Part II, and then misses actually making the capstone of the show, the will itself, interesting. Sure, the web of personalities is neat to see, but combined with the lack of concrete rules, the result of this eventure is that it feels like a very long and detailed adventure hook, not like a social adventure in and off itself.

As presented, this eventure felt like a let-down to me. In 5e, it works slightly better than in the other systems it has been presented for; taking that into account, combined with the author’s indubitable skill and the low and fair price point that my final verdict will clock in at 3.5 stars. But I’ve thought long and hard…and frankly, I can’t justify rounding up for this one.

If you have a copper to spare, I’d appreciate a tip via paypal, or joining my patreon.