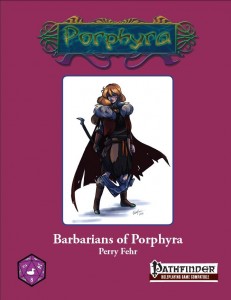 This supplement clocks in at 13 pages, 1 page front cover, 2 pages of SRD, leaving us with 10 pages of content, so let’s take a look!

After a short paragraph of prose and introductory text, we are introduced to the first archetype, the Hound of Heaven (primarily intended for the Avoodim-race). These guys MUST be lawful good (a diversion from the usual barbarian alignment restriction) and get the ability to become more deadly versus people whose tracks they identified in lieu of rage powers – which is a very bad trade-off, even when taking the potential paladin/monk mullticlassing into account. Furthermore, the ability mentions “quarry” a lot – which is unfortunate, for there already is such an ability and I’m honestly not sure whether the two can potentially be combined or count as another for prerequisites etc. A slightly wonky wording here that can easily be remedied, even if not being problematic to the extent of ruining the archetype.

The yeti-like Ith’n Ya’roo may opt to become Ice Champions, who become particularly adept at using bone weapons and bringing down beasts bigger than they are – I *assume* this refers to the beast monster type, but I’m not 100% sure – Applying the bonus to damage granted to all foes that are bigger wouldn’t hurt this one. The exceedingly cool Erkunae may opt for the Madblade archetype and must take the chaos pact when choosing their racial pact. The use wis as governing attribute for rage, increase their DR and may sniff out followers of law. Nice one.

The human Polar Berserker, are tougher, speak giant and gain endure elements. Boring filler if there ever was one. The Wyrmheart for the cool Dragonblooded race may funnel rage into a breath weapon akin to a dragon blooded sorceror (called draconian – when it should refer to “draconic” – but I’m nitpicky here…) and words the usual save-DC formula in words. High-level reptilian telepathy is nice, but still – the damage of the breath doesn’t really rock my world. Not sold on this one either.

We also get 5 new feats – and we get a fail at the very beginning: Elemental Purification: “If you take damage from an energy type that you have resistance to, you gain a round of rage for every increment of that resistance amount.”A) There’s a mistake in the example that is supposed to explain how the feat works. B) What is an “increment” here? Resistance 5? Resistance 10? C) This makes it possible to easily recharge rage. Rage-out? Hold your hands in a torch. This feat is utterly broken and needs to die. The same goes for Fury Knives – add int-bonus as well as str-bonus to damage when two-weapon fighting AND add a further +2 when wielding the same type of weapon in 2 hands. So…beyond the obvious, much too high damage boost…what about double weapons? Broken. Sand screamer is different – 1/day as a swift action, grant yourself unused rage-rounds as DR. It does not specify which type of damage reduction, though. It does specify it does not stack with other DR, making it at higher levels not particularly useful. Needs better scaling. Faster death attack for barbarian/assassin-cross classes (just 2 rounds of study) is fine by me, as is increased movement when on slippery floor like ice, glass or grease. Neat one.

We also get 5 new rage powers – reducing the first point of mental attribute damage per atatck, healing yourself by expending rage, using stealth while in rage – these are neat. The two One-Vow powers are problematic, though – 1/day, while raging, the barbarian may add unused rage rounds as point-for-point to atk or damage, depending on the type. Now atk has to have the bonus divided between multiple attacks, but I’m not sure whether the damage power applies it to all attacks or one – both lack a duration. Beyond that problem, I’m not sure whether these powers expend the unused rounds of rage or not – the wording ought to specify that.

Now Perry Fehr’s biggest strength as an author has in my opinion always been his knack for crafting great ethnicities and cultures and we actually get two fully detailed cultures – the B’nai, a schism of the godless Zendiqi. (Which are AWESOME!) and come with flavor-dripping taboos, a grand story and dietary restrictions, information on their 6 tribes and an alternate class feature that replaces trap sense in favor of better saves against magic for their barbarians. Glorious entry! The second entry on the Sikayanoi is no less compelling – weird humans tending to being pale and towards albinism, these guys increase their miss-chance slightly whenever they receive it and have a much easier time stabilizing. Have I mentioned that the tribal and warrior traditions here are also depicted? No complaints here either – this tribe is glorious.

Beyond that, Josh McCrowell’s Rune Magic gets a nice nod, with the archetype of the Rune Drummer that wilders in the exceedingly cool bloodrunes – the archetype has a special rune drum that replaces blood lust with a rage-like power and the new bloodrunes provided are nice. We close the pdf with 4 new weapons as well as the items reindeer-blades (for reindeer-drawn one-man sleds) and wind sleighs – though the latter alas does not get vehicle-stats. We also get a sample CR 11 polar berserker barbarian.

Editing and formatting, on the formal side, are good – on the mechanical side, not so much. Layout adheres to Purple Duck Games’ two-column standard and is rather printer-friendly. The pdf comes massively bookmarked with copious, nested bookmarks.

Oh boy, this pdf is heaven and hell – on the one hand, the archetypes are mostly lame and problematic, the feats are broken and the mechanic issues extend to the rage powers as well. It’s a pity, really, for some of these ideas behind the pieces of crunch can be often considered awesome. I was honestly getting ready to trash the living hell out of this when the new ethnicities came up .and, what can I say – they are glorious. The same holds true for the ideas behind the items and I the bloodrune using archetype shows that Perry Fehr CAN write a nice archetype. Whether you can get anything out of this pdf depends completely on what you’re looking for – the crunch simply isn’t up to snuff, but the fluff is just as glorious as the crunch is flawed. This book, honestly, felt to me like the book had this glorious idea for cultures and then just cobbled some lackluster crunch to supplement it. If you’re getting this for the fluff only, then this book is still a great read, but if you’re looking for good crunch, you’ll be disappointed. Were the fluff not that good, I’d bash this even further. As provided, I can’t go any higher than 2.5 stars, rounded down to 2, even when taking the more than fair price and great fluff into account.