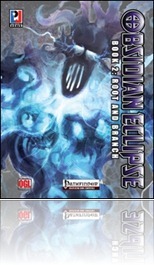 This adventure/sourcebook from Louis Porter Design is 27 pages long, 1 page front cover, 1 page editorial/SRD, 1 page ToC, 3 pages of advertisements, leaving 21 pages of content, so let’s check this installment of Obsidian Eclipse out, shall we?

Where the first installment of Obsidian Eclipse covered the fate of halflings in the Obsidian Twilight setting, this book focuses rather on the fate of the elves, to be more precise, the myconian elves. Their home, once the lush, biggest forest of Abaddon, has been hit hard by the cataclysm and is decaying and changing and so are the elves – while some of their dwelling-trees remain, they are dying or changing, as are their dwellers. Elves have started to become more akin to the aberrant, fungoid nature of their forests, distant and alien. Thus, this gazetteer-section provides some interesting adventure hooks and the settlements presented ooze creativity and make for compelling locations, not only in Abaddon. After the rather well-written section, we are introduced to new rules:

2 new templates are provided (both CR +1), the fungal horror and the slime horror, both making for creatures that have been changed by their strange surroundings. I liked these templates, although their formatting is not uniform and both feature some editing glitches. They can be used as written, though: Just be ready to e.g. substitute HD for character level when calculating the DC for the Spore Cloud of the Fungal Horror. It should also be mentioned that some of the special abilities don’t use the standard PFRPG-way of calculating save-DCs with attribute modifiers. It is also here (or at the very latest, in the following Myconian Elf Bandit (CR 1) statblock that you’ll realize that this pdf has had no editing or formatting to speak of. The Razor Moth swarm (CR 3) and the stump horror (CR 4) make for interesting creatures, although the Razored Wings special ability of the swarm is rather mysterious with regards to its bleed damage – is the damage of bleed cumulative per hit by the swarm? Does it stop once the space of the swarm is left by the bleeding PC? And why can the stump horror secrete poison (making it a cool ambush predator), but does not add the poison to its attacks?

We also get 4 feats, primarily for myconian elves, granting them alien properties like bioluminescent or toxic skin or even the ability to channel the eerie stillness of the dead forests, making you an extremely stealthy predator. Three new spells are provided as well, dealing with foulness, spore clouds and the creation of sucking bogs.

Next up is the adventure section, thus here we get SPOILERS. Potential players beware and jump to the conclusion!

“Root & Branches” has the PCs contacted by a renegade harrowed officer of undead armies, who wants them to provide the movements of said army to rebels so they can target the supply routes and scavenge goods, weakening the army and strengthening the revolutionaries. In order to hand over the message, though, the PCs have to brave the depths of the forest. The adventure is a mostly free-form narrative, that has the adventurers ambushed by some myconian elf bandits and stumble across a now abandoned temple of the elves, which has been corrupted and now serves as the home of slimy and fungal creatures. A simple b/w-map is provided of the temple. Once they have explored the temple and delivered the message, this short adventure is essentially over, the rest for the DM to develop. The Harrowed double agent and all the NPCs/monsters get their statblocks.

The pdf closes with providing two new types of armour, two new diseases and 8 aptly-written environmental hazards to the DM-roster of woodland complications.

Layout is nice and adheres to the 2-column standard, the pdf has no bookmarks. Oh dear, oh why. Editing and formatting is not bad, it’s abysmal. Not one statblock in this pdf does not have formatting glitches: Every combination of the letters “D” and “R” is bold and in capital letters, the attribute modifiers are not in brackets, some of the statblocks use the Obsidian Twilight-font for their sections like “offense”, but not all. Nor is the font used cohesively within one statblock. Extraordinary/supernatural qualities are not labelled as such and some of the ability-wordings could have been clearer. Add to that the fact that the abilities of the creatures not necessarily make coherent sense in itself and we’re in for a mess. Other examples include unnecessary breaks in feat-sections, commas at the beginning of a line, bold lines that shouldn’t be bold, non-bold lines that should be bold etc.

The dungeon that constitutes a large part of the adventure is actually periphery and could easily be left lying by the road by the PCs. On the other hand, the environmental hazards and gazetteer-section are top-notch and make for an excellent read, proof that Obsidian Twilight is rife with potential. Potential marred severely by what can only be called a terribly sloppy job at editing and formatting that severely limits the appeal of this pdf. The adventure is very run-of-the-mill and feels more like a collection of random, unrelated encounters. Were it not for the exciting ides herein that deserve better, I’d go 1 star on this file. As written, my final verdict will be 1.5 stars, which is a terrible pity, as this installment of Obsidian Eclipse could have easily been 4 or even 5 stars.

Obsidian Eclipse Book 2: Root and Branch is available from: