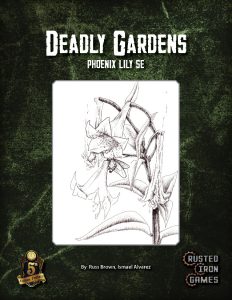 The 5e-conversion of the Phoenix Lily clocks in at 5 pages, 1 page front cover, 1/2 page SRD/editorial, leaving us with 3.5 pages of content, so let’s take a look!

After a brief introduction to the subject matter at hand, we are introduced to two magic items: The uncommon specimen jar, which conserves 1/2 cubic foot of material, preserving it. (Yes, including information on putting things inside or drawing forth items.) and the second being the very rare fecund totem: Vegetation within 600 feet of the totem becomes overgrown as if affected by plant growth, which is btw. not italicized in the pdf. The totem also grants all plant creatures +2 hit points per HD, +2 to all rolls and +2 to AC. Creatures marked by the sign on the totem are not attacked by plants unless provoked.

The eponymous sample creature herein, the Phoenix Lily, is a CR 4 adversary that sports a limited number of fiery blossoms that wilt upon being used, which they can use to emit fiery rays with a recharge of 3-6 (I assume, the recharge here represents a wilted blossom regaining its prowess). These lilies are vulnerable to cold and resistant to fire and may either attack twice via vines or fiery one of aforementioned rays. Interesting: Upon taking fire damage, a phoenix lily must succeed a Constitution save, with a DC equal to damage taken. On a failure, it erupts in an explosion akin to a fireball, with a damage equal to number of blossoms remaining times d6, Dexterity save vs. DC 15 halves. The plant is included in the targets and all blossoms wilt if this explosion is triggered. On a cosmetic side – the rules pertaining recharge and the wilting of blossoms are a bit opaque: Now I *think* wilting blossoms represent the total maximum of times the phoenix lily can fire its ray, while recharge is determined to denote the downtime required between shots – but one may just as well read this as recharge “unwilting” blossoms – hey, it’s a phoenix lily, after all! A bit more precision in the interaction of these two would be nice.

The pdf also provides concise rules for harvesting phoenix blossoms that adhere to the default established in the accompanying FREE pdf and the rules for preserving them are provided as well – though the ever increasing DC means you won’t be carrying a lot of these around for long. Intelligence (nature) can be used to fire them similarly to a one-use circlet of blasting. The pdf also contains rules for glow-emitting fire beetle glands and basilisk blood, which may revert creatures affected by a basilisk’s petrification to their less statuesque forms and, when imbibed, can act similarly to cockatrice tongues as a means to temporarily gain advantage versus paralysis and petrification. Shambler Wafers are pretty powerful: Eating one grants you lightning immunity for one hour and converts the first time lightning damage is taken up to 20 hit points of damage prevented by the immunity into temporary hit points. At 200 gp, this item may be a bit on the inexpensive side, but its harvesting is dangerous enough…so yeah.

The pdf also provides means for using basilisk blood and phoenix blossoms as optional additional material components – and the modifications are interesting: E.g. gaining advantage to remove the petrified condition via dispel magic – or rather, that would be interesting…but, alas, pretrification requires greater restoration to remedy and can’t be affected by dispel magic in the first place. Editing has some glitches here – when scorching ray notes “You get one extra ray than normal.” and a multiplying “X” is missing in a spell’s area increase, the bonus damage granted to phoenix lily-powered fireballs is not properly codified as fire damage, lack of italicization of a spell…I can’t help but find myself thinking that editing should have caught this.

Editing and formatting are the downsides of this pdf – while formally not bad, they could have used a cleaning up pertaining some components of the rules-language. Layout adheres to an easy-to-read, nice 2-column standard that is easy on the printer. Oddly, one underline of the natural items is purple, not black like the others. The original b/w-artwork provided is awesome for the low price point. The pdf comes fully bookmarked for your convenience.

Russ Brown and Ismael Alvarez’ conversion of the Phoenix Lily to 5e is solid regarding the creature – while the recharge/wilting-component imho needs clarification, the creature as such is well-crafted and fun. The supplemental material, alas, ranges in quality, with editing feeling rushed on a formal and rules level – basically, this is a nice, inexpensive pdf hampered by the glitches in the details. If you just want to get this for the creature, go ahead; similarly, I enjoyed the notion of basilisk’s blood being used to reverse petrification caused by them, as this taps into mythology. Still, the power component-section in particular needs some work. Still, for the plant, this is worth the asking price.

As a reviewer, though, I can’t close my eyes to the hiccups herein. My final verdict, hence, will clock in at 3.5 stars, though I can’t round up with the accumulated glitches in this brief pdf.