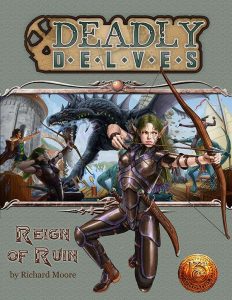 This module from Jon Brazer Enterprise’s „Deadly Delve“-series for experienced groups clocks in at 34 pages, 1 page front cover, 1 page editorial, 1 page SRD, 1 page back cover, leaving us with 30 pages of content. It should be noted that the extra-pdf that contains properly-sized, big versions of the maps is not included in the 13th Age-version.

A big plus for fans of 13th Age would undoubtedly be the inclusion of notes on how the respective icons and Nyrionaxys II’s agenda interact, providing some proper contextualization for that aspect of the game. This level of attention to detail also is represented by a sidebar talking about creature sizes and their more abstract meaning in 13th Age.

Still, this leaves the PCs without much recourse – they need to stop the black dragon, asap! Thus, they venture deeper into the marshlands towards the temple of the Ixtupi. Tsiikil lizardfolk can provide support and directions, should the PCs help them. The temple of the Ixtupi is a foul stone pyramid surrounded by a great moat – to even get to it, the PCs will need to deal with potent, dragonblooded lizardfolk; the presence of stormwyts, an alkaline-spit-using wyvern-variant adds a further danger – and woe if the PCs start using elemental magics: The taint of the place causes such magic to spawn tainted elemental spirits. Here would be a good job to comment on the 13th Age stats – the book does a rather good job at converting to the system – from creature-type classification to internal consistency, the creatures presented make sense – when something should have a draconic ability like resist acid 16+, it does. Both natural even and uneven hits, damage types, etc. can be found in the respective entries and builds of the adversaries encountered. Some of the critters also make good use of the escalation die, which is another mechanical big plus.

Breaching the temple is already a feat in and of itself – but exploring the dungeon will not be simple, either: Here, Ixtupi priests, mud-caked lizardfolk zombies, mummies and spirits, kobold trappers and even a dire venus flytrap, stand between the PCs and progress – but to reach further below, the PCs have to pass the mosaic pillar chamber – where multiple unique beasts spring forth from the pillar…and that’s before the traps, which make this transitional area a really nice gauntlet. As a minor complaint regarding design aesthetics – while the optional cover rules covered are nice, terrain-wise, the adventure could be a bit more dynamic in 13th Age – you can tie cool effects to the escalation die…but that’s just me complaining at a high level.

The bulk of Ixtupi resistance can be encountered in the lower temple – here, the most potent of the tribe await – alongside glass golems, demons, evil idols boosting the foes of the PCs…and even a half-dragon gynosphinx – and yes, she comes with sample riddles. Ultimately, past all the traps, the PCs will have to delve deep into the place where caustic water and grueling sights await and face Nyrionaxys II…if they don’t fall prey to the hatchling ghosts of her brood mates or the half-draconic anaconda. Or the stormwyts…and yes, all of this doesn’t sound so bad, right? Well, here is a big difference to almost all adventures featuring dragons: Nyrionaxys II doesn’t wait to be slain. A full page is devoted to tactics of the mighty dragon – and no, she is not a simple black dragon; she actually has more than 300 hp, making her less prone to being killed off too quickly, an issue that dragons in 13th Age tend to have.

Big plus, btw.: Instead of focusing just on treasure, the conclusion-section here talks about the repercussions for the champion tier into which the PCs undoubtedly have ascended at the end of this module.

Editing and formatting are very good. I noticed no serious accumulations of either formal or rules-language glitches in the module. Layout adheres to a really nice two-color full-color standard and the pdf comes fully bookmarked with nested bookmarks for your convenience. The maps featured for all major sites are solid and full-color. The 13th Age-version of the module, as per the writing of this review, did lack the player-map bonus pdf, which makes that aspect a comfort detriment. The 13th Age-version comes with a second, more printer-friendly version with a white background. Artwork deserves special mention: The module sports a couple of really nice full-color artworks.

Richard Moore’s “Reign of Ruin” was an honest surprise to me: You see, there are two basic dragon-module set-ups (not counting random encounter dragons): The long, epic one, wherein you defeat a dragon at the end, after much hardship, and with the exact goal of defeating the draconic threat; and the briefer one, where a dragon at the end is basically the boss. The first tends to be represented by mega-adventures, campaigns, etc.; the second by smaller modules. Both have one thing in common: Most of the time, the dragons in them are DUMB, character-less engines of destruction, when ostensibly, they are supposed to be really smart. This module, thankfully, gets that aspect right: The dragon herein is an interesting character, embedded in a dungeon and social environment with an interesting leitmotif; she makes sense. Her proactive strategies can allow the GM to unleash hell upon the PCs and vanquishing her doesn’t break ongoing campaigns. The 13th Age conversion of the module has been handled with care and is well-crafted.

In short: While this does not reinvent the wheel, it’s one of the few anti-dragon modules that did not cause my brain to hurt at one point – and that’s a big, big plus. The well-done mechanics help as well, which is why my final verdict will clock in at 4.5 stars – though I have to round down for the purpose of this platform.

You can get this well-made 13th Age-module here on OBS!