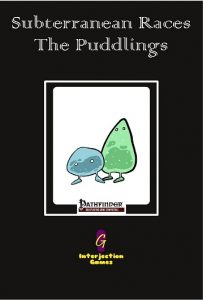 It is by now a tested trope that even gods may die in fantasy gaming – and where death is a possibility, one should not be surprised to see the concept of the divine assassin – whether in the guise of a Red Mantis of a psychotic killer. The assumption of this book is that there at least once was a divine assassin (perhaps a predecessor?) that has failed. When the divine assassin was sent to destroy Aggranius, lord of facets, the deity was prepared and rendered his own body into an eternal, resplendent prison for the slayer of gods, creating a race of oozes as stewards in the process.

At first, these beings, dissolving most materials, were basically stuck in a type of stone age – but ingenuity and an abundance of divinely infused crystals from their dead, but pretty present god, has allowed them to create their very own, unique technology, advancing in leaps and bounds in spite of their handicap. Now, ages later, the divine energy of Aggranius is faltering, the divine assassin stirs – and it’s time for the puddlings to break their self-imposed isolation.

Now here is the deal – unlike about 99% of underworld races, puddlings…actually are not only cute, they are actually pretty nice guys! Relentlessly curious, they love interacting with outsiders, have a society based on consensus and always have a hat or two available for outsiders. Racial stat wise, puddlings get +2 Int and Con, -2 Dex, are medium, have a speed of 20 ft and speak puddle, their own language. They have acid resistance 5, get +2 to saves versus transmutation spells and effects, +1 to a skill of their own choosing, +1 DC of any transmutation cast. Puddlings with Int 11+ get 3/day mending as a SP. They have darkvision 60 ft. Contact to a puddling body causes 1 point of acid damage to metal, leather and paper equipment, with adamantine and acid resistant equipment being immune to this. They can’t wear armor, but can wear shields, but their body’s membrane can be enchanted as though it were a masterwork armor.

Instead of acid resistance, they can have the option to 1/hour spit acid (1d6 +1 per two character levels) as a ranged touch attack, increased acid damage (faster degrading for items, but retributive acid damage) or no item degrading. Extending the skill bonus to another skill. Now pretty cool: When you wear a magical het, you increase your Charisma, with the bonus scaling the more magical the hat is. Why? Because puddlings use hats to determine leaders for a certain duration. Hilarious and cool. Further enhancing skill bonuses is also possible. Overall, the race is balanced, cool and unique, with the alternate racial traits feeling right regarding their balancing – oh, and yes, age, height and weight tables are included and the race gets neat FCOs for the bard, fighter, monk, rogue, tinker and wizard classes.

The race also sports an array of 8 racial feats that grant light fortification, rerolls for the skills you obsess about (i.e. the ones you’ve chosen via racial traits), critical hits that let you penalize foes via latent telepathy, emit a blinding pulse 3/day, gain increasing armor bonuses, squeeze into cracks and crevices…and there even is an achievement feat that lets outsiders benefit from puddling arcanocrystals.

Which brings me to the puddling’s unique resources – the arcane crystals, which can be used to decrease the costs of item creation. And yes, mining DCs and the like are provided. Arcane gel is interesting – also made from these crystals, it can be used as splash weapon and acts as an amplifier for magic, increasing the damage caused by subsequent exposure of magical energies. Memory crystals are used to keep…well, memories and consensus crystals are used to homogenize opinions – they thus are an integral component of puddling society. Mindtonic is a powerful tonic that can cure insanity and mental attribute drain to mental scores, making that tonic a good reason to travel to the puddling lands. The mugshot crystal can be used to…well duplicate mugshots…or show stretches of places, allowing for easier familiarization for purposes of scrying or teleport: Think of it as a kind of crystalline photo. Obsession enhancers and a costly, droning enhancer for casters complement a cool array of unique items.

A total of 5 different alchemical items can be found in these pages: Bouncers would be crystalline mines that ignore puddlings, while etch gel allows the puddlings to make exceedingly intricate stone work. Peptidoglycan boosters allows puddlings to gain the benefits of potions…and they can be thrown at puddlings, though that does deal a bit of damage to the recipient. The idea of throwing potions at creatures pretty much is awesome. Similarly, geodes that create crystalline caltrops are pretty cool.

The pdf’s magic items are unique as well – Cryslinders, aka “wizard-in-a-can” or “Sunder that first!” are basically gel-based flame/acid/etc.-throwers. And yeah, the visuals are AWESOME and tunable variants are included. Decay-rate decreasing conservation-boxes and then there would be the humongous hat. This hat detects any other hats within one mile and then one-ups then. It sticks to the head of the wearer and also allows the wearer to record a d20 and use the recorded number instead of another roll. Talking poles help communication skills and can enhance the aforementioned blinding pulses of Puddling Fast-Talk. Universal Dictator translate puddle into other languages and the vessel of endless gel does basically what you’d expect.

The pdf also provides a bestiary: At CR 8, Arcanoplasm can absorb magic, also damage items with its attacks and unleash powerful force-damage storms. Damn cool! The CR 1 Blindfish is hard to keep track of and is farmed mainly for the use of its eyes as spell components. Finally, the CR 6 Crystallite is very dangerous to unarmed fighters and these using natural weapons, deals Con-damage (ouch!) and can use crystalline shockwaves – appropriately dangerous for remnants of Aggranius’ consciousness.

Editing and formatting are top-notch, I noticed no significant glitches. Layout adheres to Interjection Games’ elegant 2-column b/w-standard and the pdf uses stock-art apart from the exceedingly cute cover. The pdf has no bookmarks, which constitutes a comfort detriment.

Bradley Crouch is famous for his mastery of crunch and class-design, not for races. Turns out that he excels at the latter as well: The puddlings are awesome. For one, the very concept is novel, fun and unique. More importantly, the race actually PLAYS completely differently from other races: The collective of items and feats makes sure that the race as a whole actually feels completely different from any other race I have reviewed – the crunch actually emphasizes the unique history, society and structure of the society of these lovable blobs of goo. More importantly, they are a breath of levity, of fun and hope in the often pretty grimdark underworld.

How good is this pdf? Well, it’s good enough to actually have introduced them to my main campaign. They are unique, distinct in mechanics and flavor, with each component of content herein emphasizing their unique culture. This is awesomeness and well worth 5 stars + seal of approval, in spite of the missing bookmarks. Get this unique race and bring some serious fun and wonder to your games!

You can get this cool race of unique creatures here on OBS and here on d20pfsrd.com’s shop!