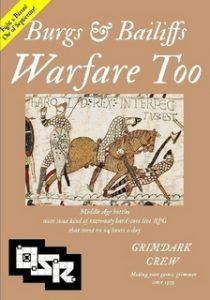 The second installment of the Burgs & Bailiffs-‘zine/series clocks in at 34 pages if you disregard ToC, the introductory explanation of how this came to be, etc. The pages are laid out for pamphlet-size (A5/6’’ by9’’), but there is a difference here that you should be aware of: While the first book sported a two-column standard regarding layout, we get a one-column standard this time around. The font size is also SIGNIFICANTLY larger than the font used in the first installment, which means that there is actually much less content in this one than in the first one. This one also is available exclusively in print, and as such, my review is based on the print version. While the version retains the glossy cover, it is not saddle-stitched, and instead comes as a perfect-bound paperback. However, at $3.70, it is still less costly in print than most pdfs, being sold obviously at-cost.

All right, so this time around, our focus is warfare, a much tighter focus than in the first installment. Another difference herein would be the focus on general OSR-compatibility; there is no longer a split focus between generic OSR-games and AFG. All right, we kick this off with two articles by Lee Reynoldson, the first of which would be the Warlord, a Moldvay class that uses Intelligence and Charisma as prime requisites. The class sports progression, with titles, of up to 10th level, and saving throws are noted vs. death ray, magic wands, turn to stone, dragon breath and spell. When rolling group initiative, a warlord’s side adds +1 and they get +1 to all 3 Charisma bonuses. He may also rally retainers by rolling under Charisma. The class also gets three so-called tactics for minor benefits. As Paolo Greco, mastermind of Lost Pages notes, this makes the class plain worse than the fighter; his suggestion is to “elfify” the class: More XP required for level ups, more power. Personally, I think that more tactics and new ones at higher levels would have really helped the class. As provided, it’s not very interesting.

The second article of the author deals with the Warband and begins with an Old English quote from the Laws of Ine (delightful!). This one thus presents an abstract skirmishing engine, which works as follows: A warband’s stats are derived by taking a look at the majority of the involved combatants, with higher level beings adding a +1 bonus to HD, up to +4. The sample stats are presented with both ascending and descending ACs. A warband’s leader (dwarves, elves, wildlings and shield maidens are provided) can have minor modifications on warband stats like morale etc. The leader’s Cha (here noted as Chr) provides its bonus to morale, while Int bonus is added to to-hit, Move and Initiative. Magic-users add +1 to their unit’s morale, and decrease that of enemies by -1. Skirmishers are also taken into account.

Flanking should yield a +1 bonus, attacks from the back etc. a +2, as well as a -1 penalty to Morale for the unit ambushed thus. The system knows 4 basic formations, which require morale rolls to pull off. Okay, what happens on a failure? The pdf doesn’t say. Two formations require two rounds – Shieldwall and Boar’s Head. Anyways, the formations are basic and generally interesting, but at this level, they are a bit basic.

The pdf then proceeds to codify elements of siege warfare – Hills, ditches (with and without spikes), wooden palisades, gates, ladders, rams…the classics are here, but e.g. the modifications, you know, boiling oil etc. are not covered. All in all, this is a decent, low-complexity system. Nothing glorious, but nice to have if you don’t use warfare all the time.

The next article would be Battlefield Encounters, written by Ghoul Ghast – here, we basically have a sequence of random encounter/encounter elements table. The battle itself is divided into 5 sequences: Upon deployment, missile fire can be determined; then, we move into clash, mêlée, pursuit and flight. Treasure types, general power-levels of beings encountered, etc. are provided here and morale aspects are provided in a concise and pretty useful manner. While we get no full stats, the sequence is still nice, and there is also a little table for encounters during nightfall after battle. An enjoyable article!

Mike Monaco is back with a sequence of two articles that may be connected. The first one of these is basically a means to establish the situation of the PCs, depending if they’re combatant or noncombatant. These represent basically a setting of the scene when we zoom in from e.g. a unit-based system to the individual combat. 8 entries are provided for noncombatants, 10 for combatants. The author proceeds to present a sensible, basic and painless system to determine the outcome of a battle with a single die roll for a quick resolution. Tactics and superiority in numbers and cavalry make a lot of impact here, but it should be noted that there is still a LOW chance to make crazy victories possible, though this remains unlikely, as the math is pretty solid. I enjoyed the example that employed the Battle of Hastings as an example on how this system would have been used for the battle. Nice, painless tool for the GM to have.

From this article, we move on to the lengthiest article regarding page-count: What happens when you’re on the losing side? Basically, you roll 1d20. Noncombatants roll d12, combatants roll a d20. Then you consult a massive table, where each entry has a historical image from the Maciejowski Bible. Hint: There is a big chance you die in a variety of horrible ways. But hey, perhaps you’re just mutilated. Or taken captive. Perhaps. Hey, it beats save or die! Still, the majority of these entries WILL kill you in a variety of grisly ways. Don’t lose. Or at least, have a plan to get out of Dodge.

After this, we look at the last full-length segment of this installment, where Charles Taylor provides the most academic text herein. In it, the cost of building castles, with labor, material, etc. is provided in impressive detail. This segment is system neutral and really interesting, with numbers that have been researched and that, at least according to my history-buff friends, make sense. I loved this one, as I honestly felt enlightened after reading it.

The final page presents two new mundane weapons, penned by Paolo Greco and Benjamin Eisenhofer. Annoyingly, the authors can’t seem to decide on a spelling of the Goedendag (“d” is correct) and the second, the Frankish throwing axe Francisca is one of my favorites. Alas, the latter had the properties of bouncing and hampering shields – something not represented in the rules. I would have loved both weapons to have something to set them apart. Oh well.

Editing and formatting can be considered to be good on a formal and rules-language level. There are a couple of glitches here, but the booklet, as a whole, is readable and solid. Layout adheres to a 1-column standard and, as often for OSR-supplements, is presented in 6’’ by 9’’ (A5). There is one thing to note here: The font-size has been significantly increased in comparison to the first installment, which means that there is a lot less content in this one. Not being saddle-stitched, this one is also a little bit less sturdy, but considering the at-cost price, it is still a steal. There is no free pdf-version this time around.

Paolo Greco, Mike Monaco, Lee Reynoldson, Ghoul Ghast, Benjamin Eisenhofer and Charles Taylor have provided a solid little ‘zine here. If you’re looking for a way to make the experience of war in a medieval context quick, dirty, and really deadly, then this is worth checking out. At the same time, I couldn’t help but feel, even more so than in the first installment, that this would have really benefitted from a unified direction for the articles, from an expansion. Religion and zealotry, as well as potentially magical components are very subdued here, which per se is nice, but also means that quite a few of these sections can use some expansion by the referee. This is, in short, a nice place to start, but at this amount of content, it could have presented a unified and truly concise take on medieval warfare. More formations, a bit more magic…and this could have been a truly inspired supplement, instead of being “just” a solid one. All in all, this is slightly weaker than the first Burgs & Bailiffs. My final verdict will clock in at 3.5 stars, rounded up due to the low price point.