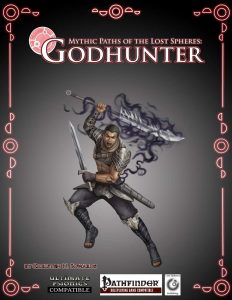 This pdf, obviously, depicts the godhunter, who gains 5 hit points per tier and the devour the divine ability, which may take one of three shapes: You can choose to either spend mythic power as an immediate action to add your tier to a saving throw AND gain a reroll versus a divine effect. On a success, you are not affected and instead heal hit points based on tier, which btw., when exceeding your maximum hit points, can partially be converted to temporary hit points. The second option lets you spend mythic power as an immediate action to collect divine remnants, so-called detria. These act as a means to duplicate, spell-storing style, one divine spell or spell-like ability of a creature slain. These may only be used by the godhunter that created them, and require UMD to activate. This one, RAW, does require a lot of spell/SP-tracking and can become pretty potent. Considering the value of mythic power, I have no issue with the power-level this has, and detria cannot be stockpiled as a balancing caveat. The third option represents the means to spend mythic power for a tier-based bonus to atk, and bonus damage versus divine spellcasters and outsiders. The path nets a path ability every tier and the capstone ability nets basically advantage on saves vs. divine spells cast by non-mythic targets, as well as SR versus divine spells.

Now, as far as path abilities are concerned, we have the option to get another one of the aforementioned devour the divine abilities. We have means to prevent teleportation and plane shifting, or, for example, a means to extend the benefits of the aforementioned attack/damage boost to any target currently affected by a divine spell, which is pretty interesting. Making detria behave as potions is nice…but I really like the means to for example steal channel energy uses. The path abilities also include interesting passive abilities – like divine spellcasters needing to save versus their own spells when targeting the godhunter, potentially being dazed for a round. Minor complaint here – the ability only specifically mentions targeting, meaning that area of effect effects not necessarily being included. Extending the benefits of the healing option to allies targeted nearby. Reducing the CL of hostile divine spells to determine duration is also nice – though I *think* that rounds reduced to 0 should probably cancel out this component; that, or have a 1 round minimum duration. Cool: There is an ability that lets you hijack divine spells. Item-use, transfer wounds.

Among the 3rd tier abilities, we have the means to employ metamagic feats via the burning of detria; imposing basically disadvantage (roll twice, take worse result) on concentration checks is intriguing. Leeching off excess healing in the vicinity. On the nitpicky side, the Hungry Zeal ability, which nets another use of the Zealotry ability, should specify the requirement of the Zealotry ability. Limited domain poaching and becoming immune to a domain of a vanquished spellcaster makes for some cool tricks – particularly since the latter is balanced, once more, by tier, having a sensible scaling. In short, as before, this offers further upgrades, building on previous tricks. The 6th tier abilities include means to hold more detria at once, as well as the option to use detria for Item Creation purposes…or what about tattoos infused with detria that render you immune to a divine spell, with the maximum spell level gated by tier?

Editing and formatting are very good on a formal level; on a rules-language level, the pdf is also significantly more precise than what we usually get to see. Considering the complexity of the material, this is commendable. Layout adheres to a solid two-column full-color standard, and the artwork featured is original and impressive. The pdf comes fully bookmarked for your convenience.

Christen N. Sowards’ Godhunter is an interesting and long overdue means for mythic characters to depict the foe of certain gods…or, well, all deities! I like this mythic path very much, and while I am not 100% happy with all design-decisions herein, I consider this mythic path to be well worth checking out. My final verdict will hence clock in at 4.5 stars, rounded up due to in dubio pro reo.

You can get this mythic path here on OBS!