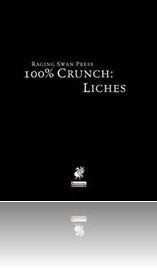 The latest installment in Raging Swan Press‘ 100% Crunch-series deals with liches and is 56 pages long, 1 page front cover, 2 pages editorial, 1 page ToC/foreword, 1 page advertisement, 1 page SRD and 1 page back cover, leaving us with 49 pages of content, so let’s check this out!

Now the first two 100% Crunch-books were nice, handling skeletons and zombies, but providing a book full of lich-stats is a completely different task. As any GM can attest who ever ran a high-level game, statting these (or any spellcasting-heavy opponent, really) can be a mayor pain in the behind. The liches in this book span the range from CR 12 -20 and are organized in a nice table in the beginning of the pdf for your convenience.

As is the tradition with 100% crunch, we kick off with a basic step-by-step elaboration of the monster at hand and in the lich’s case no such look would be complete without taking phylacteries, atrophied liches (who remained inactive and thus lost much of their prowess) and also get a handy list of creatures from the three bestiaries that may make for memorable liches, including their sources. The pdf also features the template for the forsaken lich and the unliving bard, unliving druid and unliving ranger archetypes meant for skeleton lords, vampire or similar undead that have an innate drive and intelligence and, of course the dread demiliches and awakened demiliches.Not all too much has been done with these undead archetypes and they feel more like an afterthought to me than a full-blown feature.

Well, and after that, we get liches – 42 of them, to be precise. Starting with an elf magus lich and continuing with wonderfully non-standard choices like dwarf oracle liches and even a succubus sorceror and a pugwampi druid lich, we get a nice array of unusual choices, which go well with the, of course, also covered sorcerors, wizards, clerics etc. It should also be noted that the spell-selection has en lovingly personalized for the liches and domain spells, archetypes etc. supplement both th more common liches and e.g. beings like undead drider-bard-liches. PrC-wise, we also get a dragon disciple lich that maxed out the PrC, a high-level pugwudkie druid lich, an oracle demilich, draconic liches etc. – a lot of variety, though one casting class is rather absent – I would have loved to see a lich-variant for the summoner, but none is provided. Oh well, one can’t have everything now, can one?

Editing and formatting are top-notch, I didn’t notice any glitches. Layout adheres to RSP’s elegant b/w-2-column standard and the pdf comes in two versions, one optimized for use with tablets and one for use with desktop-PCs. The layout of this issue of 100%-crunch features admittedly some white space, but not overtly much and all in the service of providing all necessary stats for the respective lich on one pages, thus making the pdf more printer-friendly to use, so I guess that’s ok. The pdfs are all fully bookmarked.

A timesaver beyond timesavers, this pdf is much, much more useful than its predecessors due to the significantly more complex nature of the creatures covered – oh, and it is longer, too! Author Julian Neale has also taken the high road of not recycling spell-lists and instead offers us a diverse and yet viable selection of magical arrays for the undead menaces. Sounds great? Yeah, with one caveat – the archetypes for undead bards, druids etc. just feel slapped on, not taking e.g. animal companions into account. Worse, the respective liches like druids also lack stats for such companions. Oh, and bards – don’t get any masterpieces – which is lame. While the stats are solid, the extra-information and care that would include such options is simply lacking from the pdf and thus, I’m forced to settle on a verdict of “only” 4 stars for what would otherwise have been a 5 star+seal-product.

100% Crunch: Liches is available from: