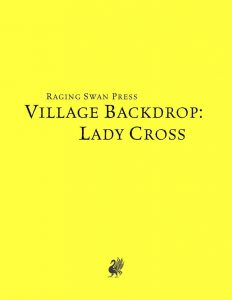 Indeed, the village turns out to be a rather safe place…most of the time. At the same time, the shadow of the tragedy hinted at looms prominently over the village and represents a ticking timebomb of sorts.

Now, this supplement, structurally, follows the evolved form of Village Backdrops, providing a massive 20-entry table of local color events and dressing to make the village come to life. This also is mirrored in the fluff-only write-ups of the 2 NPCs, who come with a brief read-aloud description and mannerisms and personality. They have btw. been assigned proper old-school class designations. The read-aloud sections also extend to the write-ups for the nine notable locations. The village has an expanded sidebar, courtesy of its focus on beverages, which was something I enjoyed. Objects available for purchase are noted in their respective locations and the village has some additional adventuring potential:

This is the first file by Robert Manson I’ve read and I confess to being positively surprised. The village has a strong identity and angle that I enjoy; the fact that it basically is an adventure waiting to happen, that it can be run as a backdrop, has a dungeon-angle and one for investigation, as well as a nice complicating factor, makes this structurally well-executed. Now, while I did complain about the rather vanilla nature of the adversaries in the PFRPG and 5e version, I could field, in theory, the same complaint against the system neutral version – the OSR-games out there sport a ton of more interesting creatures. However, this is designated as the system neutral version and as such, complaining about wanting a deeper or more interesting rules-component would not be fair in the least. As such, the pdf works imho best in its system neutral version, as there is no system-immanent shortcoming in representation to complain about. Hence, my final verdict for this version will clock in at 5 stars.