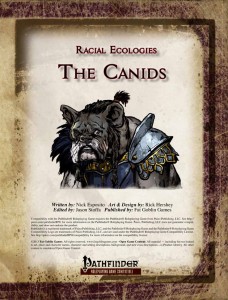 This installment of the Racial Ecology-series is 17 pages long, 1 page editorial/front cover, 1 page SRD, leaving us with 15 pages of content, so let’s take a look, shall we?

Canids are, surprise, canine humanoids that usually, much like man’s best friend, accompany other races – their communities usually exist in a kind of symbiosis with specific other humanoid cultures. Hard racial-trait-wise, they get +2 to Str and Cha, -2 to Int, low-light vision, scent, a 1d4 bite attack as primary weapon (or secondary weapon when wielding arms), get +1 to Bluff, Diplomacy and Sense Motive with their associated race (I assume a racial bonus, but the pdf doesn’t say), +2 to perception and survival, can run on all 4s when carrying nothing in their hands. This would net a +10 foot bonus to movement for run, charge or withdraw actions. They can only do so while having medium load or less – and I assume they don’t get a quadruped’s usual bonus to encumbrance. To reflect their racial diversity, they can pick one alternate racial trait or a racial trait of 2RP or less and they do thankfully have some limitations applied to the selection. Still, I’m not 100% comfortable with this variety – why? Because the race is well-balanced on the upper echelon of the power-scale sans these and the ARG’s system is notoriously broken.

On the alternate racial trait-front, we get to choose from 3 different ones – Bully build nest you the slow but steady racial trait and replaces the quadruped sprinting, whereas aforementioned diversity can be offset with a whopping +4 to CDM versus bull rush, trip, pull and drag. Finally, there are small canids that get, apart from their size-modifiers, +4 to stealth.  We also get 5 race traits that allow you to run longer, drag something better (not the maneuver, the feat of strength), improved disguising, 1/day +2 to flanking and adaption to cold climates make for compelling race traits that manage to be useful without being overpowered and also offer a nice bit of fluff each – kudos for getting these right!

On the favored class option-front, all of the Paizo-classes (minus variants like ninja/samurai, but including the gunslinger) are covered with sensible options. Oh, and thankfully we get FULL AGE, HEIGHT & WEIGHT-tables, 6 entries for various physiques – neato! Also cool – a short lore-table is included!

We also get 6 new feats – improving bite attacks by one step and later, vicious bite allows you to chose to make your canid benefit from improved grapple when biting or gain the trip option. Finally, the third feat in the bite-chain allows you to inflict bleed damage or thrash bitten adversaries – the latter has a hick-up in the rules-vocabulary, when it allows you to either deal bonus damage or inflict the “shaken effect” – which should be “condition”. Also, the pdf fails to specify for how long the shaken condition lasts. Improved overland hustling is also a neat idea, as does the idea fit that canids may follow tracks at normal speed. The feat does have a hick-up, when it specifies that it allows them to follow tracks at twice their normal speed at -20 – one can already do that sans the feat. I assume, the penalty was supposed to decrease, but whatever the correct new number, it’s not in here. “Scent the Impossible” on the other hand is rather awesome – not only does it improve the option to track by scent, it allows the Canid to be particularly familiar with specific scents – these can then be picked up even in olfactory nightmares and overpopulated places – a great idea, also regarding storytelling.

We also get 5 new mundane pieces of equipment – from dog whistles to muzzles, extra teeth, a weight harness and even a neck barrel. Among the two new magical items, we get a silence-inducing, damaging dog-whistle and a breath weapon granting hell hound tooth that may enhance a canid’s bite.

Now Canids are diversified and hence we get no less than 13 different variants, all with their own racial qualities:, ancestry, suggested starting languages and fluff

Ratters get +2 Dex and Cha, -2 Int, +1 to CMD/CMB (+2 when surprised, flatfooted or prone) and while small, they still get a movement rate of 30 feet. Wardens get +2 Str and Wis, -2 Cha, +2 to resist fear and demoralize effects and aforementioned grounded racial trait. Hunters get +2 Str and Wis, -2 Int, Hunt on the Run as a bonus feat and +2 to perception related to smell/scent. Dwarven Bullys get +2 Str and Wis, -2 to Dex, must take the bully-build racial trait and replace low-light vision with darkvision. I assume the default 60 ft. range for darkvision, but the pdf does not specify. Elven Hounds get -2 to STr, +2 to Dex and Int get a flat-out ovement-rate of 40 feet (and don’t get faster when going on all 4s – which is weird) and +1 to reflex saves and initiative. Goblin Curs get +2 to Dex and Wis, -2 to Str, are small, cause allergic reactions in non-goblinoids and get +1 to atk and damage versus other canids and dogs. Gnomish ratters get +2 to Dex and Cha, – 2 to Int, are small and get hatred versus reptilian and goblinoid adversaries. Hafling Borzoi get +2 Dex and Wis, -2 Int, Hunt on the Run as a bonus feat, exchange scent for 40 foot movement rate and +4 to see through nonmagical disguises.

Drow Demon Dogs get +2 Str and Cha, -2 Int, darkvision and replace their quadruped ability with a base-speed of 40 feet – again, somewhat weird that the offshoot is not faster on all fours. They also get +1 to intimidate and +2 to saves versus disease, though they do pay the relative power with losing more basic canid racial traits. Kobold Warren Dogs get +2 Con and Cha, -2 Str, are small and still have a movement rate of 30 ft and replace low-light vision with darkvision (again not specifying the range). Orc War Mastiffs get +2 Str and Wis, -2 Cha, replace low-light vision with darkvision (this time the 60 foot range is included) and they also get ferocity, but pay for that with losing access to racial diversity and light sensitivity. Painted dogs get +2 Str and Cha, -2 Int, hatred versus Gnolls and hyena-like creatures and +4 AC versus Gnolls. Finally, the small Xolo get +2 Dex and Wis, -2 Cha and these hairless dogs are under a constant endure elements spell-like ability (that does not specify an effective level and is not properly italicized) and may woodland stride in familiar jungles.

Editing and formatting are okay – there are a couple of formatting glitches, which partially make the respective crunch slightly less clear than they ought to be. Layout adheres to a drop-dead-gorgeous 2-column full-color standard and the original pieces of full color artwork are simply awesome. This is one beautiful pdf. The pdf comes fully bookmarked for your convenience. The pdf lacks bookmarks, which is an unpleasant comfort-detriment.

Author Nick Esposito has created an interesting race, slightly on the upper end of the power-scale, but not by much. While the racial diversity utilizing the broken ARG can be potentially problematic, per se the variants feel well-balanced and diverse, if admittedly not all of them are brilliant – more weird breeds with unique abilities like the Xolo or the Goblin Cur’s allergies would have elevated this pdf further. Per se we get a solid race that has a lot, but in practice is haunted by quite an array of typos and minor glitches. The rules-language, while for the most part non-ambiguous, features several flubs like lacking durations for conditions, calling conditions effects etc. – nothing big per se, but they do accumulate over time to a point where they stand out and show that a tighter editing would have helped this pdf. Beyond that and the missing bookmarks, there is not much to complain about – as presented, this pdf’s Canids are definitely useable and per se a relatively nice, if not always inspired race. Hence, my final verdict will clock in at 3.5 stars, rounded down to 3 for the purpose of this platform.

You can get this nice racial supplement here on OBS and here on d20pfsrd.com’s shop.