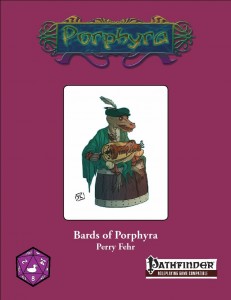 After a short introduction in regular text and a nice piece of in-character prose, we are introduced to the cantor archetype – an bard archetype with strict taboos that prevent taking e.g. the extra bardic performance or extra channel feats (though other channel feats are eligible). In an interesting twist, they are not proficient with most weapons and taboos also influence said choice, though they receive two-weapon fighting when using a quarterstaff (and only a quarterstaff). At 4th level, cantors may channel energy at their class level -3, with one channel eating 3 rounds of bardic performance. Add to that a nice improved aid another boost for skill use in combat. An elegant, short archetype. Nice performance by author Perry Fehr. Haha Okay, I’ll put a buck in the bad pun jar.

The Holy Fool does not learn bardic knowledge, but may add a limited array of cleric spells to their bard spell list, improved will-saves and at 5th level, access to a single subdomain or domain at class level-4 and at high levels, duplicate symbol of stunning for a serious amount of bardic performance rounds. Solid and no one’s fool. Sorry, couldn’t resist. The Gagaku are masters of a zither-like exotic weapon, the 6-stringed Yamamogoto, a string instrumen that becomes enhanced over their levels as a ranged composite shortbow re str-rating. Additionally, they are more proficient at dodging ranged attacks and do not provoke AoOs in melee with it. On a nitpicky side, once, the archetype is called arrow courtier instead of Gagaku, but that does not influence the functionality of the pdf. An archetype that may not be the strongest choice, but which is high in concept – and honestly, I like it.

The Howler archetype exclusively for Gnoll and Catfolk. Instead of a regular bardic knowledge, these guys can yowl – a sound that requires concentration-checks from all that hear it at increasing penalties to cast spells and use skills. It can be maintained as a standard action up to 30 minutes per level, meaning the class probably won’t run out of yowling. Where things become probematic would be with the range – it’s a friggin’ mile. And while allies only take half penalty,, this one requires nerfing -it does not provoke AoOs. It does not even count as language-dependant or mind influencing. This one needs a whack with the nerf-bat, though I like the ability’s concept.

The Laulajan may not learn spells the bard has in common with the inquisitor or paladin, but may add select wizard and witch spells to their lists. They may also take metamagic feats and apply them to their spells in lieu of bardic performances. Yeah, not that blown away either. Limited reduction of metamagic-increased spell levels and unlimited, at will ghost sounds are somewhat nice. Solid. The Muzzein could have been an insensitive archetype, but isn’t – using bardic performance to temporary power blindsense and calling to worship would be nice – the Call to worship increases the DC of saves versus the spells of allies, damage of the same or duration. The latter proves problematic – what about instantaneous spells? multi-round effects that change what they do over the duration of the spell? That’s very problematic and requires A LOT of clarification. Still, once if this was clarified, the archetype would be rather cool.

We also are introduced to 7 new bardic masterpieces that include e.g. an homage to “The music of Eric Zann”, a defensive, obscuring swirl of leaves, snow or sand or damage undead sans save. All in all, nice masterpieces.

Temporarily upgrading channeling via bard spells makes for a nice idea and the 9 new magic items also are rather cool – from magic masks to bardic performance-powered instruments – a nice array here, though the artwork of the air sitar mysteriously seems to have vanished from the pdf. We close the pdf with a sample Cr 11, level 12 Holy Fool sample NPC.

Editing and formatting are okay, though I noticed a couple of non-standard, not broken, but less than optimal wording choices and minor formatting glitches. Layout adheres to Purple Duck Games’ two-column standard and is rather printer-friendly. The pdf comes fully bookmarked with extensive nested bookmarks.

Perry Fehr’s take on bards is steeped in awesome, cultural allusions and high-concept ideas, like in most of his writings. This time around, the significant majority of his ideas properly pay off – with high-concept archetypes that mostly work, we may have a couple of issues that require further streamlining, but the majority of the content herein is rather cool and enriches one’s game via uncommon ideas. the channel/divine-synergy ties in well with the new content and generally, especially for the low asking price, this indeed can be considered a worthwhile, if not perfect purchase. Hence, my final verdict will clock in at 3.5 stars, rounded up to 4 for the purpose of this platform – not only for people interested in Porphyra, but for everyone that is looking for culturally and mechanically distinct bards.